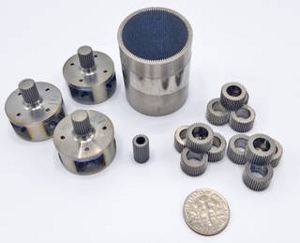 Many exploration destinations in our solar system are frigid and require hardware that can withstand the extreme cold. During NASA's Artemis missions, temperatures at the Moon's South Pole will drop drastically during the lunar night. Farther into the solar system, on Jupiter's moon Europa, temperatures never rise above -260 F (-162 C) at the equator.

One NASA project is developing special gears that can withstand the extreme temperatures experienced during missions to the Moon and beyond. Typically, in extremely low temperatures, gears (and the housing in which they're encased, the gearbox) are heated. After heating, a lubricant helps the gears function correctly and prevents the steel alloys from becoming brittle and, eventually, breaking.

NASA's Bulk Metallic Glass Gears (BMGG) project team is creating material made of "metallic glass" for gearboxes that can function in and survive extreme cold environments without heating, which requires energy. Operations in cold and dim or dark environments are currently limited due to the amount of available power on a rover or lander. 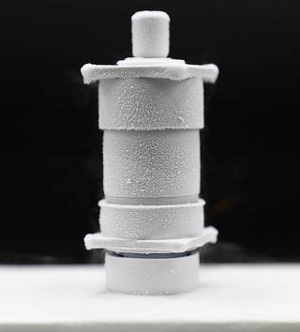 Metallic glass is a solid metallic material with disordered atomic-scale structure. The unique composition and amorphous atomic structure of the BMGG project's metallic glass alloys make them tougher than ceramics and twice as strong as steel, with better elastic properties than both.

Currently, there are no materials specifications available that define acceptable ranges for the constituent components and minor elements in the BMGs that enable these gearboxes. NASA is working closely with industry to develop those specifications and mature a supply chain for the BMG alloys. An important benefit of using BMG alloys is that components can be directly molded from the material, and the supply chain for such gearbox components is also maturing.

The BMGG unheated gearboxes will reduce the overall power needed for a rover or lander's operations, such as pointing antennas and cameras, moving robotic arms, handling and analyzing samples, and mobility (for a rover). The power saved with the BMGG gearbox could extend a mission or allow for more instruments.

The team recently tested the gears at NASA's Jet Propulsion Laboratory in Southern California. At JPL's Environmental Test Laboratory, engineers mounted the motor and gearbox on a tunable beam designed to measure the response an item has to a shock, or forceful impact. Team members then used liquid nitrogen to cool the gears down to roughly to -279 F (-173 C). Next, they fired a cylindrical steel projectile at the beam to simulate a shock event.

Andrew Kennett (left) watches as Dominic Aldi (right) uses liquid nitrogen to cool a motor-integrated bulk metallic glass gearbox prior to shock testing it. The motor and gearbox are inside the frosty metal "bucket" that contains the liquid nitrogen. The tooling, including the "bucket" is designed to be mounted both vertically (shown) and horizontally on the cube for testing the motor and gearbox in three orientations. [Credits: NASA/JPL-Caltech]

Shock testing is used to ensure spacecraft hardware will not break during events that cause a sudden jolt, such as the release of an antenna or what a spacecraft experiences during entry, descent, and landing. The test simulated how the bulk metallic glass gears might behave when collecting a regolith sample during the lunar night -- which spans roughly 14 days on Earth -- or deploying a science instrument on an ocean world in our solar system.

"Before NASA sends hardware like gearboxes, particularly those made with new materials, to extremely cold environments, we want to make sure they will not be damaged by the stressful events that occur during the life of a mission," said Peter Dillon, BMGG project manager at JPL. "This shock testing simulates the stresses of entry, descent, and landing, and potential surface operations." 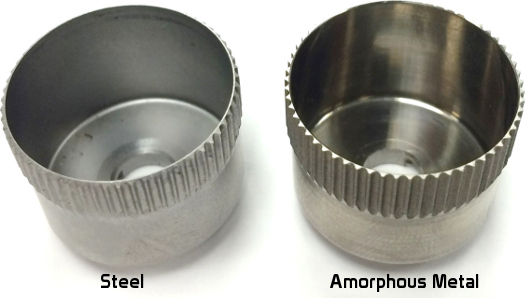 Amorphous metal can be cast into the final shape with no post-casting finishing steps required. Precise teeth shapes can be incorporated into the mold and replicated near perfectly into the castings. Certain alloys of amorphous metal (metallic glass) also have extremely good elastic, contact stress, and galling properties for this application. [Image credit: NASA]

Before each shock test, a team member poured liquid nitrogen over the motor and gearbox contained in a "bucket." Liquid nitrogen, which boils at -320 F (-196 C), brought the gearbox's temperature below -279 F (-173 C). The liquid nitrogen drained and, within a few seconds, a steel impactor fired at a steel beam on which the motor and gearbox were mounted. The team then ran the motor to drive the gearbox to determine whether or not the shock event had damaged the gearbox and its motor. The team monitored the electrical current required to run the motor and listened for any irregular sounds that indicated damage. The motor and gearbox were shock tested twice in three different orientations. Each test demonstrated that the gears could withstand a "shock event" at a temperature as low as -279 F (-173 C). 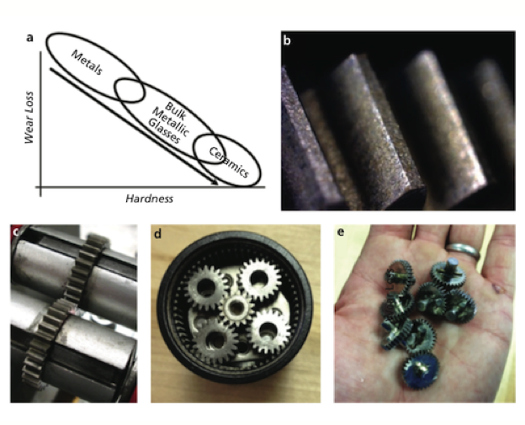 "This is an exciting event, as it demonstrates both the mechanical resilience of the bulk metallic glass alloy and the design of the gearbox," Dillon said. "These gears could help enable potential operations during the lunar night, in permanently shadowed lunar craters, in polar regions on the Moon, and on ocean worlds."

The BMGG team will perform additional cold temperature testing next year to qualify the gears for use in future NASA missions.