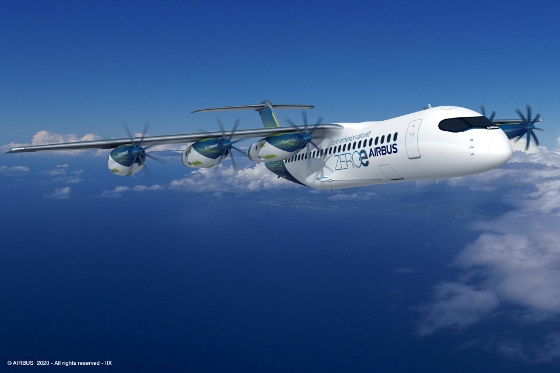 Could passenger planes powered by hydrogen fuel cells become a reality in the future? Airbus wants to find out. The company's latest design feasibility study features an aircraft with a half-dozen eight-bladed, LH2-powered electric propeller "pods" mounted beneath the aircraft wings.

The eight-bladed propellers, made of composite materials, are shaped to provide added thrust during the takeoff and climb-out phases of flight. The advanced airfoil design is expected to lead to improved efficiency and performance.

The study is part of the company's ZEROe program, which aims to enable a passenger aircraft to fly farther than ever without emissions. Smaller experimental hydrogen aircraft, comprising up to 20 seats, can rely on a traditional fixed-wing configuration with two propellers, but more passenger capacity and longer range require another solution. 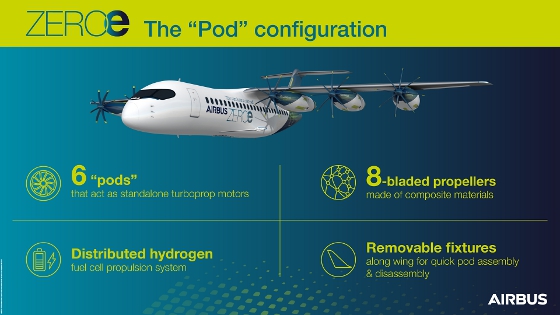 A little background
According to Airbus, in 1838, judge-turned-scientist Sir William Grove came up with a novel idea: to construct a cell consisting of two separate sealed compartments, each of which was fed by either hydrogen or oxygen gas. At the time, he called his invention a "gas voltaic battery." Unfortunately, it did not produce enough electricity to be of much use. It remained a scientific curiosity until the 20th century, when English engineer Francis Thomas Bacon matured the original idea to develop the world's very first hydrogen-oxygen fuel cell in 1932.

Bacon's fuel cell was such a success that it has been used by the space industry to power satellites and rockets for space exploration programs, including Apollo 11, since the 1960s. As the story goes, then-U.S. President Richard Nixon famously said, "Without you Tom, we wouldn't have gotten to the moon."

Today, hydrogen fuel-cell technology is being used for a variety of applications, including to provide emergency back-up power to critical facilities like hospitals, to replace grid electricity for critical-load facilities like data centers, and to power a variety of transportation modes such as cars, buses, trains, and forklifts.

Tomorrow, it could potentially power everything from low-carbon cities and regions to portable computing devices to future zero-emission aircraft.

Technology with a lot of benefits
While the Airbus "podded" engine is not a new concept in aviation, these pods are not designed to be driven by any ordinary propulsion system: hydrogen fuel cells are among the key components.

"The pod configuration is essentially a distributed fuel-cell propulsion system that delivers thrust to the aircraft via six propulsors arranged along the wing," said Matthieu Thomas, ZEROe Aircraft Lead Architect. "Hydrogen fuel cells have very different design considerations, so we knew we had to come up with a unique approach."

Each pod is essentially a stand-alone propeller propulsion system powered by hydrogen fuel cells. It consists of a propeller, electric motors, fuel cells, power electronics, LH2 (liquid hydrogen) tank, a cooling system, and a set of auxiliary equipment. Hydrogen and air are supplied to the fuel cells to generate electric current. Power electronics convert the current to power the electric motors. Thanks to this energy, the motor shaft rotates, thereby turning the propeller.

Similar to batteries, a fuel cell is a device that converts energy stored in molecules into electricity through an electrochemical reaction. Composed of two electrodes (an anode and a cathode) separated by an electrolyte membrane, a typical hydrogen fuel cell works in the following way:

Hydrogen enters the fuel cell via the anode, where hydrogen atoms react with a catalyst and split into electrons and protons. Oxygen from the ambient air enters on the other side through the cathode. The positively charged protons pass through the porous electrolyte membrane to the cathode. The negatively charged electrons flow out of the cell and generate an electric current, which can be used, for example, to power an electric or hybrid-electric propulsion system. In the cathode, the protons and oxygen then combine to produce water as a waste product.

Unlike batteries that need to be recharged, fuel cells can continue to generate electricity as long as a fuel source (hydrogen) is provided. Individual fuel cells can be "stacked" to form larger systems capable of producing more power, thereby allowing scalability. A single fuel cell can produce enough voltage to power small applications, while fuel-cell stacks can be combined to create large-scale, multi-megawatt installations. Because there are no moving parts, fuel cells are silent and highly reliable. 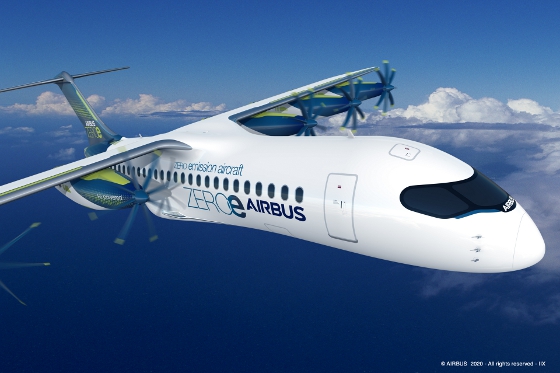 An extra benefit of the pod configuration is its removable fixtures, where each pod can be disassembled and reassembled in record time. This approach could provide a practical and rapid solution for maintenance and hydrogen refuelling at airports.

The Airbus team admits that the pod configuration still requires a lot of work to determine whether it could be a suitable solution. To date, it remains one of many exciting technology options that the company's engineers are considering as they work toward launching their ZEROe program.

"This pod configuration is a great starting point to nurture further inquiry into how we can scale up hydrogen technology to commercial aircraft," said Glenn Llewellyn, VP of Zero-Emission Aircraft. "This is one option, but many more will be conceptualized before we make a final selection, a decision that is expected by 2025."

Airbus' ZEROe concept aircraft is expected to use hydrogen fuel cells to create electrical power that complements modified gas-turbine engines, resulting in a highly efficient hybrid-electric propulsion system. To further explore the possibilities of fuel-cell propulsion systems for aviation, Airbus has entered into a strategic partnership with ElringKlinger, a company with over 20 years of experience as both a fuel-cell system and component supplier. The agreement involves co-developing and co-validating aviation-compatible fuel-cell stacks. In particular, testing the power density of fuel-cell stacks for aircraft will be a key focus area.

"Battery-powered propulsion to fuel larger aircraft over longer distances is not possible with today's technology," said Thomas. "Hydrogen fuel cells could be a great alternative because they can generate -- with zero emissions -- significantly more power and energy for a given weight. This makes fuel cells an extremely interesting technology to achieve our ambitions."