How a novel rocket fuel spawned the ferrofluid industry 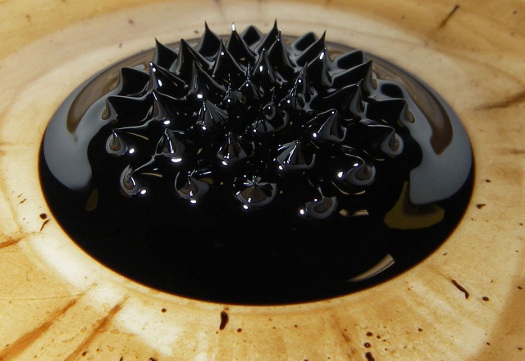 A ferrofluid is a liquid that becomes highly magnetized in the presence of a magnetic field. The distinctive "spikey" shape of a magnetized ferrofluid is caused by the material's need to find the most stable shape in order to minimize the total energy of the system, an effect known as the normal-field instability. [Credits: NASA]

In February 1982, NASA's Inventions and Contributions Board presented Stephen Papell with a $15,000 check (its highest monetary award at the time) for inventing magnetic fluids (or ferrofluids) in the early 1960s. While this technology was originally intended for rocket fuels, Papell's invention has gone on to impact applications in electronics, chemical energy processing, medical advances, and many other industries. 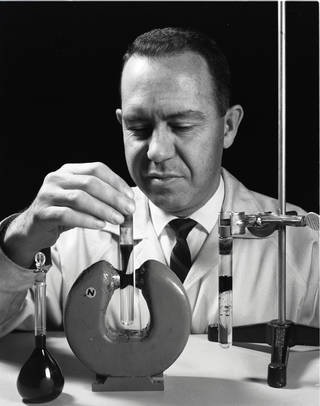 Inventor Stephen Papell demonstrates the effects of a magnetic field on a magnetic propellant mixed with water in 1963. [Credits: NASA]

After serving as an Army Air Corps navigator in World War II, Papell pursued a mechanical engineering degree at the Case Institute of Technology. He joined the NACA Lewis Flight Research Laboratory (today Glenn Research Center) shortly after graduating in 1955.

Initially, Papell worked on the film cooling of turbine blades for aircraft engines. He and a colleague developed the Hatch-Papell Correlation to predict the wall equilibrium temperature needed to determine coolant heat transfer requirements. The equation was later used to design rocket nozzle cooling systems.

With the onset of the space program in the early 1960s, Papell's focus turned to the behavior of fluids in microgravity. Advanced space missions would require spacecraft to restart their engines. It was not yet understood how liquid propellants would react to the absence of gravity. Rocket designers had to make sure that the fuel -- which might settle or disperse inside the tank -- could be pumped to the combustion chamber.

Papell suggested the use of the magnetic fluid to solve the problem. He suspended finely ground iron oxide particles in standard rocket fuel. The activation of an electromagnet near the turbopump would draw the liquid to the intake so the engine could be restarted. The low-density mixture did not break down over time and was easily pumped. Papell received three patents and a $500 NASA award for his invention.

During the same period, however, colleagues discovered that the low gravity of space caused liquids to collect at the center of the tank. Therefore, simpler methods such as baffles could be used to guide the fuel to the pump. NASA decided to contract with the AVCO Corporation to pursue magnetic fluids and redirected Papell's work to heat transfer in cryogenic fluids.

By the mid-1970s, ferrofluids were widely used to cool loudspeaker components and seal rotating shafts. Applications have since expanded to include the improvement of car suspension systems, high-speed printing, petroleum refining, and cancer diagnostics. More recently, a growing number of artists have begun using ferroluids as their medium.

Papell returned to turbine blade cooling in the 1970s and developed a unique blade perforation that facilitated the injection of cooling air. He retired in 1983 after 33 years of government service. Papell passed away at the age of 97 in 2015.