If passenger aircraft are going to fly using only electric power in the future, they need to have more powerful and lighter-weight propulsion systems. Today's electrical systems simply do not meet the necessary power requirements without adding excess weight to the aircraft. A new superconducting and cryogenic experimental demonstrator will explore one way to get there.

Airbus' Advanced Superconducting and Cryogenic Experimental powertraiN Demonstrator (ASCEND) is a three-year project that aims to show that "an electric- or hybrid-electric propulsion system complemented by cryogenic and superconducting technologies can be more than two to three times lighter than a conventional [electric propulsion] system -- through a reduction in cable weight and a limit of 30 kW/kg in power electronics -- without compromising a 97% powertrain efficiency."

The introduction of superconducting materials can lower electrical resistance, meaning that electrical current can supply power with little energy loss. When coupled with liquid hydrogen at cryogenic temperatures (-253 C), electrical systems can be cooled in order to increase the performance of the overall electric propulsion system significantly.

Airbus will use ASCEND to explore the feasibility of these promising technologies in order to optimize a propulsion architecture that is ready for low-emission and zero-emission flight. Results are expected to show the potential for component weight and electrical losses to be at least halved, as the volume and complexity of systems installation is reduced, as well as a reduction in voltage to below 500 V, compared to current systems.

ASCEND will assess electric architectures from several hundred kilowatts to multi-megawatt applications with and without liquid hydrogen on board.

"With the ASCEND demonstrator, we'll adapt ground-based cryogenic and superconducting technologies to a fully electric powertrain to confirm their potential at aircraft level," said Ludovic Ybanez, head of the ASCEND demonstrator. "Integrating these components will not only be a world first, but also an essential step towards future full-scale tests and flying demonstrators."

Airbus will design and build the demonstrator over the next three years at its E-Aircraft System House just south of Munich, Germany. The goal is to get solutions that could be adapted to turboprop, turbofan, and hybrid propeller engines tested and evaluated by the end of 2023. The results will support Airbus' decision-making process for the type of propulsion system architecture required for future aircraft.

ASCEND is also expected to support performance improvements on existing and future propulsion systems across the entire Airbus portfolio, including helicopters, eVTOLs, and regional and single-aisle aircraft. 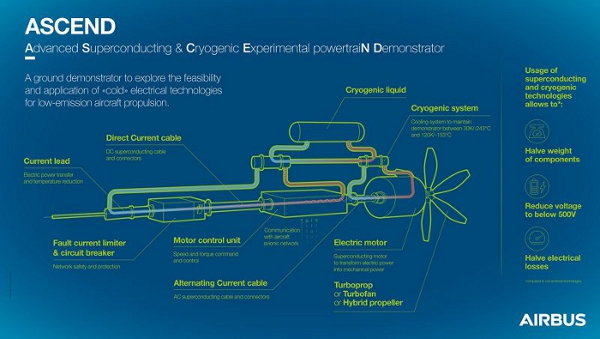 In addition to optimizing the weight of the distribution system, Airbus said another objective of ASCEND is to increase the power density of the propulsion chain significantly. This is a key consideration, as increasing the power of current electrical aircraft systems from a few hundred kilowatts to the megawatts required for a fully electric aircraft is no easy feat. Simply put, more power increases weight and installation complexity, and generates more heat.

However, if a cold source at 20 K (-253 C), such as liquid hydrogen, is available on board, it can be used to cool the electrical systems. The superconducting components can then work to improve the power density of the electric propulsion systems significantly.

Airbus is already looking into how liquid hydrogen could be used as a fuel for an internal combustion engine or fuel cell as part of its ZEROe pre-program. The ASCEND demonstrator should complement this research by providing additional insight into how cryogenic and superconducting technologies can support an ultra-efficient electric- and/or hybrid-electric propulsion system for future aircraft.

The demonstrator is hosted within Airbus UpNext, an Airbus subsidiary created to fast-track future technologies development by building demonstrators at speed and scale.