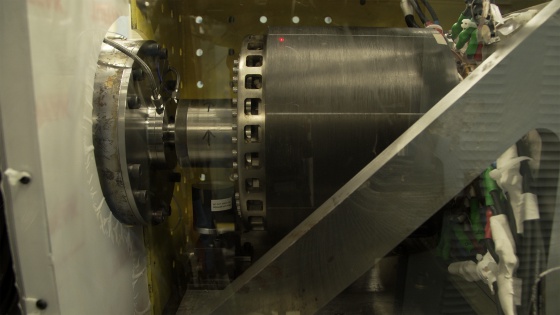 As part of a NASA project, the University of Illinois at Urbana-Champaign's megawatt machine (right) was connected to a dynamometer (left) to test its effectiveness as an electric generator in a safety enclosure at a Collins Aerospace test facility in Rockford, IL. This unusual design has its rotating parts on the outside, so that both the cylinder on the right and the cylinder with arrows spin during operation. [Credits: Collins Aerospace]

A 1-megawatt (MW) electric motor that could help propel future, more environmentally friendly and economically sustainable aircraft was tested during April and May by NASA and its industry and academic partners.

The center of attention is an electric machine that can work either as an electric motor to turn propellers or large engine fans, or a generator to produce 1 million watts of power -- enough to power 760 average U.S. households.

NASA's collaborators in this research include the University of Illinois at Urbana-Champaign (UIUC) and Collins Aerospace.

"NASA is committed to reducing the world's dependence on fossil fuels for transportation through the air," said Andrew Provenza, an aerospace research engineer at NASA's Glenn Research Center in Cleveland. "The technologies we are developing in electrified aircraft propulsion will reduce jet fuel burn and associated emissions."

Studies by NASA and Boeing have shown that machines that functioned as both motors and generators could reduce fuel burn for a wide range of aircraft sizes. To do so they must be lightweight, highly efficient, and able to produce 1 to 2 MW of power.

Two of these machines could fully power a six-passenger aircraft or assist jet engines on aircraft carrying at least 150 passengers -- all while reducing fuel burn, noise, and emissions.

Collins Aerospace was exploring related work under a NASA Research Announcement, so UIUC teamed up to use a Collins facility in Rockford, IL, to test the new machine.

After significant rotor manufacturing issues that resulted in two rebuilds and lengthy delays, the machine was tested as a generator in April, running at partial speed with higher-than-rated power output for that speed.

Producing enough power is not the only metric the machine must meet. It must be able to produce enough power for its weight to be worth including on the aircraft. This is called power density.

Studies showed that this type of machine would need to be at least 96% energy efficient and produce at least 12 kilowatts (kW) (enough for about nine houses) for every kilogram (kg) it weighed.

UIUC's machine exceeded both the efficiency and power density goals, producing 15 kW per kg at over 96% efficiency.

"This motor is operating at a power level with a power density and efficiency better than any motor that we are aware of, even when considering those that are superconducting or cryogenically cooled," said Provenza. "This is a major achievement and a significant step towards the realization of hybrid electric propulsion for large transport aircraft."

Although a mechanical issue damaged the UIUC machine during testing before reaching full power and speed, the team demonstrated their approach for megawatt-scale machines could provide the high performance needed for transport-class aircraft.

The issue had been identified as a risk, and a newer design has already incorporated the solution.

NASA and The Ohio State University (OSU) have also worked on similar machines under a separate agreement.

It's all part of the development of megawatt-class machines.

The UIUC and OSU machine programs have launched future work, and NASA plans to continue maturing new designs that are ready for flight vehicles. NASA is working hard to develop other technologies needed for electrified aircraft propulsion, including power electronics and fault-management devices.

When the components are ready, it will be time for these systems to take to the sky.