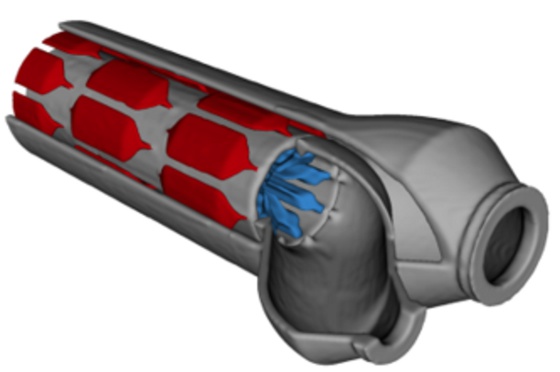 "We developed shape-optimization software to design a high-performance heat exchanger," said William King, professor of Mechanical Science and Engineering at The Grainger College of Engineering and co-study leader. "The software allows us to identity 3D designs that are significantly different and better than conventional designs."

The team started by studying a type of exchanger known as a tube-in-tube heat exchanger, where one tube is nested inside another tube. Tube-in-tube heat exchangers are commonly used in drinking water and building energy systems. Using a combination of the shape-optimization software and additive manufacturing, the researchers designed fins (only made possible using metal 3D printing) internal to the tubes.

With billions of heat exchangers in use worldwide today and even more attention placed on our need to reduce fossil fuel consumption, compact and efficient heat exchangers are increasing in demand, particularly in industries where heat exchanger size and mass significantly impacts performance, range, and costs.

This research was sponsored by the National Science Foundation Engineering Research Center for Power Optimization of Electro-Thermal systems (POETS) and the International Institute for Carbon Neutral Energy Research (WPI-I2CNER).