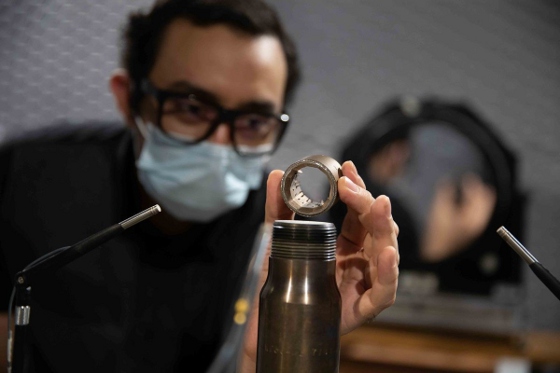 By Michael Miller, University of Cincinnati

Aerospace engineers at the University of Cincinnati (UC) and the U.S. Naval Research Laboratory (NRL) have come up with a new nozzle design for F-18 fighter planes they hope will dampen the deafening roar of the engines without hindering performance.

Distinguished professor Ephraim Gutmark, an Ohio Eminent Scholar, and his students in UC's College of Engineering and Applied Science designed and tested the new nozzles on 1/28th-scale jet engines in his aeroacoustics lab.

The interior of the nozzles features triangular fins like rows of shark teeth that significantly reduced jet engine noise in UC lab tests. The project is a collaboration between UC, NRL, and Naval Air Station Patuxent River. This fall, NAVAIR will test the UC designs and performance on F-18 Super Hornets, the tactical fighter plane used by the U.S. Marines and Navy. "They're simple attachments that change the behavior of the flow coming out of the engine with minimal effect on its performance," Gutmark said.

UC's lab tests showed the new nozzle could reduce engine noise by between 5 and 8 decibels. That might not seem like much, but unlike linear scales such as a ruler where an inch is always an inch, decibels are measured in a logarithmic scale in which 20 decibels is tenfold louder noise.

UC's preliminary lab results hold promise for reducing jet noise in both commercial and military aviation. UC and the Navy applied for a joint patent.

"If the design works with this engine, it can be applied to any other engine with very minor modification," Gutmark said.

Hearing loss and tinnitus are the leading causes of military disability claims, affecting more than 2.6 million former service members, according to numbers from the U.S. Department of Veterans Affairs. The VA spends more than $1 billion per year on hearing-loss cases, which represent about 15% of new disability claims filed with the VA each year.

Jet noise, in particular, represents a serious health risk in military and commercial aviation. According to the Naval Research Advisory Committee, Navy personnel on flight decks are exposed to noise in excess of 150 decibels.

"On aircraft carriers, the crew that works with pilots on the flight deck needs to be very close to the plane when it takes off. Because of the short runway on the carrier, they must operate the engine with afterburners, so it's very loud," Gutmark said.

Jets are so loud that the noise and vibrations can affect even the aircraft itself -- a phenomenon called acoustic loading, Gutmark said.

"By suppressing the noise, you are helping the crew but also helping the longevity of the airplane itself," Gutmark added.

UC has been working on the project with the Naval Research Lab and NAVAIR for two years. The Navy provides computational analysis and aircraft information to complement UC's design and experimental work.

"It was exciting to teach them, because they were really interested," Gutmark said. "They really wanted to know more about what happens when the plane does this or that. And getting feedback from someone who understands what the plane is doing -- practically -- when they're flying was a special opportunity." 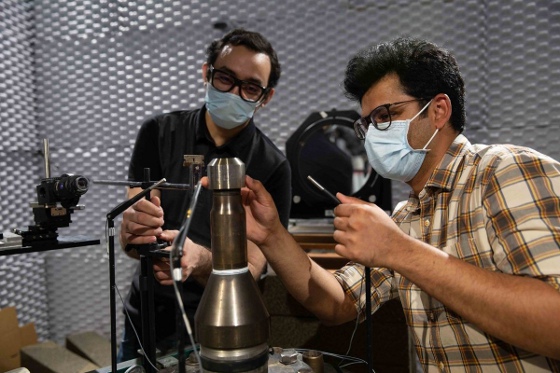 Students in Gutmark's lab wear industrial-grade ear protection when working with the jet engines in a subterranean lab in Rhodes Hall. The engines are mounted to the ground inside an anechoic chamber -- a room designed to completely absorb reflections of acoustic waves. Students can turn on jet engines remotely outside the chamber and use a suite of sensors to measure and analyze the noise from the exhaust plumes.

"In our lab, we have four different measurement techniques, including signal processing through acoustics and optical measurements and laser equipment," UC doctoral student Aatresh Karnam said. "Like any engineering field, you have to adapt multiple techniques to know what data to capture, how to process it, and how to interpret it. That's a difficult challenge."

An array of sensitive microphones surrounds the jet in the chamber. Perhaps not surprisingly, the noise sounds different depending on one's relative position to the jet plume.

"Each one of these components of noise is propagating in different directions," professor Gutmark said. "The microphones are distributed in an arc around the jet so we can detect noise that is going downstream or upstream or sideways."

UC engineers test their novel nozzle designs on both cold and heated jets with exhaust that burns as hot as 1,100 F. The jet is a scale model of the F-18's F404 engine made by General Electric Aviation, headquartered in Cincinnati.

"The afterburner of an actual jet's exhaust will get even hotter," Karnam said. 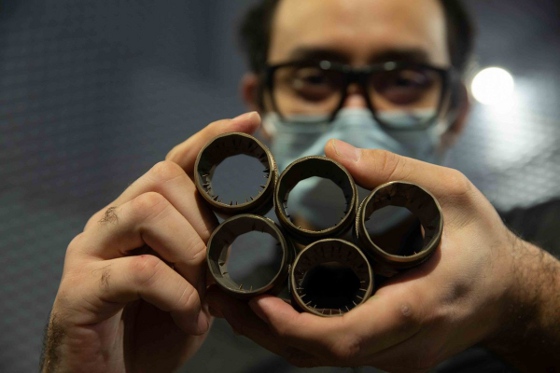 UC doctoral student Mohammad Saleem said aircraft are quieter today than they were just 20 years ago. Both commercial and military aviation have a strong public and financial interest in reducing noise. Even incremental improvements can have a profound impact, he said.

"These noise-reduction technologies are extremely beneficial to the communities living around air bases and personnel working on aircraft carriers," Saleem said.

Saleem said he has always been interested in aerospace engineering and enjoys the challenge presented by such a complicated project as jet engine noise.

"It's a thrill to know you're working on fighter planes. There's a cool factor," Saleem said. "Engineering is about problem solving. The joy is coming up with a system that works. I think that's satisfying."