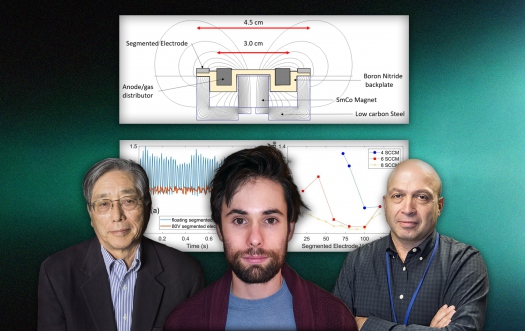 The growing interest in deep-space exploration has sparked the need for powerful long-lived rocket systems to drive spacecraft through the cosmos. Scientists at the U.S. Department of Energy's (DOE) Princeton Plasma Physics Laboratory (PPPL) have now developed a tiny modified version of a plasma-based propulsion system called a Hall thruster that both increases the lifetime of the rocket and produces high power.

The miniaturized system powered by plasma -- the state of matter composed of free-floating electrons and atomic nuclei, or ions -- measures little more than an inch in diameter and eliminates the walls around the plasma propellent to create innovative thruster configurations. Among these innovations are the cylindrical Hall thruster, first proposed and studied at PPPL, and a fully wall-less Hall thruster. Both configurations reduce channel erosion caused by plasma-wall interactions that limit the thruster lifetime -- a key problem for conventional annular, or ring-shaped, Hall thrusters and especially for miniaturized low-power thrusters for applications on small satellites.

What's old and what's new
Cylindrical Hall thrusters were invented by PPPL physicists Yevgeny Raitses and Nat Fisch in 1999 and have been studied with students on the Laboratory's Hall Thruster Experiment (HTX) since then. The PPPL devices have also been studied in countries including Korea, Japan, China, Singapore, and the European Union, with Korea and Singapore considering plans to fly them.

While wall-less Hall thrusters can minimize channel erosion, they face the problem of extensive widening, or divergence, of the plasma thrust plume, which degrades the system's performance. To reduce this problem, PPPL has installed a key innovation on its new wall-less system in the form of a segmented electrode, a concentrically joined carrier of current. This innovation not only reduces the divergence and helps to intensify the rocket thrust, Raitses said, but it also suppresses the hiccups of small-size Hall thruster plasmas that interrupt the smooth delivery of power.

The new findings cap a series of papers that Jacob Simmonds, a graduate student in the Princeton University Department of Mechanical and Aerospace Engineering, has published with Raitses, his doctoral co-adviser. PPPL physicist Masaaki Yamada serves as the other co-advisor. "In the last two years, we have published three papers on new physics of plasma thrusters that led to the dynamic thruster described in this one," said Raitses, who leads PPPL research on low-temperature plasma physics and the HTX. "It describes a novel effect that promises new developments in this field."

Application of segmented electrodes to Hall thrusters is not new. Raitses and Fisch had previously used such electrodes to control the plasma flow in conventional annular Hall thrusters. However, the effect that Simmonds measured and described in the recent paper in Applied Physics Letters is much stronger and has greater impact on the overall thruster operation and performance.

Focusing the plume
The new device helps overcome the problem for wall-less Hall thrusters that allows the plasma propellant to shoot from the rocket at wide angles, contributing little to the rocket's thrust. "In short, wall-less Hall thrusters, while promising, have an unfocused plume because of the lack of channel walls," Simmonds said. "So we needed to figure out a way to focus the plume to increase the thrust and efficiency and make it a better overall thruster for spacecraft."

The segmented electrode diverts some electric current away from the thruster's high-voltage standard electrode to shape the plasma and narrow and improve the focus of the plume. The electrode creates this effect by changing the directions of the forces within the plasma, particularly those on the ionized xenon plasma that the system accelerates to propel the rocket. Ionization turned the xenon gas the process used into free-standing electrons and atomic nuclei, or ions.

These developments increased the density of the thrust by shaping more of it in a reduced volume, a key goal for Hall thrusters. An added benefit of the segmented electrode has been the reduction of plasma instabilities called breathing mode oscillations "where the amount of plasma increases and decreases periodically as the ionization rate changes with time," Simmonds said. Surprisingly, he added, the segmented electrode caused these oscillations to go away. "Segmented electrodes are very useful for Hall thrusters for these reasons," he said.

The new high-thrust-density rocket can be especially beneficial for tiny cubic satellites, or CubeSats. Masaaki Yamada, Simmonds' co-doctoral adviser who heads the Magnetic Reconnection Experiment (MRX) that studies the process behind solar flares, Northern lights, and other space phenomena, proposed the use of a wall-less segmented electrode system to power a CubeSat. A real-world test prototype is in the works for a launch in the near future.