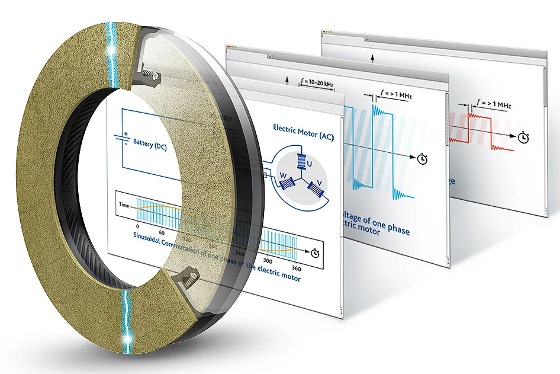 Did you know that some electric vehicle (EV) motors can incur bearing damage over time caused by a phenomenon called electrically induced corrosion? Well, they can, and Freudenberg Sealing Technologies (FST) has a clever and quite simple solution for it.

Electric vehicles with drive systems that operate at 800 V instead of the usual 400 V can recharge the bulk of their batteries in just 15 minutes, producing enough power to drive several hundred miles. The power semiconductors in the inverter ensure that the direct current stored in the battery is converted into the alternating current required by the electric motor while driving. These power electronics are often positioned directly above the electric motor.

A new generation of semiconductors made from silicon carbide is being used increasingly for these 800-V drives, as well as in other electric and hybrid drives. According to FST, these silicon carbide semiconductors switch high currents up to 20,000 times per second. Each of the switching processes causes slight voltage fluctuations. The frequency of these overshoots is 1 or 2 MHz, which puts it in the range of medium-wave radios.

If left unmodified, this frequency is transferred to the rotor shaft of the electric drive and can result in two undesired side effects:

What exactly happens to the bearings? FST described the phenomenon in an online in-house magazine article recently as, "Voltage builds up during driving and then discharges in the bearings, creating minuscule sparks that roll over the balls in the bearings and onto the rolling surfaces. The bearing surfaces are progressively damaged."

"The surfaces are no longer smooth at that point. They are furrowed, which creates vibrations that can be felt and heard," said Prof. Dr.-Ing. Eberhard Bock, vice president, Technology & Innovation at FST, in the article. "A damaged bearing of this kind has to be replaced. In the worst case, the motor breaks down if this is not handled promptly."

Stefan Morgenstern, advance developer at Freudenberg, explained in the video below (at around 3 min. 18 sec) that when the shaft voltage discharges over the bearing, it can create "pitting of the bearings' running surface" over time, which can lead to vibrations, oscillations, and reduced bearing lifetime -- and, ultimately, even bearing failure.

FST calls this damage "electro corrosion" or "electric erosion," and it can reduce the performance and lifecycle of bearings. The phenomenon is similar to the spark-eroding process used in electrical discharge machining (EDM), a subtractive manufacturing process where metal is formed into shape using electrical discharges from electrodes.

FST's solution is a new generation of conductive seals, marketed under the name eCONevo. The product line aims to eliminate both of the undesirable side effects mentioned. eCON is a very thin, conductive nonwoven material that is glued to the radial shaft seal ring. It provides direct electrical contact between the rotor shaft and the motor housing. The unique material blend has a very low AC resistance of about 1 ohm. As a result, the electrical conductivity of the nonwoven material is high enough not only to prevent electro corrosion but also the emission of electromagnetic waves.

An added benefit of the material being so thin -- it is only about 1 mm thick -- is that it provides a ready-made solution for many existing motor designs. Also, since the component prevents electromagnetic interference directly at the motor, it may be able to replace costly shielding in other areas, such as at the drive shafts.

FST says the eCON conductive seals were developed after a French automaker contacted the company back in 2015 about bearing damage "that had occurred over a period of time." The problem was identified as built-up voltage that was sparking. A traditional elastomer seal, one of FST's core competencies, could not provide a solution. Instead, an electrically conductive nonwoven material was developed and firmly attached to the radial shaft seal. FST says this solution directs the current past the bearings.

FST says the eCON conductive seals are already in use and are installed in Europe's top-selling electric car, the Renault Zoe. The seals could also be used in electric motors that are crucial in all types of industries, not just transportation.

"The electrically conductive seal is a small, inconspicuous component," said Morgenstern, "but its impact is enormous." It can eliminate unwanted side effects from electric drives that use power semiconductors made of silicon carbide.

"As a result, the seal contributes to the ultra-fast charging of electric cars and, ultimately, to faster acceptance of electric mobility as a whole," Morgenstern said.