Researchers at the University of Nottingham in the UK have devised a revolutionary new technique for measuring the microscopic elasticity of materials. Known as spatially resolved acoustic spectroscopy (SRAS), the technology works by measuring the speed of sound across the material's surface.

The innovation uses high-frequency ultrasound to produce microscopic-resolution images of the microstructure and maps the relationship between stresses and strains in the material (the elasticity matrix). These crystals are normally invisible to the naked eye, but by precisely measuring the speed of sound across the surface of these crystals, their orientation and the inherent elasticity of the material can be revealed.

In spatially resolved acoustic spectroscopy, a high-energy pulse of light from a laser creates a sound wave that travels along the surface of the material. Precisely measuring the speed of this wave allows the crystal orientation and elasticity to be measured. [Credit: University of Nottingham]

This technology has huge potential in fields such as aerospace to understand the performance of new materials and manufacturing processes. In the future, this will likely launch a new field of research, because the technique provides a completely new way to evaluate materials for improving safety in systems such as jet engine turbine blades or to develop new designer alloys with tailored stiffness. For example, in medical implants, it is vital to match the stiffness of prosthetic devices to the properties of the human body to ensure harmonious operation.

Paul Dryburgh, Optics and Photonics Research Group at the University of Nottingham and co-lead on the study, said, "Many materials (such as metals) are made up of small crystals. The shape and stiffness of these crystals are essential to the material's performance. This means that if we tried to pull on the material, as we would a spring, the stretchiness depends on the size, shape, and orientation of each of these hundreds, thousands, or even millions of crystals. This complex behavior makes it impossible to determine the inherent microscopic stiffness. This has been an issue for over 100 years, as we've lacked an adequate means to measure this property."

"The development of SRAS is a notable breakthrough because it provides the first method to measure the elasticity matrix without knowing the distribution of crystals in the material," explains co-author, Professor Matt Clark, who is also from the Optics and Photonics Research Group. "SRAS doesn't require exacting preparation of a single crystal; it is fast (thousands of measurements can be made every second) and offers unparalleled measurement accuracy. The speed of the technique is such that we estimate that we could repeat all the historical elasticity measurements of the past 100 years within the next six months."

There is a great push for new lighter and stronger materials to deliver more efficient systems. However, finding a new material with the desired properties has been described as a needle-in-a-haystack problem. Along with the stiffness of the material, the elasticity matrix also provides insight into many important material properties that are hard to measure directly, such as how the material responds to changes in temperature. This means the rapid measurement of the elasticity matrix can be used as a "road map" to finding the next-generation materials with superior properties, making SRAS an essential tool in the development of new materials.

Previously, the only way to measure the elasticity matrix was to cut up the component or attempt to grow a single crystal of the material, a process that cannot be done for many materials, such as the titanium alloys used in modern jet engines. Estimates are that less than 200 materials (of the many thousands) have had their elasticity measured. The result is that the elasticity of most industrial materials is unknown, meaning there is significant (and in some cases, potentially hazardous) uncertainty in the actual performance of the material put to use. 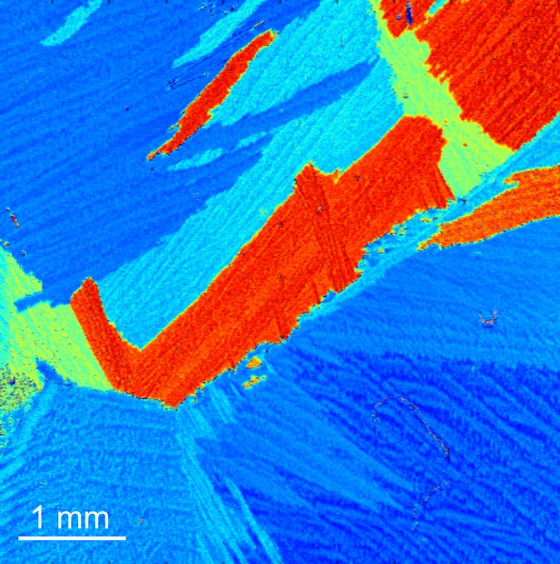 Using the new technique, the crystal structure, which is invisible to the naked eye, can be seen. The color of the regions represents the speed of sound across the surface of that crystal. [Credit: University of Nottingham]

Laser ultrasound, the science of turning high-energy optical energy into sound, allows ultrasound to be created in an extremely small area (200 Âµm, approximately the same width as two to three human hairs). This means the researchers can precisely create sound waves in each of these crystals in the metal one by one; by then measuring the speed of sound across each crystal, they can tell the shape of the crystals and the elasticity matrix of the material at a microscopic scale. Sound travels across the surface of metals 10 times faster than through air (at ~3,000 m/s).

The findings are reported in a new paper, "Measurement of the single crystal elasticity matrix of polycrystalline materials," published in the journal Acta Materalia.