VW Bus is back: All-electric ID. Buzz will also come in cargo version 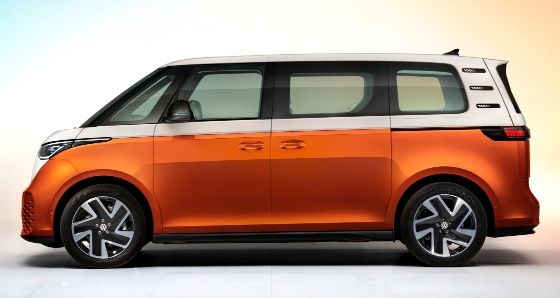 Volkswagen has reinvented its iconic Bus design, and the new all-electric vehicle is called the ID. Buzz. It will be launched in Europe this year and come to America in 2024. ID. Buzz will be available in both passenger and cargo models. It boasts seating for up to seven (long-wheelbase model), a configurable interior, and a chance to feel groovy while living your best van life.

The ID. Buzz and ID. Buzz Cargo are launching in Europe this year as the standard-wheelbase model (117.6 in., which is a little over 8 in. longer than the all-electric VW ID.4 small electric SUV). Both the consumer and cargo models are 185.5 in. long, 78.1 in. wide, and over 76 in. tall. In 2023, extended-wheelbase versions of both ID. Buzz models will arrive on the European market: the U.S. version, arriving in 2024, will be based off the long-wheelbase passenger model. VW has not released stats on the length of the longer version. 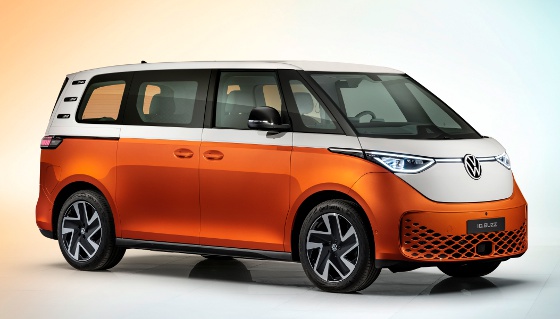 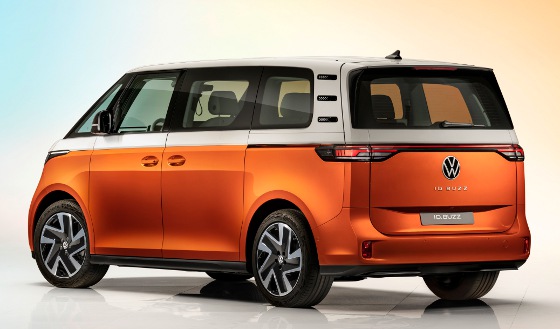 VW says the first European versions of the ID. Buzz and ID. Buzz Cargo will come to market with a high-voltage lithium-ion battery providing gross energy content of 82 kWh (77 kWh net). With its 12 modules, the battery system supplies a 201-hp electric motor that drives the rear axle. Maximum torque of 229 lb-ft is instantly available, and the top speed is electronically limited to 90 mph. More battery versions with various power output levels are expected to follow in 2023.

The battery is mounted in the floor of the vehicle, giving the ID. Buzz agile handling for a vehicle of its size. The charging power when using alternating current (AC) is 11 kW. Via a CCS plug connector at a DC fast-charging station, VW says the charging power increases to as much as 170 kW. With DC-fast charging, the battery charge level rises from 5 to 80% in 30 minutes. Using the latest software, the ID. Buzz model line will offer the Plug & Charge function in the future. As for environmental impact, new ID. Buzz models will forgo using cobalt in the high-voltage battery. 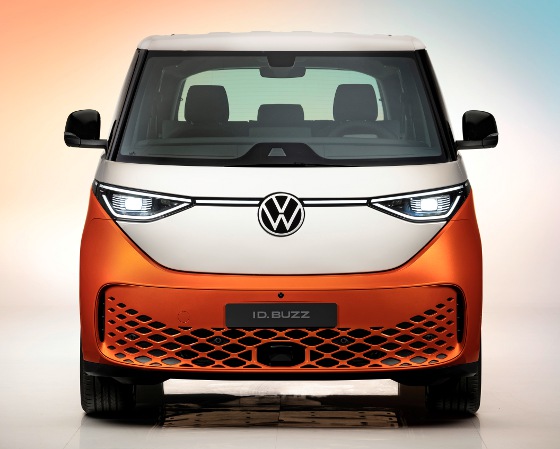 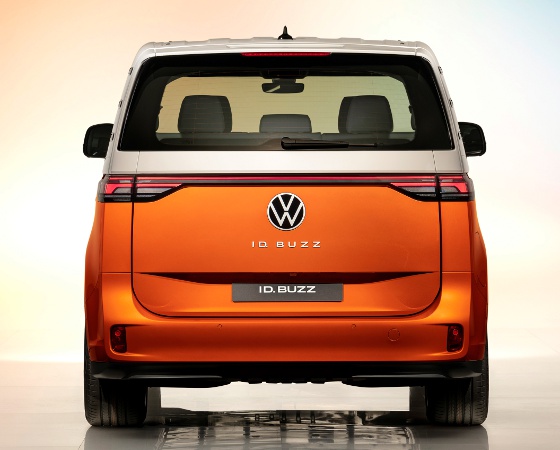 For Europe, bi-directional charging will enable the new ID. Buzz and ID. Buzz Cargo to feed power that users don't need into the domestic grid (vehicle-to-home) or to make the power available for home use in an emergency. The power transfer and communication take place via an optional DC bi-directional wall box.

The build is based on VW Group's Modular Electric Drive Kit (MEB), a large-production-run platform that provides the basis across the brands for all sorts of different models and segments. To date, 30% of all electric vehicles in the VW Group are based on the MEB.

The production version van/bus looks very similar to the concept car shown in Detroit in 2017: extremely short body overhangs, maximum space utilization on a minimal vehicle footprint, a split bodywork design of upper and lower levels, the characteristic front end with its V-shaped hood between expressive headlights, and the unique rear section.

Volkswagen will be offering the ID. Buzz and ID. Buzz Cargo in base colors and various two-tone paintwork finishes for the European market (all featuring organically based vehicle paint), with a total of 11 color variants: seven single-color options (Candy White, Mono Silver, Lime Yellow, Starlight Blue, Energetic Orange, Bay Leaf Green, and Deep Black) and four two-tone options. On two-tone ID. Buzz models, the upper section, including roof and V-shaped hood, is finished in Candy White, while the areas below the character line are in a choice of Lime Yellow, Starlight Blue, Energetic Orange, or Bay Leaf Green. Exterior mirrors and door handles are finished in body color.

Both European ID. Buzz versions will come with 18-in. steel wheels as standard. On passenger vehicle models, aluminum-alloy wheels are available in sizes ranging from 18 to 21 in. Again, options could change with the U.S. models.

The standard-length ID. Buzz will launch as a five-seater. Driver and front-seat passenger sit on individual seats with adjustable armrests. Integrated into the backrests of each front seat is a side thorax airbag, and in the driver's seat there is also a center airbag, which in the event of a crash protects the driver and front-seat passenger from hitting each other. In top trims, the seats are completely electrically adjustable and have both memory and massage functions. A three-person bench seat in the rear can be folded down completely or split 40:60, and it can be moved lengthwise 5.9 in. There are fold-down tables located in the backs of the front seats. An optional height-adjustable trunk floor, which creates a level load space surface, is available. The luggage space measures 39.6 cu ft. Two side sliding doors are fitted as standard. 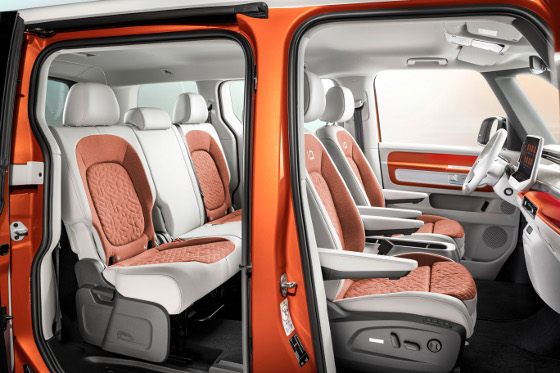 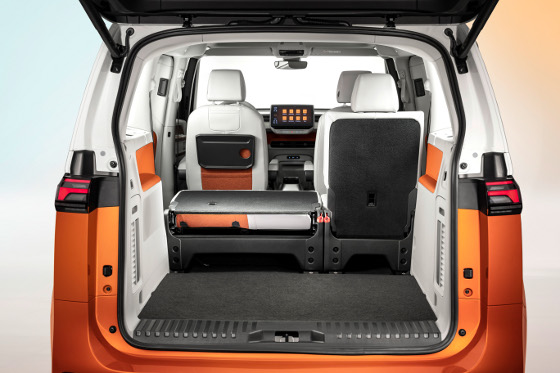 The cockpit of the ID. Buzz is high-tech and ergonomic, with a touch of that lighthearted design style that was a hallmark of the New Beetle. As standard, a 10-in. digital cockpit display is paired with a 10-in. infotainment system. A 12-in. display with navigation is optional. Both the digital cockpit and infotainment system are connected with the instrument panel only at the bottom, looking like free-floating tablets. Beneath the infotainment system is a control bar with digital buttons and touch sliders. The touch sliders are used to regulate temperature and volume, while the buttons provide direct access to menus for the dual-zone Climatronic HVAC settings, driver assist systems, driving profiles, and the parking functions.

An optional movable and removable center console was developed specifically for the ID. Buzz. It contains multi-level storage bins. 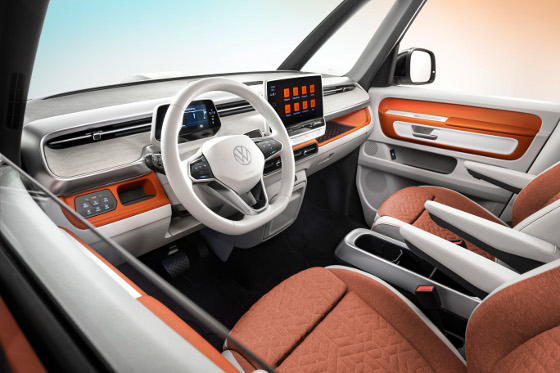 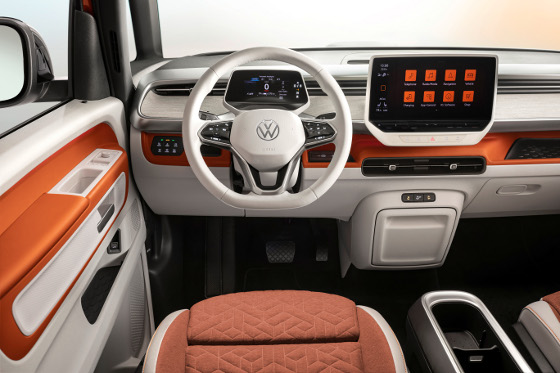 The transmission is operated via a steering column stalk: turn it forwards from the neutral position N to D for drive and back from N to R for reverse. To the left of the multifunction steering wheel, there is an island of digital controls for activating the light functions, as well as heating and defrost for the windshield and rear window. There is a tray for wireless charging, and up to seven USB-C plugs are available in the vehicle.

For the driver, the Buzz comes with the interactive ID. Light feature, which stretches across in front of the windshield to give the driver information based on the color and position of the light signal. A signal in the right-hand area of the strip advises of obstructions, for instance, or a red light signals danger and the need to brake.

The lightshow doesn't end there. The ID. Buzz also features standard 10-color ambient lighting, with 30 colors as optional. The 30-color version lights up a strip in the instrument panel, the decorative strips in the four doors, the storage bins in the doors, and the footwell.

The new ID. Buzz and ID. Buzz Cargo models are being produced by Volkswagen Commercial Vehicles at its main plant in Hannover, Germany. Production of the ID. Buzz at the plant reaches, in parts, an automation level up to 90%.

The majority of the ID. Buzz electric drive system modules being supplied to the plant are also being made in Germany by the Group's own Volkswagen Group Components division. The modules --including the electric motor, the axles, and the battery system -- are being produced at the components factories in Kassel, Braunschweig, Salzgitter, and Hannover. The ID. Buzz is the first model in Volkswagen's family of all-electric vehicles to have Volkswagen Group Components make the axles. 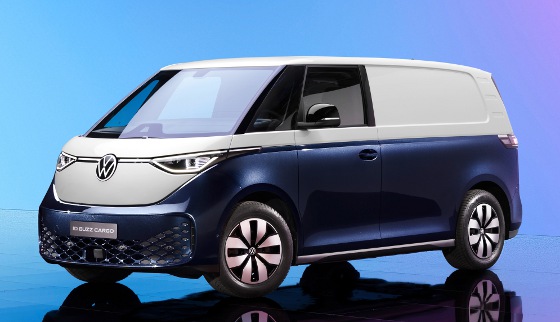 VW says the ID. Buzz Cargo is an ultra-modern zero-tailpipe emission van. It will launch with three seats in the cab as standard -- a driver's seat plus a double bench seat -- and have an optional individual seat for the front-seat passenger. 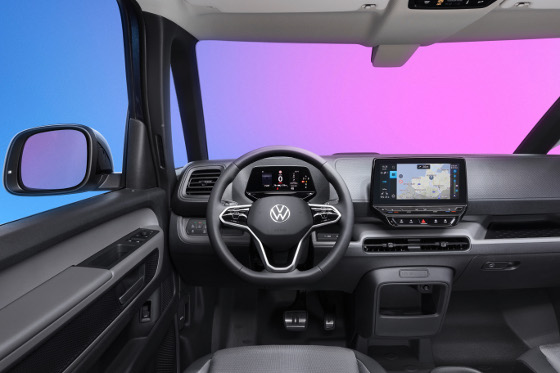 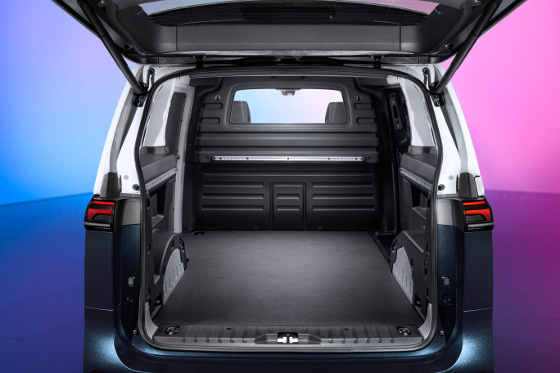 Behind the seats is a fixed partition, separating the cargo space. This partition will be optionally available with a window and an opening for loading items. The cargo space measures 137.7 cu ft, which is just enough room for two euro pallets. Loads can be secured via lashing rings in the floor and bars on the side walls. The new ID. Buzz Cargo is fitted with a wide-opening tailgate and a sliding door on the passenger side. It will be possible to configure the van with a second sliding door as a custom option.

Volkswagen has not released pricing for either model. 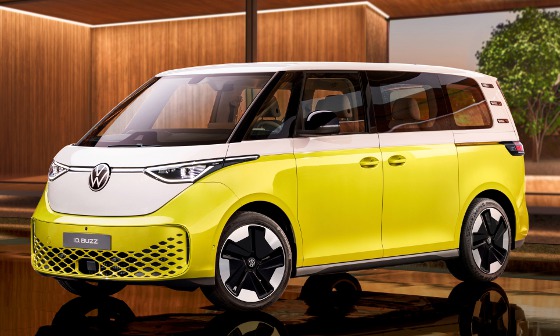 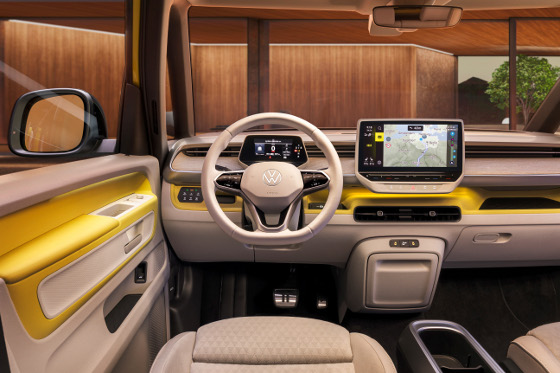 Fun factoid: The ID. Buzz is not the first VW Bus with an electric drivetrain. Fifty years ago at the Hannover Trade Fair, Volkswagen showed a T2 Microbus concept powered by a rear-mounted electric motor with a maximum range of 85 km (52.8 miles).