Researchers at the University of Birmingham in the UK, working in partnership with firms NitroPep Ltd and Pullman AC, have developed a new antimicrobial technology for air filters that can kill bacteria, fungi, and viruses in seconds -- including SARS-CoV-2. The researchers say they have created a potential solution to prevent the spread of airborne infections in many enclosed spaces.

A study published March 9, 2022, in the journal Scientific Reports describes how the air filters were coated with an antimicrobial treatment using a chemical biocide called chlorhexidine* digluconate (CHDG). The treated filters were rigorously tested and compared to commonly used standard "control" filters in the laboratory, in industrial air condensing units, and in a trial onboard trains operating on the UK's railways. Pullman AC provided the filters for the study. 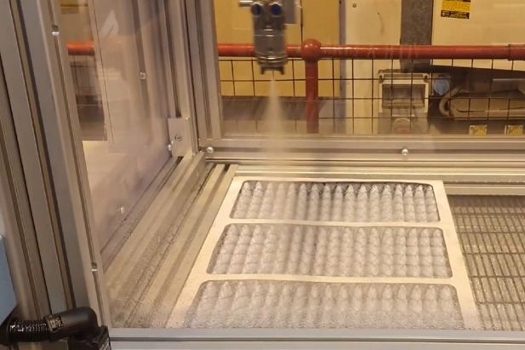 In the laboratory, cells of the Wuhan strain of SARS-CoV-2 (the virus that causes COVID-19) were added to the surface of both the treated and control filters and measured at intervals over a period of more than an hour. The results showed that, while much of the virus remained on the surface of the control filter for an hour, all SARS-CoV-2 cells were killed within 60 seconds on the treated filter.

Similar results were seen in experiments testing bacteria and fungi that commonly cause illness in humans, including E. coli, S. aureus, and C. albicans, proving the novel technology to be both a highly effective anti-fungal and anti-bacterial air filter treatment.

Meanwhile, in order to determine how effective the filters are in a real-world setting, both the control and treated filters were installed in heating, ventilation, and air conditioning (HVAC) systems on train carriages. The filters were installed for three months in matched pairs across carriages on the same train line before being removed and shipped for analysis, with researchers counting colonies of bacteria remaining on them. The trial found no pathogens survived on the treated filter -- even after three months onboard the train.

Further tests also found the treated filters are durable, and they are able to maintain their structure and filtration function over the lifetime of their use.

"Most ventilation systems recycle air through the system, and the filters currently being used in these systems are not normally designed to prevent the spread of pathogens, only to block air particles," said Dr. Felicity de Cogan, Royal Academy of Engineering Industry Fellow at the University of Birmingham. "This means filters can actually act as a potential reservoir for harmful pathogens. We are excited that we have been able to develop a filter treatment which can kill bacteria, fungi, and viruses -- including SARS-CoV-2 -- in seconds. This addresses a global un-met need and could help clean the air in enclosed spaces, helping to prevent the spread of respiratory disease."

According to Dr. de Cogan, while there have been other novel filters to "purify air" -- from high-efficiency particulate air filters used in aerospace cabins to UV light, and silver nanoparticles added to filter mesh -- these have fallen short, as they either lack energy efficiency or speed in effectiveness and are not ideal for the majority of existing HVAC systems, which would require significant infrastructure upgrades to use them.

"In comparison, the technology we have developed can be applied to existing filters and can be used in existing heating, ventilation, and air conditioning systems with no need for the cost or hassle of any modifications. This level of compatibility with existing systems removes many of the barriers encountered when new technologies are brought onto the market."

NitroPep Ltd is further developing the filters to deliver them as a product to the market. The new technology is the latest stage of Dr. de Cogan's ongoing research creating patented antimicrobial technologies, which has included the development of a coating for surfaces called NitroPep that is also effective against SARS-CoV-2.

*Editor's Note: Chlorhexidine is a compound widely used as a topical disinfectant and antiseptic and also used in mouthwashes.