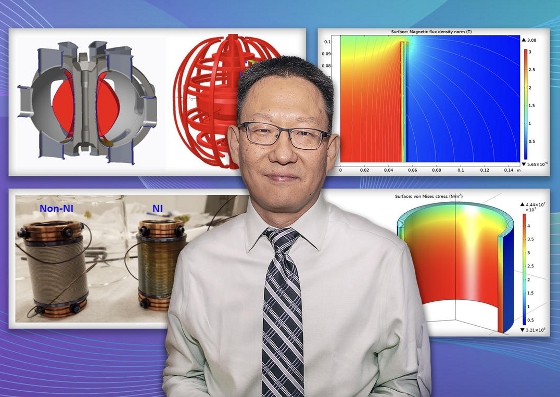 PPPL physicist Yuhu Zhai in front of a series of images related to his magnet research. Clockwise from top left: A computer image of a tokamak fusion facility, two images showing magnetic forces in new superconducting magnets, and a photo of a magnet prototype. [Image credits: Headshot courtesy of Elle Starkman; collage courtesy of Kiran Sudarsanan]

Scientists at the U.S. Department of Energy's (DOE) Princeton Plasma Physics Laboratory (PPPL) have designed a new type of magnet that could aid devices ranging from doughnut-shaped fusion facilities known as tokamaks to medical machines that create detailed pictures of the human body.

Tokamaks rely on a central electromagnet known as a solenoid to create electrical currents and magnetic fields that confine the plasma -- the hot, charged state of matter composed of free electrons and atomic nuclei -- so fusion reactions can occur. However, after being exposed over time to energetic subatomic particles known as neutrons emanating from the plasma, insulation surrounding the electromagnet's wires can degrade. If this happens, the magnet could fail and reduce a tokamak's ability to harness fusion power.

In this new type of magnet, metal acts as insulation and therefore would not be damaged by particles. In addition, it would operate at higher temperatures than current superconducting electromagnets do, making it easier to maintain.

Fusion, the power that drives the sun and stars, combines light elements in the form of plasma to generate massive amounts of energy. Scientists are seeking to replicate fusion on Earth for a virtually inexhaustible supply of power to generate electricity.

"Our innovation both simplifies the fabrication process and makes the magnet more tolerant of the radiation produced by the fusion reactions," said Yuhu Zhai, a principal engineer at PPPL and lead author of a paper reporting the results in Superconductor Science and Technology.

"If we are designing a power plant that will run continuously for hours or days, then we can't use current magnets," Zhai said. "Those facilities will produce more high-energy particles than current experimental facilities do. The magnets in production today would not last long enough for future facilities like commercial fusion power plants."

Electromagnets differ from the simple permanent magnets that hold artwork to refrigerator doors. Electromagnets consist of a coil of insulated wire carrying an electrical current that generates a magnetic field as it flows. Electromagnets are used in devices ranging from tokamaks to cranes that lift smashed cars in garbage dumps and magnetic-resonance imaging devices that scan the interior of human bodies.

Zhai and others have built a prototype magnet and achieved encouraging results. "During our tests, our magnet produced about 83 percent of the maximum amount of electrical current the wires can carry, a very good amount," he said. "Scientists typically only use 70 percent of the superconducting wire electrical current capacity when designing and building high-power magnets, and large-scale magnets like those used in ITER, the international fusion facility being constructed in France, often use only 50 percent."

The new magnets have wires constructed out of the elements niobium, sometimes used in jet engines, and tin. When heated in a special way, these elements form a superconductor that allows electrical current to flow through it at extremely low temperatures with no resistance -- so there is much less need for insulation to prevent current leakage.

"This new concept is interesting because it allows the magnet to carry a lot of electrical current in a little space, reducing the amount of volume the magnet occupies in a tokamak," said PPPL Chief Engineer Robert Ellis. "This magnet could also operate at higher current densities and stronger magnetic fields than magnets can today. Both qualities are important and could lead to lower costs."

All in all, the new development could profoundly benefit the development of fusion energy. "This is a revolutionary change in how you make electromagnets," said Michael Zarnstorff, PPPL's Chief Science Officer. "By creating a magnet with just metal and removing the need to use insulation, you get rid of a lot of costly steps and reduce the number of opportunities for the coil to malfunction. This is really important stuff."

Zhai and collaborators around the country and the world are now working with private industry to further develop an insulation-free prototype. This new type of high-temperature superconductor-based electromagnet could be a foundational component of a pilot fusion power plant.