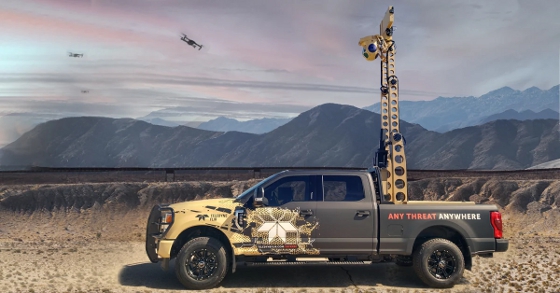 Engineers at Teledyne FLIR Defense have created a powerful drone surveillance system that fits in the back of a standard pickup truck and can detect unmanned systems up to 3 km away -- and it can even execute a radio frequency (RF) kill chain using non-kinetic technology (soft-kill jammer immobilization, as opposed to hard-kill missiles/munitions) with a defeat range of up to 1.5 km horizontal/457 m vertical.

The LVSS ADA C-UAS also can detect drone swarms by allowing operators to monitor up to 500 radar targets simultaneously. A multi-spectral imager captures key UAS elements that help identify high-risk targets for a pinpointed response. Even more impressive, this is on-the-move technology that allows operators to obtain threat assessments while the system is static or while driving the vehicle.

Special consideration has been put into making sure the sensor suite can be quickly deployed (up and running in under 60 sec), stowed (less than 30 sec), and redeployed. High-performing video analytics allow operators to identify, track, and engage threats precisely. The analytics model can also be used to control the camera autonomously. Increased cyber security tools have been integrated to resist hackers. The whole system is run by the new Cameleon V5 command and control software, which integrates all onboard sensors and supports advanced device features and bi-directional communications.