This paper is an overview of the different types of linear motors available, including their principles of operation, history of development of permanent magnets, and design methods for linear motors, and the industrial sectors using each type of linear motor. 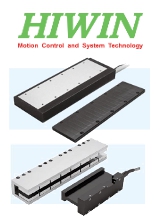 Linear Motor Technology
Linear Motor Technology can be: Linear Induction Motors (LIM) or Permanent Magnet Linear Synchronous Motors (PMLSM). PMLSM can be iron core or ironless. All motors are available in flat or tubular configurations. HIWIN has been at the forefront of linear motor design and manufacturing for 20 years.

1.1 Advantages of Linear Motors
A linear motor is used to provide linear motion, i.e., moving a given payload at a dictated acceleration, speed, travel distance, and accuracy. All motion technologies other than linear motor driven are some sort of mechanical drive to convert rotary motion into linear motion. Such motion systems are driven by ball screws, belts, or rack and pinion. The service life of all these drives is highly dependent upon the wear of the mechanical components used to convert rotary motion into linear motion and is relatively short.

The main advantage of linear motors is to provide linear motion without any mechanical system, because air is the transmission medium. Therefore, linear motors are essentially frictionless drives, providing theoretically unlimited service life. Because no mechanical parts are used to produce linear motion, very high accelerations and speeds are possible where other drives such as ball screws, belts, or rack and pinion will encounter serious limitations.

1.1.1 Linear Induction Motors (LIM)
The linear induction motor was the first type of linear motor invented (US patent 782312, Alfred Zehden in 1905). It consists of a "primary" composed of a stack of electrical steel laminations and a plurality of copper coils supplied by a three-phase voltage, and a "secondary" generally composed of a steel plate and a copper or aluminum plate. 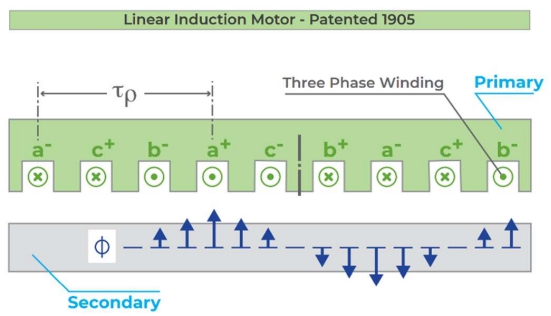 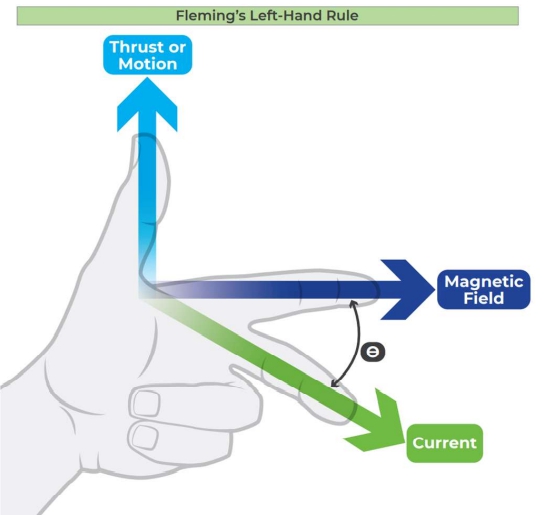 1.1.2 Permanent Magnet Linear Synchronous Motors (PMLSM)
Permanent magnet linear synchronous motors have essentially the same primary as linear induction motors, i.e., a set of coils mounted on a stack of electrical steel laminations and driven by a three-phase voltage. The secondary differs. Instead of a plate of aluminum or copper mounted on a plate of steel, the secondary is composed of permanent magnets mounted on a plate of steel. Each magnet's direction of magnetization will alternate with respect to the previous one as shown in Fig. 3. 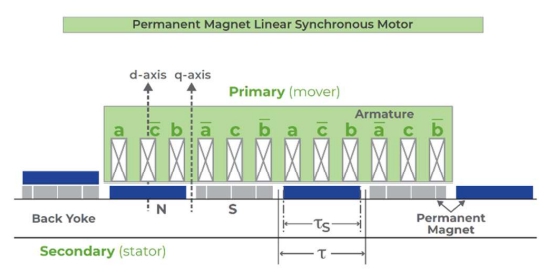 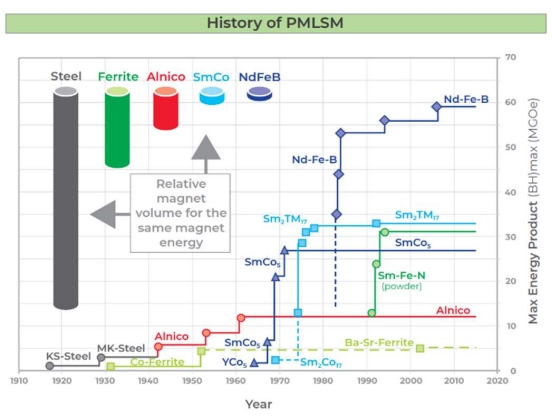 Magnet strength is characterized by its energy product in Megagauss-Oersteds (MGOe). Until the mid-1980s only Steel, Ferrite, and Alnico were available and delivered very low-energy products. SmCo magnets were developed in the early 1960s based on work by Karl Strnat and Alden Ray and later commercialized in the late 1960s. The energy product of SmCo magnets was initially more than double the energy product of Alnico magnets. In 1984, General Motors and Sumitomo independently developed NdFeB magnets, a compound of Neodynium, Iron, and Boron. A comparison of SmCo and NdFeB magnets is shown in Fig. 5.

The magnet losing magnetization will cause the motor to lose force and be unable to meet the specs. If the magnet operates below maximum temperature 100% of the time, its strength will be preserved almost indefinitely. Because of the higher cost of SmCo magnets, NdFeB magnets are the right choice for most motors, particularly given the higher force available.

1.2 Design of Linear motors
A linear motor is generally designed via Finite Element Electromagnetic Simulation. A 3D model will be created to represent the lamination stack, coils, magnets, and steel plate supporting the magnets. Air will be modeled around the motor as well as in the air gap. Then, materials properties will be entered for all components: magnets, electrical steel, steel, coils, and air. A mesh will be then created using H or P elements, and the model solved. Then the current is applied to each coil in the model. 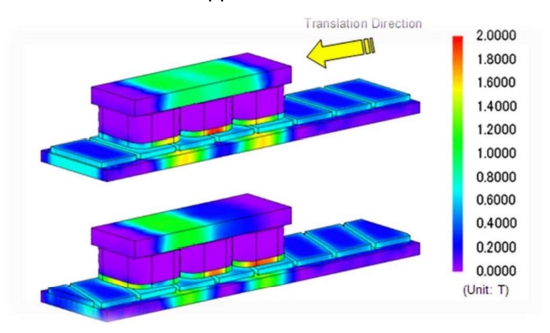 Fig. 6 shows the output of a simulation where flux in tesla is displayed. The main output value of interest for the simulation is, of course, motor force. Because the end turns of the coils do not produce any force, it is also possible to run a 2D simulation by using a 2D model (DXF or other format) of the motor including laminations, magnets, and steel plate supporting the magnets. The output of such a 2D simulation will be very close to the 3D simulation and accurate enough to assess motor force.

A linear induction motor will be modeled the same way, either via a 3D or 2D model, but the solving will be more complicated than for a PMLSM. This is because the magnetic flux of the PMLSM secondary will be modeled instantly after entering the magnet's properties, therefore only one solve will be required to obtain all output values including motor force. However, the secondary flux of the induction motor will require a transient analysis (meaning several solves at a given time interval) so that the magnetic flux of the LIM secondary can be built -- and only then the force can be obtained. The software used for the Electromagnetic Finite Element Simulation will need to have the ability to run a transient analysis.

1.2.1 Linear Motor Stage
HIWIN Corporation supplies linear motors at the component level. In this case, only the linear motor and the secondary modules will be delivered. For a PMLSM motor, the secondary modules will consist of steel plates of different lengths on top of which permanent magnets will be assembled. HIWIN Corporation also supplies complete stages as shown in Fig. 7. 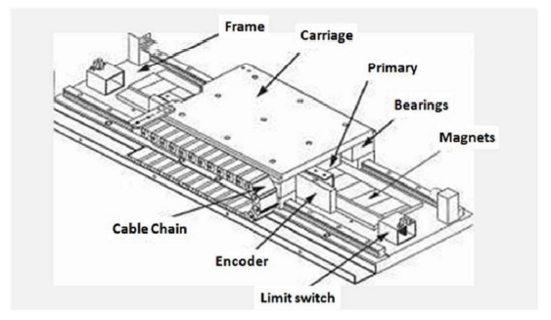 Such a stage includes a frame, linear bearings, the motor primary, the secondary magnets, a carriage for the customer to attach his payload, the encoder, and a cable track. A linear motor stage will be ready to start upon delivery and make life easier, because the customer will not need to design and manufacture a stage, which requires expert knowledge. 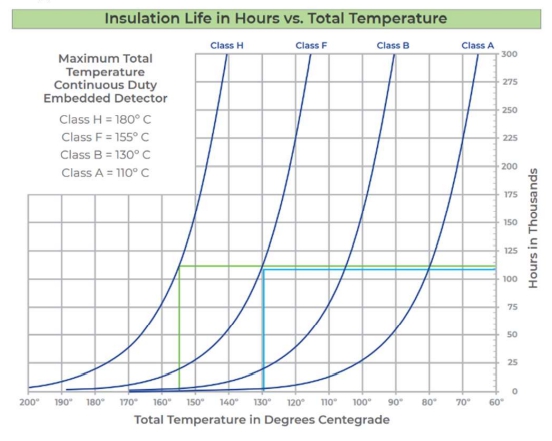 Therefore, it is foreseen that a linear motor stage will have a service life of 50+ years if the motor is selected conservatively, a service life that can never be achieved by belt, ball screw, or rack and pinion driven stages.

For example, EMALS (Electromagnetic Launch Systems) used on aircraft carriers to launch aircrafts are using linear induction motors. The first such linear motor system was installed on the USS Gerald R. Ford aircraft carrier. The motor can accelerate a 45,000-kg aircraft at 240 km/h on a 91-meter track.

Another example is amusement park rides. The linear induction motors installed on some of these systems can accelerate very high payloads from 0 to 100 km/h in 3 seconds. 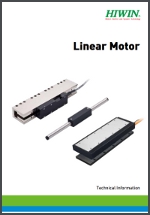 Download the in-depth Technical Specifications guide (PDF) for HIWIN linear motor offerings by clicking on the image above.

2.1.2 Permanent Magnet Synchronous Motors (PMLSM)
PMLSMs will typically be used on applications with much smaller strokes, lower speeds, but high to very high accuracy and intensive duty cycles. Most of these applications are found in the AOI (Automated Optical Inspection), semiconductor, and laser machine industries.

Conclusion
The selection of linear motor driven stages (direct drive) offers significant performance benefits over indirect drives (stages where linear motion is obtained by converting rotary motion) for long-lasting designs and are suitable for many industries.

Learn about HIWIN's full offering of linear motors at hiwin.us/products/linear-motors/.