The new 830-hp Ferrari 296 Gran Turismo Spider (GTS) is an updated classic that exudes power and fun. From its new-design retractable hardtop to its special turbo-charged V6 coupled with a rear-drive electric motor, it's a license to thrill for Prancing Horse fans. There is a real "good-time" vibe about this car, rather than just being racy or desperate to impress.

The mid-rear-engined two-seater sports the Ferrari V6 hybrid powertrain that debuted in the 296 GTB. It uses the new 663-hp 120-deg V6, coupled with a 122-kW dual-rotor single-stator axial flux electric motor capable of delivering 167 hp more. Overall, it sets a power output record for a series-production road-going spider. This is the first-ever Ferrari spider with a rear-wheel drive-only plug-in hybrid (PHEV). This system helps cut pedal response times to zero and delivers a 25-km (15.5-mile) range in all-electric eDrive mode. It sports an 8-speed DCT. Max torque is 740 Nm at 6,250 rpm. Max speed is 205 mph. It will do 0 to 62 in 2.9 sec.

The engine architecture was perfected for both ideal combustion and component integration: both the intake plenums and the engine supports are integrated on the intake sides of the cylinder heads. The engine is therefore lighter and more compact because of the elimination of the plenums and additional supports, while the internal fluid dynamics benefit from the reduction in volume, boosting intake efficiency. The 120-deg vee architecture, which offers more space between the cylinder banks than a 90-deg vee, allowed for the turbos to be installed centrally, thus significantly reducing the unit's overall size and the distance the air has to cover to arrive in the combustion chamber, maximizing the fluid dynamics and efficiency of the intake and exhaust line ducts. 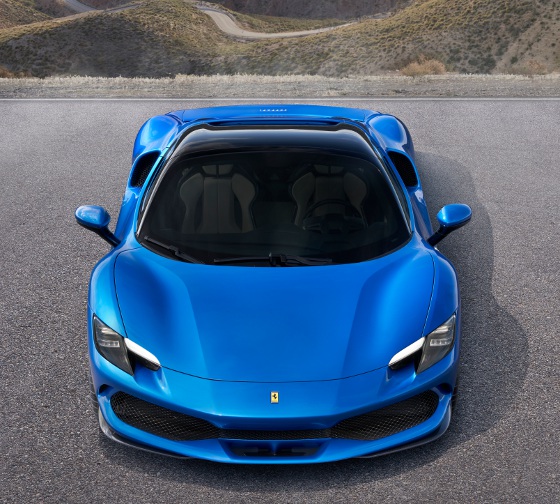 To obtain its specific power output, the pressure in the combustion chamber had to be pushed to new heights. Boosting the pressure in the chamber demanded exceptional development from both a thermal-fluid-dynamic and structural point of view without compromising on engine weight and reliability. To that end, Ferrari poured all of its significant expertise in alloys, dimensioning, and components into engineering the aluminum engine block and cylinder heads. Both components were designed specifically for the V6 architecture.

The engine benefited from the latest Ferrari combustion chamber developments: central injector and spark plugs with a 350-bar pressure injection system improve the fuel-air mix in the chamber and performance, while reducing emissions. The intake and exhaust ducts were redesigned and tuned to maximize volumetric efficiency and thus guarantee high levels of turbulence in the chamber. 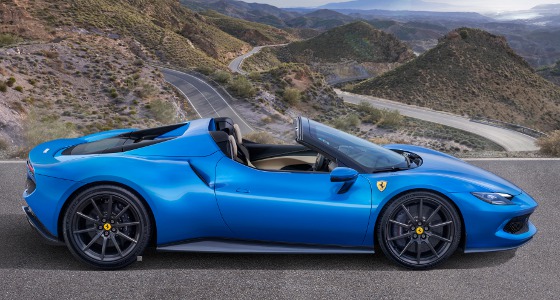 In Ferrari engines, the intake plenum is normally located in the center of the vee. However, the V6 hails a paradigm shift in that regard: Its plenums are on the side of the cylinder heads and are integrated with the support for the throttle valve. The light thermoplastic material used to make them keeps engine weight down. This solution boosts performance because of the shorter ducts and consequent fluid-dynamic detuning, in addition to reducing time-to-boost as a result of the high-pressure line's smaller volume. This architecture also led to the development of a more linear exhaust line located in the upper part of the engine compartment. The shape of the exhaust reduces back pressure and contributes to boosting performance. 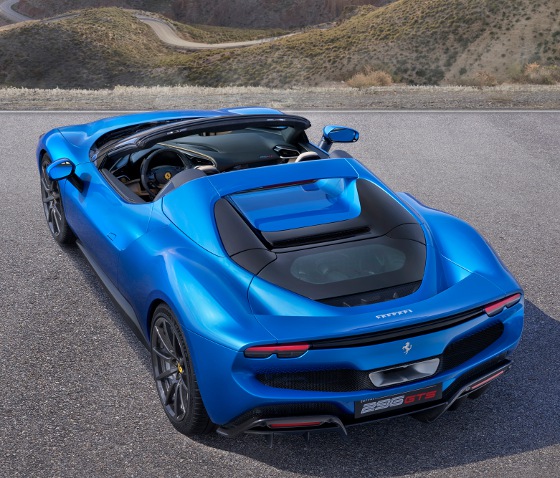 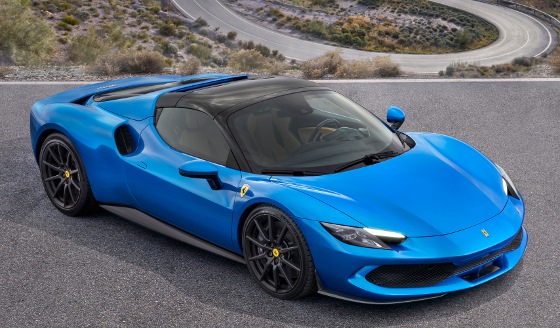 With the introduction of the V6, the IHI turbochargers have been completely redesigned using higher-performance alloys. This meant the maximum revs of the turbos could be increased to 180,000 rpm, with a consequent improvement in performance and boost efficiency, which increases by 24%. The symmetrical, counter-rotating turbos are of the mono-scroll type: the technical solutions adopted have reduced the compressor wheel diameter by 5% and the turbo rotor by 11% compared to the V8 applications, despite the very high specific power. The reduction in the rotating masses (the inertia of the two rotating elements has been reduced by 11% compared to the 3.9l V8 solution) has reduced the spool-up time, ensuring instantaneous power delivery. 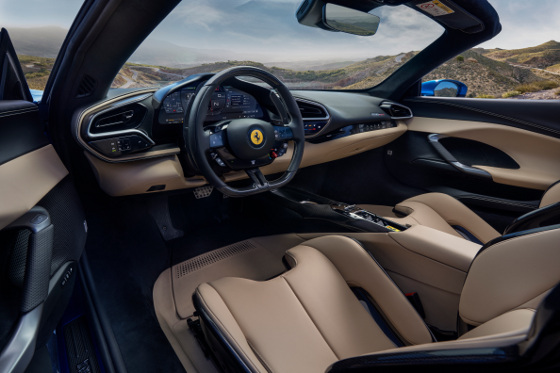 In terms of sound, this V6 earned itself the nickname "piccolo V12" (little V12) during its development phase.

The car's compact dimensions and the introduction of innovative dynamic control systems as well as meticulously honed aero ensure that the driver will instantly be impressed by its agility and responsiveness to commands. Its sporty, sinuous design and extremely compact dimensions also visually underscore its unique and modern forms, while skillfully referencing the likes of the 1963 250 LM, the perfect marriage of simplicity and functionality. 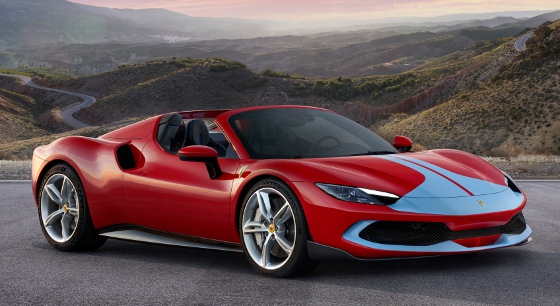 With the roof stowed, it features a sleek, sporty design. With the roof up, the silhouette remains very similar to that of the 296 GTB. The lightweight retractable hard top takes 14 sec to retract or deploy at speeds of up to 45 km/h (28 mph). The separation line between the car's body and the roof is above the B post. As a result, the folding roof splits into two sections that fold flush over the front of the engine, thus maintaining the engine bay's thermal dissipation characteristics and the balance of the overall design. This also allowed the designers to introduce a window in the rear section of the engine cover through which the new V6 is clearly visible. When the top is retracted, the cabin and the rear deck are separated by a height-adjustable glass rear screen that guarantees optimal passenger comfort even at high speeds.

As was the case with the SF90 Stradale, for clients who want to exploit the car's extreme power and performance to the utmost, particularly on the track, the 296 GTS is also available with the Assetto Fiorano package, which includes lightweight features and aero modifications. These include special GT racing-derived adjustable Multimatic shock absorbers optimized for track use; high-downforce carbon-fiber appendages on the front bumper that can deliver an additional 10 kg of downforce, and more extensive use of lightweight materials such as carbon fiber for both cabin and exterior. The Assetto Fiorano package involves much more than simply replacing elements. Some components required that the standard basic structure be redesigned, including the door panel, resulting in an overall weight savings of 8 kg (17.6 lb). The package also includes Michelin Pilot Sport Cup2R high-performance tires, which are especially suited to track use because of their grip. 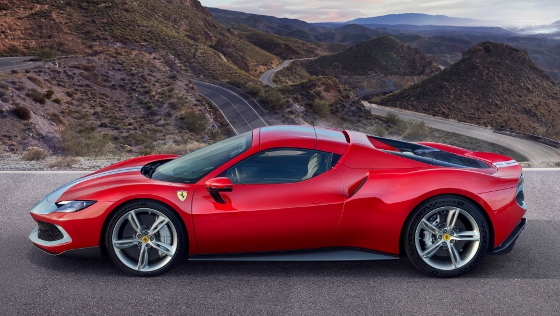 The brake cooling system was developed around the Aero calipers that debuted on the SF90 Stradale with ventilation ducts integrated into their castings. This brake cooling concept requires a dedicated duct to correctly channel cool air coming in through the air intakes on the front bumper through the wheel arch. In the case of the 296 GTS, the intake has been integrated into the headlight design. Just below the DRL, on the inner section, an aperture connects the wing to the wheel arch via a duct running parallel to the chassis strut.

The aerodynamic development of the rear of the 296 GTS centered around managing the rear deck wake solution, which has been optimized to work despite the constraints imposed by the installation of the retractable roof. The wing profile and flying buttresses guarantee the same aerodynamic and thermal efficiency as the 296 GTB. The spider version maintains the active aero device to generate downforce, a new concept for mid-rear-engine Ferrari berlinettas. 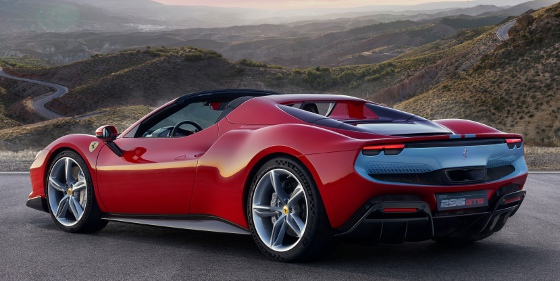 This active rear spoiler generates extra downforce and maximizes the car's handling and braking performance at high speeds. The active aero concept is actually the exact opposite of the one introduced on the Ferrari's berlinettas from the 458 Speciale onward. In previous applications, flaps on the diffuser allowed a transition from a high-downforce (HD) configuration to a low-drag (LD) one that allowed maximum speed to be reached on the straight. However, on the 296 GTS, when the active aero device is deployed it increases downforce. The spoiler is seamlessly integrated into the bumper design, taking up almost all of the space between the taillights. When maximum downforce is not required, the spoiler is stowed in a compartment in the upper section of the tail. 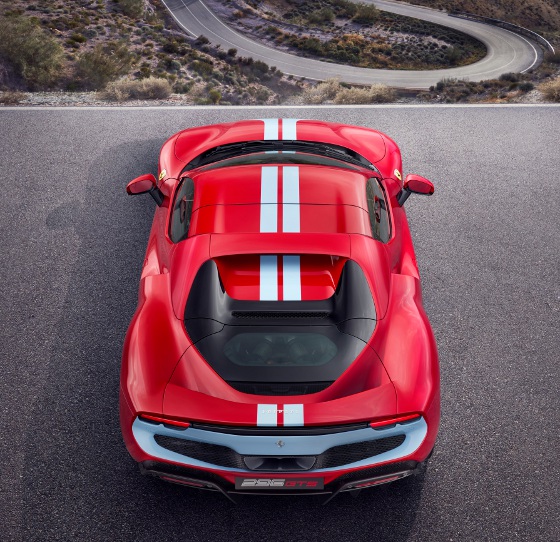 The 296 GTS's cockpit was developed around the new concept of an entirely digital interface. When the engine is off, the onboard instruments go black. With the SF90 Stradale, the Ferrari designers wanted to highlight the presence of the advanced technology and underscore a clear break with the past. In the case of the 296 GTS, the idea was to clothe that technology to sophisticated effect. The result is pure, minimalistic, and elegant. 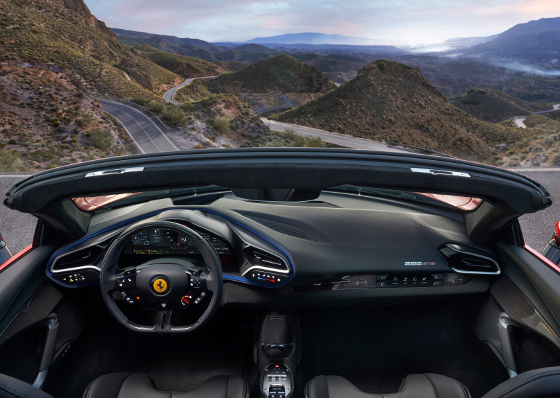 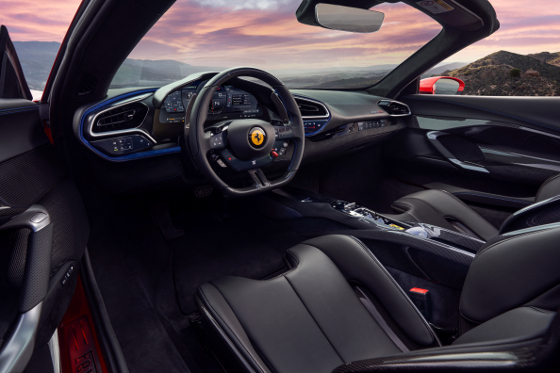 Exclusive Italian leather on the seats and trim is further enhanced by the technical materials used on the functional components. Aerodynamic flaps have been integrated into the rear trim structure to reduce buffeting and increase comfort in open-top driving.

Ferrari did not release pricing for the 296 GTS. Given that the base price for the GTB is $322,986, interested parties should expect to pay a significant premium for this open-top model, say around $400,000+ for the base.