Additive manufacturing: To the Moon and beyond

Aerojet Rocketdyne uses metal 3D-printing technology from Velo3D to make a critical flight component lighter, smaller, and much less expensive than its predecessors.

On the afternoon of December 19, 1972, Apollo 17's command and service module CSM-114 "America" splashed down in the Pacific Ocean, bringing its crew and cargo safely home. The event marked the end of NASA's 11-year lunar program and humankind's final visit to the Moon. Thanks in part to Los Angeles, CA-based Aerojet Rocketdyne -- a manufacturer with a proud heritage in spaceflight and rocket propulsion -- we'll be going back soon, this time to stay.

Meet Apollo's sister
In Greek mythology, Apollo was one of the 12 Olympians -- gods of the sea, sun, and sky. It's therefore only fitting that NASA has named its next lunar expedition after the deity's twin sister and goddess of the Moon, Artemis. While those many Apollo missions were hugely successful and crucial to the continuation of the United States space program, Artemis' goals are much more ambitious. 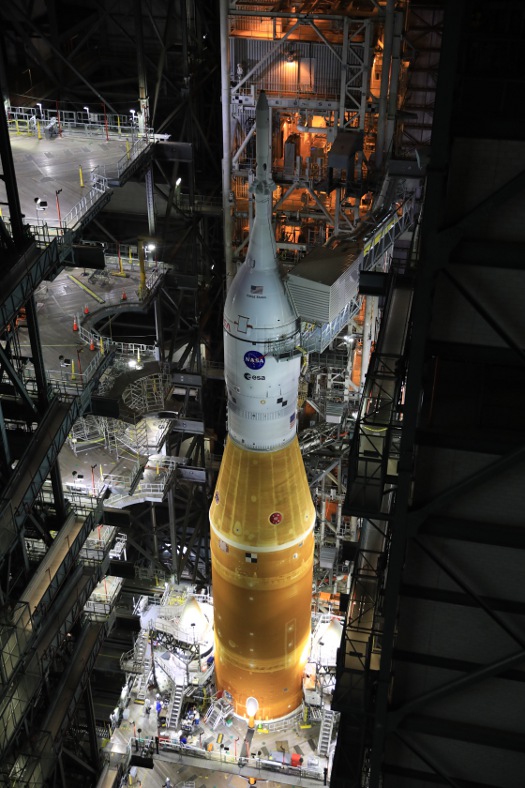 Inside the Vehicle Assembly Building at NASA's Kennedy Space Center in Florida, work platforms are being retracted from around the Artemis I Space Launch System rocket and Orion spacecraft atop it in preparation to roll out for testing. [Credit: NASA]

Beginning this year, NASA will place unmanned Orion spacecraft into lunar orbit, followed by crewed landings, construction of lunar habitats and supporting infrastructure, and, ultimately, preparation for a visit to Mars. According to NASA administrator Jim Bridenstine, the space agency and its partners will accomplish this by the end of this decade and do so with half the buying power it had back in 1964, when Apollo development was at its peak.

One of the technologies that enables such ambitious plans? Additive manufacturing (AM), better known as 3D printing. "As with any complex endeavor, the more affordable you can make it, the greater the chance that you will ensure its completion, and the moon is no different," said James Horton, aerospace engineer and mission architect at Aerojet Rocketdyne. "Metal AM plays a key role in achieving these goals."

Building on a legacy
Aerojet Rocketdyne has a long history in metal AM. For more than two decades, the company has invested extensive time and resources into leveraging this important technology, focusing most of its energies on laser powder bed fusion (LPBF). It's due to these efforts that the aerospace manufacturer has been able to design and integrate 3D-printed end-use components successfully for a variety of projects, among them the massive RS-25 engines that will carry the Artemis mission into space.

Horton has been there for much of it. Since 2008, he's held lead roles in rocket engine design, development, and test flight operations for NASA and the Department of Defense (DOD). His advanced propulsion team at Aerojet Rocketdyne is currently working on chemical, electric, and nuclear propulsion to support NASA's deep space exploration efforts, the Artemis project included.

He'll tell you that metal AM, when used in conjunction with advanced design and simulation software, gives today's aerospace engineers "an entire buffet of solutions that were completely unavailable to their predecessors, providing the unparalleled ability to innovate without compromise." Because of this, Aerojet Rocketdyne has been able to drive down propulsion costs, speed up time to market, and improve the performance of its products like never before.

Case in point
One recent example is a critical subsystem Apollo engineers knew as a "quad" reaction control system (RCS). The Apollo RCS included four individual R-4D bipropellant thrusters, originally designed by Marquardt Corp., that used hypergolic (spontaneously igniting) nitrogen tetroxide and hydrazine as propellants. Every lunar lander and service module had four quads, each of which generated more than 100 lb of thrust to control the spacecraft's roll, pitch, and yaw during flight. Following a series of acquisitions, Aerojet Rocketdyne eventually took ownership of the R4-D, intending to use what is now called the "reaction control system" (RCS) on the future spacecraft.

Even the first 3D-printed version of the revamped R-4D reaction control system was a huge improvement over its predecessor. AM technology from Velo3D made it even better.

Given that the original RCS design is more than 60 years old, Horton and his team recognized an improvement opportunity and began what would become one of the many internal research and development (IRAD) projects intended to optimize the systems required for the Artemis program and other commercial lunar projects. In the case of the RCS, they looked for ways to reduce the number of engine parts, increase its reliability, and make assembly and serviceability easier, all of which would decrease project costs while enhancing spacecraft performance. Metal AM checked all these boxes. 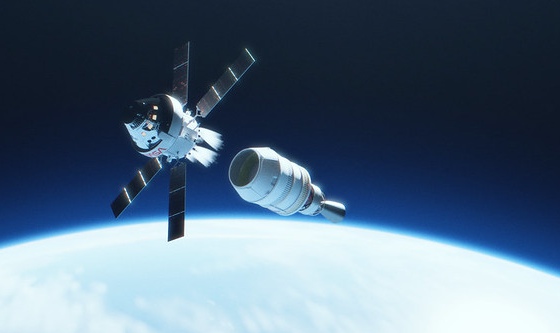 "During the entire Apollo program, NASA produced more than 650 thrusters to support six Moon landings," said Horton. "It was a huge number, which led us to believe we were onto something big -- we knew that, if we could bring affordability to the RCS, we could make a positive impact on this and future programs."

They also wanted to take advantage of rocket fuel advancements. As Horton explained, propulsion engineers had learned over the years that adding 25% nitric oxide to the fuel oxidizer mentioned previously (nitrogen tetroxide) would reduce its freezing point from -9 C (16 F) to -55 C (-67 F). Since this reduces the mass and power consumption of the heating systems needed to prevent frozen fuel lines in space, it presented Aerojet Rocketdyne with a significant opportunity. There was just one problem: the MON-25 fuel just described is unstable, a condition that Horton suggested is a "bad thing to have in rocketry."

Proving the concept
Here again, metal AM was the answer, as it allowed the team to print special injector geometries that could burn the fuel in a stable manner. They soon designed and built a concept model from the nickel-based superalloy Inconel 718, but unfortunately, ran into limitations with their metal 3D printer.

"We had to build the RCS injector body at a 45-degree angle, due to overhang concerns, and also add in a series of large support structures to prevent thermal warping during the build process," Horton said. "The supports would need to be machined away afterward, adding cost to the product, while the orientation angle created less-than-desirable surface quality. There was definitely room for improvement."

At the same time, they realized there was room for substantial lightweighting and topology optimization. Horton noted that they'd eliminated "large chunks" of unnecessary material during the redesign, but it was far from perfect. "Every single pound of material you can remove from a spacecraft saves money on launch costs," he said. "That's why we turned to nTopology for help with optimizing the design, and then Velo3D to build it for us."

Shell, fill, and print again
Technicians from New York-based engineering and design software company nTopology were quickly able to "shell out" the injector body's blocky structure, leaving consistent wall thicknesses around the complex fluid ports and channels while eliminating stress concentration areas. They then filled the resultant void with a thin lattice structure, increasing its strength and stiffness while adding only minimal weight; because of its "implicit modeling" capabilities, nTopology was able to cut the quad injector's mass in half. 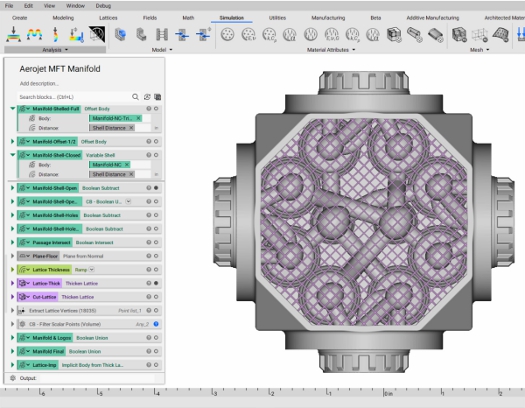 The Aerojet Rocketdyne team sent the optimized part file to Velo3D's facility in Campbell, CA. It was there that the metal AM solution provider gave Horton some good news. Due to the company's mastery of 3D-printed titanium -- a metal favored throughout the aerospace industry for its strength and light weight -- the RCS injector body would weigh much less than its Inconel counterpart. As Velo3D technical sales engineer Gene Miller noted, there'd also be no need to build it at an angle or use the big, blocky supports as in the first iteration.

"Our proprietary, pre-print software is intuitive enough to recognize different geometric features and apply specific laser parameters to those areas so that they print as efficiently as possible and without the need for added support material," Miller said. "In addition, we're one of the few metal AM system providers that can successfully print large, complex titanium parts without cracking. We have a unique solution to mitigate accumulated internal stress within the printed material, and can avoid cracking more so than other printers on the market." 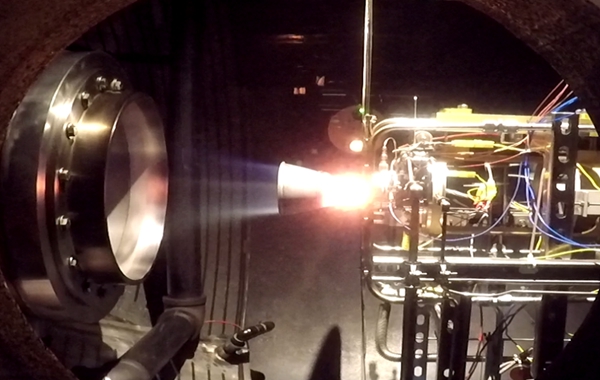 The titanium thruster shown here was 3D printed on Velo3D's Sapphire system. It is lighter, smaller, and more cost effective to build than any other solution developed thus far.

The final result? Aerojet Rocketdyne now has an RCS thruster that is 1/5 the mass, 1/2 the size, and 1/3 the cost of a conventionally manufactured version. Since it contains far fewer components, it's also easier to assemble, with much less chance of failure during operation. The company is responsible for producing 12 monopropellant RCS thrusters, with each having 160 lb of thrust. Aerojet Rocketdyne says these components "are the sole means of controlling the crew module's orientation during atmospheric reentry and altering its course in preparation for splashdown."

Said Horton, "We've shown that by leveraging additive manufacturing and advanced software technology, we're able to interject affordability, reduce lead times, and greatly improve upon system performance compared to the way we built parts in the past." 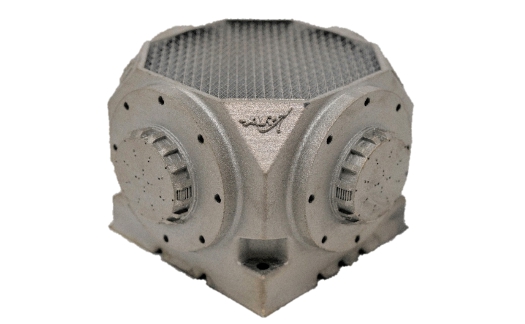 Learn all that Velo3D has to offer at velo3d.com/.

If you have extra time and are interested in more specifics about metal AM, we highly suggest watching the following:

VIDEO: VELOVirtual: The innovator's guide to metal AM.