12 principles of modern military leadership: Part 1 How much do they apply to what you do? 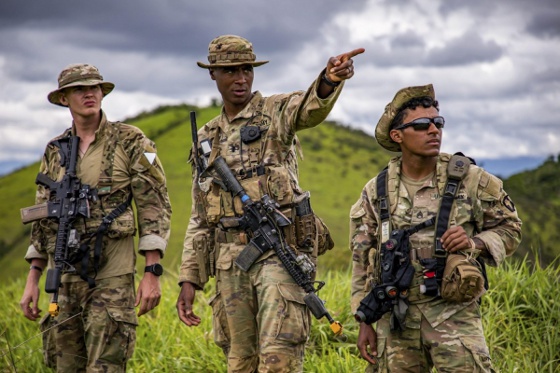 1. LEAD FROM THE FRONT
Taught to lead by example, leaders inspire their Soldiers to perform deeds of heroism and sacrifice, which often requires suppression of natural feelings such as fear. Leaders do not encourage their Soldiers by saying, "onward," but rather, "follow me," the very apropos motto of the U.S. Army Infantry School.

To inspire troops, leaders must instill a pervasive attitude to motivate their troops to advance under withering fire or hold a seemingly untenable position. To accomplish this, leaders must be present at the forward edge of the battle area so their Soldiers will follow their example and respect their judgment, leadership ability, and tactical knowledge.

2. HAVE SELF-CONFIDENCE, NOT EGOISM
"As I gain in experience, I do not think more of myself but less of others." -- Gen. George S. Patton Jr.

While a platoon of Soldiers is wary of going into action with an inexperienced leader, a smart platoon leader can mitigate this problem by seeking instruction and mentorship from the platoon sergeant, a role that noncommissioned officers have embraced since the rise of professional armies.

Any leader worth his stuff has confidence, but excessive egotism is usually indicative of a lack of assurance. A show of bravado in advance of a mission or the face of the enemy is acceptable; however, an abundance of cockiness is liable to portend a horrible day for all concerned. Below are examples of egotism that not only affected the leaders but their troops as well.

Gen. George S. Patton knew a thing or two about projecting confidence. He could change at will and put on his "war face," followed by a speech, filled with "blood and guts," to motivate his men.

Patton believed he was the most distinguished Soldier who ever lived. He convinced himself that he would never falter through doubt. This faith in himself encouraged his men of the Second American Corps in Africa, and the Third Army in France, to believe they could achieve ultimate victory under his leadership.

3. MORAL COURAGE
"It is curious that physical courage should be so common in the world and moral courage so rare." -- Mark Twain

Doing the right thing, regardless of the consequences, is moral courage. An outstanding example is Gen. George Washington, whose legacy as the commander of the Continental Army and the first President of the United States remains among the greatest in American history.

Washington was one of the most experienced military leaders in the 13 colonies, having served with the English during the French and Indian War in 1755.

Selected as a delegate to the Continental Congress, he was selected as Commander-in-Chief of the Continental Army in 1775. Although Washington lost most of the battles during the Revolutionary War, he kept the Army together and built a strong coalition with the French when they intervened in the war.

According to historian Gordon Wood, Washington's most significant act was his resignation as commander of the armies -- an act that stunned aristocratic Europe. Many believed Washington could have been a dictator if he had chosen so.

4. PHYSICAL COURAGE
"There were all kinds of things I was afraid of at first, ranging from grizzly bears to 'mean' horses and gun-fighters; but by acting as if I was not afraid, I gradually ceased to be afraid." -- President Theodore Roosevelt

Because the life of a Soldier is fraught with danger, courage is a requirement for every military leader. Soldiers, who do their duty regardless of fear and risk to life or limb, perform bravery on the battlefield. As a result, there are numerous examples of the American Soldiers' courage.

For instance, during World War II, 2nd Lt. Audie L. Murphy became (at the time) the most decorated Soldier in American history. Ironically, he had been turned down for enlistment by the Marines, Navy, and Army paratroopers because of his physique.

On January 26, 1945, at Holtzwihr, Germany, Murphy ordered his men to withdraw from an attack of enemy tanks and infantry. During the withdrawal, he mounted a burning tank destroyer and fired its .50-caliber machine gun for more than an hour, killing 50 Germans, stalling the attack, and forcing the enemy to withdraw. Although wounded, he led his men in a counterattack and was awarded the Medal of Honor for his actions. 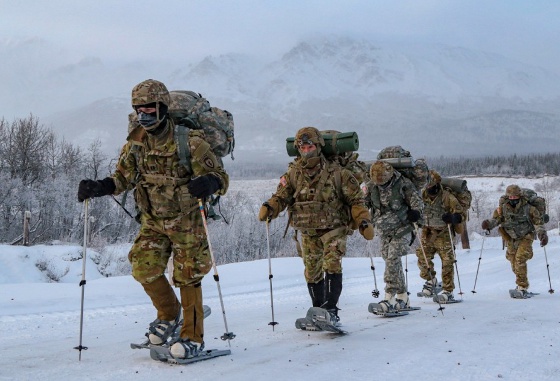 Senior leaders from U.S. Army Alaska train on snowshoes for the first time at Black Rapids Training Site Nov. 17, 2021, as a part of their Cold Weather Orientation Course. This "Train the Trainer" experience teaches senior leaders, who then go back to their units and train Soldiers in how to survive in the Arctic environment. [U.S. Army photo by Staff Sgt. Christopher Dennis]

5. FOSTER TEAMWORK
"It's amazing what you can accomplish if you do not care who gets the credit." -- President Harry S. Truman

When accomplishing the mission, teamwork is more important than personal recognition, thus the famous quote, "There is no 'I' in team." Today's military often functions in joint operations, which consist of other branches as well as coalition partners. Therefore, an experienced leader cannot favor individuals but must foster cooperation with all team members.

An excellent example of such leadership is General Dwight D. Eisenhower, Supreme Allied Commander, who despite the challenges of making multiple countries' militaries work together during World War II, built a coalition of U.S., British, French, and Canadian forces.

"I could never face a body of officers without emphasizing one word -- teamwork," he said.

6. HAVE FITNESS AND ENERGY
"Utterly fearless, full of drive and energy, he was always up front where the battle was fiercest. If his opponent made a mistake, Rommel was on it like a flash." -- Lt. Gen. Sir Brian Horrocks

If leaders follow the principle of leading from the front, then they must be physically fit and energetic to meet the demands of leadership on the battlefield. Leaders who possess such endurance can lead a platoon of hard chargers to fix bayonets and take the high ground.

Former Olympic athlete Gen. George S. Patton advocated for fitness long before it became a standard requirement for the modern-day Soldier. Assuming command of the I Armored Corps on January 15, 1942, Patton laid out his expectations.

"As officers, we must give leadership in becoming tough, physically and mentally," he said. "Every man in this command must be able to run a mile in 15 minutes with a full military pack."

When an overweight senior officer guffawed, Patton angrily resumed, "I mean every man. Every officer and enlisted man, staff, and command. Every man will run a mile! We will start in exactly 30 minutes! I will lead!"

CONCLUSION
As role models, leaders must lead from the front and display courage to motivate their Soldiers. However, it is important to maintain an acceptable level of confidence without it turning into excessive egotism. It is crucial to remember there is no "I" in team, and even the most well-known leaders, such as Eisenhower, needed to foster teamwork and unit cohesion to accomplish goals that would have been impossible to achieve otherwise.