Compression limiters are used to protect plastic components in bolted joints and maintain a threaded fastener's clamp load by eliminating plastic creep. To function properly, the bearing surface beneath the bolt's head must extend over the compression limiter to contact the plastic component. If this bearing surface is too small, the host component may not be retained by the bolt resulting in a poor joint. 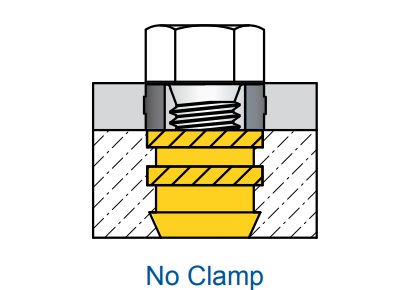 There are several methods to ensure sufficient bearing surface under the bolt's head. These include the use of a flanged bolt, washer, or headed compression limiter.

The individual component cost, ease or complexity of assembly, and overall cost of each configuration influence which method is best suited for each application.

How much plastic should be compressed?
Ideally, compression limiter length is equal to or slightly less than the host thickness. The amount of material compressed under the bolt's head varies depending on the application's loading and plastic properties. This area of compression must be large enough to withstand forces attempting to pull the assembly apart, yet small enough to allow sufficient plastic compression so that the compression limiter contacts both the bolt and the mating component.

Assembly considerations
Several factors including speed and assembly method must be considered when determining the most cost-effective solution for a specific application.

Assembly with a flanged bolt was the fastest, followed by that with a headed compression limiter, which must be oriented. As expected, the addition of a third component (the washer) significantly slowed the assembly process -- requiring twice the assembly time.

Design intangibles
Use of a headed compression limiter or flanged bolt in serviceable assemblies may be preferable, as there would be no washer that could be accidentally omitted during reassembly. These are also preferable in applications where there are multiple assembly locations and/or poor quality control.

Individual component costs
Generally, fasteners are the least expensive components in an assembly. The following chart shows representative pricing for each component combination previously discussed based on an annual usage of 1 million assemblies incorporating an M6 joint. 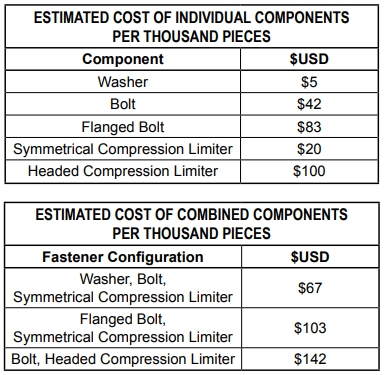 Relative cost differences between bolts and compression limiters vary depending on component supplier and bolt characteristics. Of these three potential combinations, the method with a washer, bolt, and non-headed compression limiter provides the lowest component cost for controlling bearing surface. However, as previously stated, the cost of the fastening components is often the least significant compared to the overall cost of the assembly. 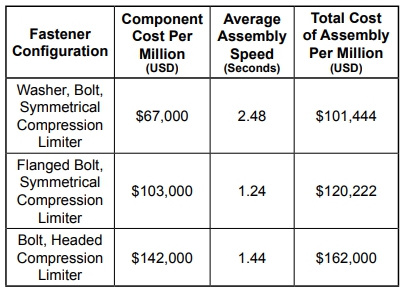 (NOTE: Not captured in this analysis are the administrative costs associated with ordering, handling, and maintaining inventory of components as well as their suppliers. The addition of a third component may increase these costs. Additionally, if the assembly process is automated, the technology required to feed and orient a washer will also increase overall cost. Regardless, a flanged bolt or washer can replace a headed compression limiter in most applications to increase assembly efficiency and lower the overall cost of the assembly.)

Conclusion
The best method to ensure adequate bearing surface on the plastic in a bolted assembly depends on an application's requirements and limitations. A washer may be preferred in lower volume and/or non-serviced applications. In higher volume, automated, and/or serviceable applications, a non-headed compression limiter with a flanged bolt is the easiest to assemble and provides the lowest total cost. Both configurations with a washer or flanged bolt will provide a lower cost solution than using a headed compression limiter.

Although this article offers general design guidelines, it is recommended that application engineers who specialize in fastening and joining be consulted to ensure a properly configured joint is employed for each application.

Get the SPIROL compression limiter Design Guide (PDF, no registration) here. This document has much more technical information.