Solar Power: More light captured without sun tracking -- even on a cloudy day 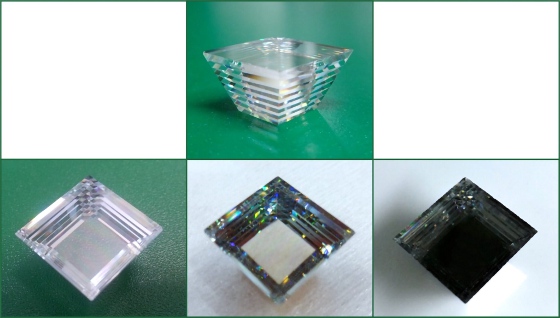 Different stages of the graded index glass pyramid fabrication: when in optical contact with a solar cell, the pyramid at the final step (bottom right corner) absorbs and concentrates most of the incident light and appears dark. [Image credit: Nina Vaidya]

Even with the impressive and continuous advances in solar technologies, the question remains: How can we efficiently collect energy from sunlight coming from varying angles from sunrise to sunset?

Solar panels work best when sunlight hits them directly. To capture as much energy as possible, many solar arrays actively rotate toward the sun as it moves across the sky. This makes them more efficient, but also more expensive and complicated to build and maintain than a stationary system.

These active systems may not be necessary in the future. At Stanford University, engineering researcher Nina Vaidya designed an elegant device that can efficiently gather and concentrate light that falls on it, regardless of the angle and frequency of that light. A paper describing the system's performance, and the theory behind it, is the cover story in the July issue of Microsystems & Nanoengineering, authored by Vaidya and her doctoral advisor Olav Solgaard, professor of electrical engineering at Stanford.

"It's a completely passive system -- it doesn't need energy to track the source or have any moving parts," said Vaidya, who is now an assistant professor at the University of Southampton, UK. "Without optical focus that moves positions or [the] need for tracking systems, concentrating light becomes much simpler."

The device, which the researchers are calling AGILE -- an acronym for Axially Graded Index Lens -- is deceptively straightforward. It looks like an upside-down pyramid with the point lopped off. Light enters the square, tile-able top from any number of angles and is funneled down to create a brighter spot at the output.

In their prototypes, the researchers were able to capture over 90% of the light that hit the surface and create spots at the output that were three times brighter than the incoming light. Installed in a layer on top of solar cells, they could make solar arrays more efficient and capture not only direct sunlight, but also diffuse light that has been scattered by the Earth's atmosphere, weather, and seasons.

VIDEO: The AGILE array system. Note that the AGILE lens does not have metallic reflective sidewalls in the video, so that the graded index material can be visualized. [Credit: Video by Nina Vaidya and Xuan Wu]

A top layer of AGILE could replace the existing encapsulation that protects solar arrays, remove the need to track the sun, create space for cooling and circuitry to run between the narrowing pyramids of the individual devices, and, most importantly, reduce the amount of solar cell area needed to produce energy -- and hence reduce the costs. Furthermore, the uses aren't limited to terrestrial solar installations: If applied to solar arrays being sent into space, an AGILE layer could both concentrate light without solar tracking and provide necessary protection from radiation.

Envisioning the perfect AGILE
The basic premise behind AGILE is similar to using a magnifying glass to burn spots on leaves on a sunny day. The lens of the magnifying glass focuses the sun's rays into a smaller, brighter point. But with a magnifying glass, the focal point moves as the sun does. Vaidya and Solgaard found a way to create a lens that takes rays from all angles but always concentrates light at the same output position.

"We wanted to create something that takes in light and concentrates it at the same position, even as the source changes direction," said Vaidya. "We don't want to have to keep moving our detector or solar cell or moving the system to face the source."

Vaidya and Solgaard determined that, theoretically, it would be possible to collect and concentrate scattered light using an engineered material that smoothly increased in refractive index -- a property that describes how quickly light travels through a material -- causing the light to bend and curve toward a focal point. At the surface of the material, the light would hardly bend at all. By the time it reached the other side, it would be almost vertical and focused.

"The best solutions are often the simplest of ideas. An ideal AGILE has, at the very front of it, the same refractive index as the air, and it gradually gets higher -- the light bends in a perfectly smooth curve," said Solgaard. "But in a practical situation, you're not going to have that ideal AGILE."

From theory to reality
For the prototypes, the researchers layered together different glasses and polymers that bend light to different degrees, creating what's known as a graded index material. The layers change the light's direction in steps instead of a smooth curve, which the researchers found to be a good approximation of the ideal AGILE. The sides of the prototypes are mirrored, so any light going in the wrong direction is bounced back toward the output.

One of the biggest challenges was finding and creating the right materials, Vaidya says. The material layers in the AGILE prototype let a broad spectrum of light, from near-ultraviolet to infrared, pass through it and bend that light increasingly toward the output with a wide range of refractive indices, which is not seen in nature or the present optics industry. These materials used also had to be compatible with each other -- if one glass expanded in response to heat at a different rate than another, the whole device could crack -- and robust enough to be machined into shape and remain durable. 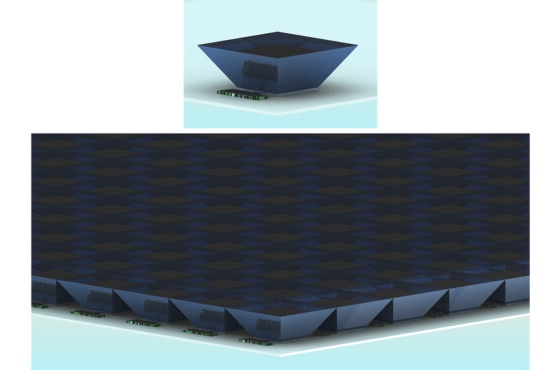 Depictions of the AGILE device in detail and as an array. [Image credit: Nina Vaidya]

"It's one of these 'moonshot' engineering adventures, going right from theory to real prototypes," said Vaidya. "There are a lot of theory papers and great ideas out there, but it's hard to turn them into reality with real designs and real materials pushing the boundaries of what was deemed impossible before."

After exploring many materials, creating new fabrication techniques, and testing multiple prototypes, the researchers landed on AGILE designs that performed well using commercially available polymers and glasses. AGILE has also been fabricated using 3D printing in the authors' prior work that created lightweight and design-flexible polymeric lenses with nanometer-scale surface roughness. Vaidya hopes the AGILE designs will be able to be put to use in the solar industry and other areas as well. AGILE has several potential applications in areas like laser coupling, display technologies, and illumination -- such as solid-state lighting, which is more energy efficient than older methods of lighting.

"Using our efforts and knowledge to make meaningful engineering systems has been my driving force, even when some trials were not working out," said Vaidya. "To be able to use these new materials, these new fabrication techniques, and this new AGILE concept to create better solar concentrators has been very rewarding. Abundant and affordable clean energy is a vital part of addressing the urgent climate and sustainability challenges, and we need to catalyze engineering solutions to make that a reality."