What drives rechargeable battery decay? SLAC Lab says it depends on how many times you've charged it

How quickly a battery electrode decays depends on properties of individual particles in the battery -- at first. Later on, the network of particles matters more.

Rechargeable lithium-ion batteries don't last forever -- after enough cycles of charging and recharging, they'll eventually go kaput, so researchers are constantly looking for ways to squeeze a little more life out of their battery designs.

Now, researchers at the Department of Energy's SLAC National Accelerator Laboratory and colleagues from Purdue University, Virginia Tech, and the European Synchrotron Radiation Facility have discovered that the factors behind battery decay actually change over time. Early on, decay seems to be driven by the properties of individual electrode particles, but after several dozen charging cycles, it's how those particles are put together that matters more. 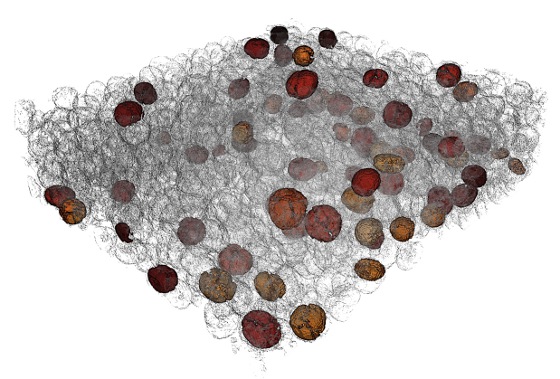 A piece of battery cathode after 10 charging cycles. A machine-learning feature detection and quantification algorithm allowed researchers to automatically single out the most severely damaged particles of interest, which are highlighted in the image. [Image credit: Courtesy Yijin Liu/SLAC National Accelerator Laboratory]

"The fundamental building blocks are these particles that make up the battery electrode, but when you zoom out, these particles interact with each other," said SLAC scientist Yijin Liu, a researcher at the lab's Stanford Synchrotron Radiation Lightsource and a senior author on the new paper. Therefore, "If you want to build a better battery, you need to look at how to put the particles together."

Seeing the forest for the trees
The new study, published April 29, 2022, in Science, builds on past research in which Liu and colleagues used computer vision techniques to study how the individual particles that make up a rechargeable battery electrode break apart over time. The goal this time was to study not just individual particles but the ways they work together to prolong -- or degrade -- battery life.

Keije Zhao, a Purdue mechanical engineering professor who with Liu and Virginia Tech chemistry professor Feng Lin was a senior author, likened the problem to people working in groups. "Battery particles are like people -- we all start out going our own way," Zhao said "But eventually we encounter other people, and we end up in groups, going in the same direction. To understand peak efficiency, we need to study both the individual behavior of particles, and how those particles behave in groups."

To explore that idea, co-first authors Jizhou Li, an SSRL postdoctoral fellow, and Nikhil Sharma, a Purdue graduate student, teamed up with Liu, Lin, and Zhao and other colleagues to study battery cathodes with X-rays. They used X-ray tomography to reconstruct three-dimensional pictures of the cathodes after they had gone through either 10 or 50 charging cycles. They cut up those 3D pictures into a series of 2D slices and used computer vision methods to identify particles.

A battery's life
In the end, they identified more than 2,000 individual particles, for which they calculated not only individual particle features such as size, shape, and surface roughness but also more global traits, such as how often particles came into direct contact with each other and how varied the particles' shapes were.

Next, they looked at how each of those properties contributed to particles' breakdown, and a striking pattern emerged. After 10 charging cycles, the biggest factors were individual particles' properties, including how spherical the particles were and the ratio of particle volume to surface area. After 50 cycles, however, pair and group attributes -- such as how far apart two particles were, how varied their shapes were, and whether more elongated, football-shaped particles were oriented similarly -- drove particle breakdown.

"It's no longer just the particle itself. It's particle-particle interactions" that matter, Liu said. That's important, he said, because it means manufacturers could develop techniques to control such properties. For example, they might be able to use magnetic or electric fields to align elongated particles with each other, which the new results suggest would result in longer battery life.

Co-senior author and Virginia Tech chemist Feng Lin said the results could be applied beyond the particulars of the present research. "This study really sheds light on how we can design and manufacture battery electrodes to obtain long cycle life for batteries," Lin said. "We are excited to implement the understanding to next-generation, low-cost, fast-charging batteries."

The research was funded by the DOE Laboratory Directed Research and Development program at SLAC and by the National Science Foundation. SSRL is a DOE Office of Science user facility.