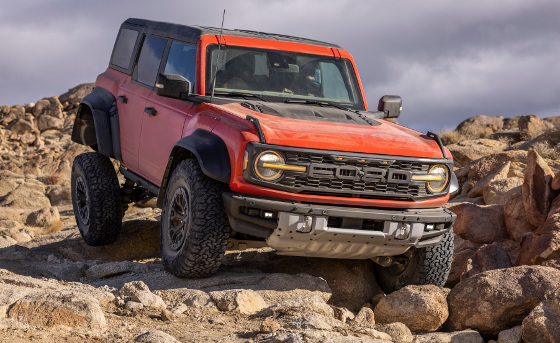 Potential buyers of the wildly popular Ford Bronco have a new high-end option to consider if they want to take it up a notch or 10. The Bronco Raptor provides off-roaders with next-level performance in the form of the world's first Ultra4 Racing-inspired SUV. Ford Performance, the same team that produces the F-150 Raptor, designed and engineered Bronco Raptor specifically for hardcore off-road enthusiasts. 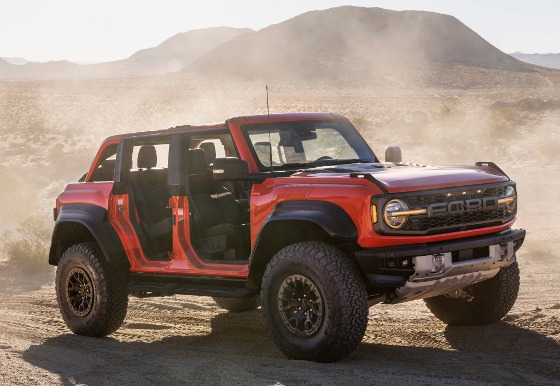 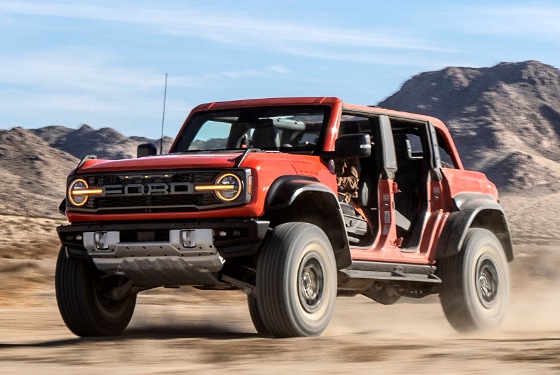 Ultra4 Racing is the epitome of grueling off-road competition, featuring demanding races such as the famed King of the Hammers in the Johnson Valley in California, where Bronco Raptor will be on display on Feb. 3. Ford and Bronco are the official truck and SUV of the Ultra4 series.

To build the world's first Ultra4-inspired SUV, Ford Performance set the bar high. Bronco Raptor had to be even faster and bring more off-road capability, agility, and maneuverability than Bronco already delivers. 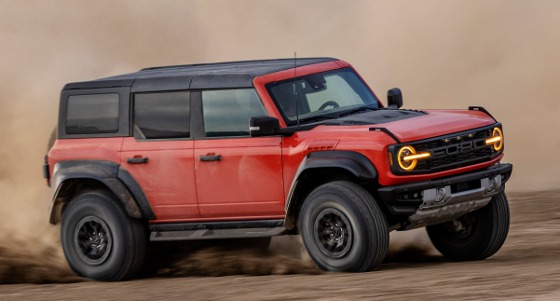 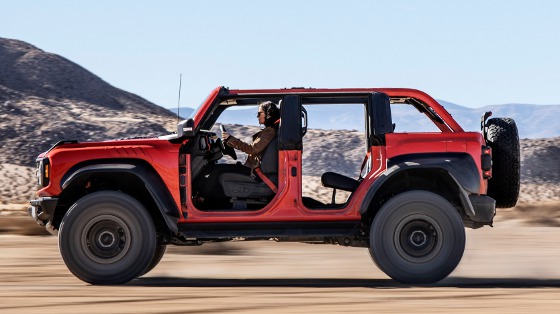 "We had to build the Bronco Raptor -- it's our ultimate vehicle for hardcore off-road enthusiasts who demand something more," said Carl Widmann, Ford Performance chief engineer. "Like the Ultra4 desert race trucks, the 'Raptor of SUVs' conquers desert dunes at highway speeds and is equipped with competition-level off-road technology and hardware."

Starting with the Bronco frame foundation, the Ford Performance team knew it needed a Raptor-specific version for increased suspension travel and track width for handling stability during high-speed desert runs. At the Raptor core is a fully boxed, high-strength steel frame with new shock towers that increase wheel travel and off-road durability. Heavy-duty bash and skid plates provide continuous driveline coverage from the front bumper to the back of the engine, transmission, and transfer case. In the upper body, B-pillar cross-bar and C-pillar reinforcement help deliver a greater than 50% total body-in-prime torsional rigidity increase over a standard Bronco four-door model. 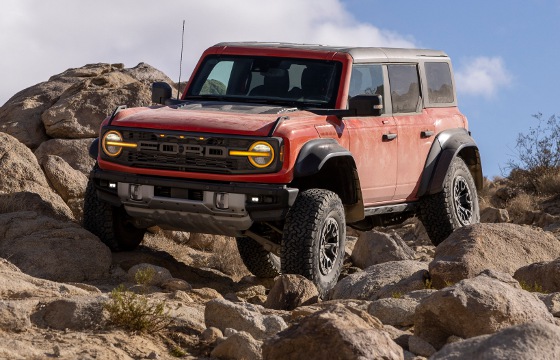 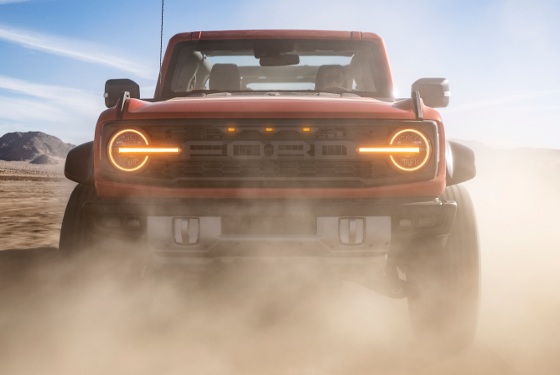 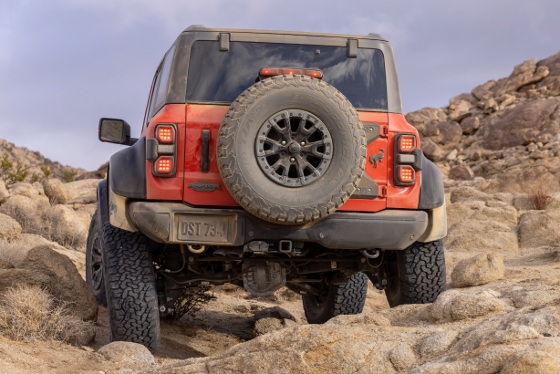 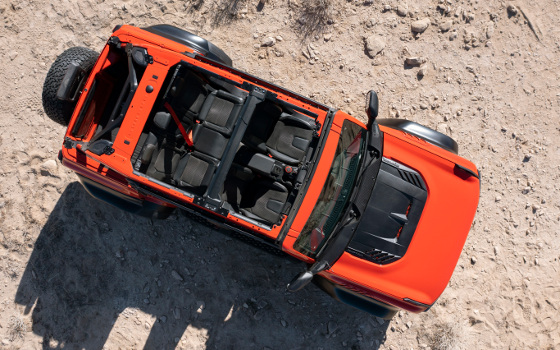 Competition-level, Ford Performance-developed axles, also used on the Bronco DR race truck, further deliver on the Ultra4 inspiration. The solid rear axle is upgraded to a semi-float Dana 50 Heavy-Duty AdvanTEK with 235-mm ring gear, while the Dana 44 AdvanTEK front-drive unit includes upgraded half-shafts with 210-mm ring gear. These upgraded front and rear axles increase the track width by 8.6 in. over a base Bronco (73.6 in. vs. 65 in.) for even more sure-footed confidence. Larger front and rear driveshafts support increased wheel torque. Bronco Raptor also runs with a minimum ground clearance of 13.1 in., 4.8 in. more than a base four-door model.

An advanced 4x4 system with three modes includes a higher-capacity clutch designed to withstand the demands of high-performance desert events. The upgraded transfer case also features a 3.06 4x4 LO ratio for up to 67.7:1 crawl ratio. 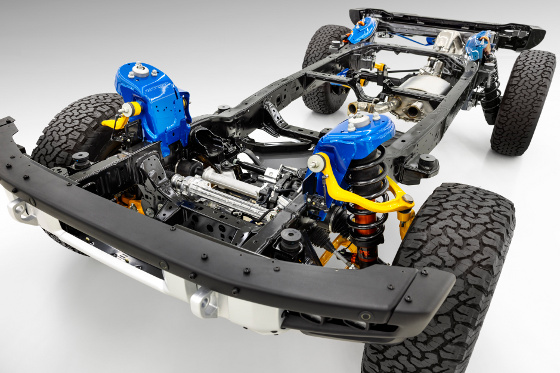 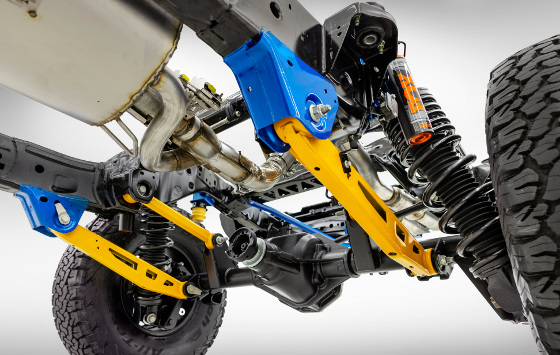 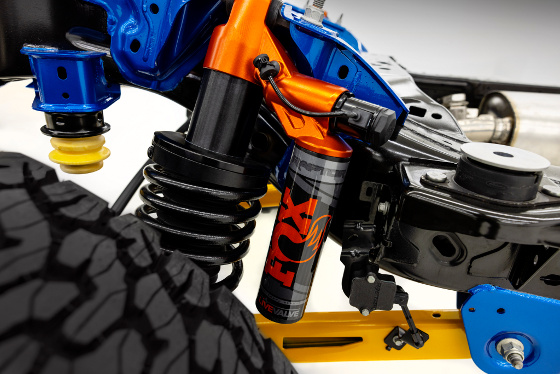 Unique Ford Performance-designed front and rear control arms help deliver maximum wheel travel of 13 in. in front and 14 in. at the rear, or 60% and 40% more, respectively, than a Bronco base model. The vehicle's standard BFGoodrich 37-in. KO2 all-terrain tires (37x12.50R17LT) are the largest of any production SUV in America. Two Ford Performance-designed 17-in. x 8.5-in. beadlock-capable wheels are available. An electric-power steering rack and housing influenced by F-150 Raptor, as well as larger-diameter inner and outer tie rod ends, were added to further upgrade Bronco Raptor.

To give Bronco Raptor even more desert-running power, the Ford powertrain team developed the proven twin-turbo 3.0-liter V6 EcoBoost engine with specific Raptor-level tuning to meet Ford Performance standards. With a target of more than 400 hp, Bronco Raptor will be the most powerful street-legal Bronco ever, with intercooling and air-induction systems designed to endure the higher ambient desert temperatures.

For higher-speed desert capabilities or crawling over rocks, the compacted graphite iron-block engine, which saves weight while providing strength for added durability, is paired with a 10-speed SelectShift automatic transmission. A true dual-exhaust system, featuring first-for-Bronco active-valve technology, uses near-equal-length pipes for an improved exhaust note. The system allows drivers to alter the sound of their Bronco Raptor with four selectable exhaust modes, including Normal, Sport, Quiet, and Baja.

The hood on Bronco Raptor is made of sheet-molding compound, offering the design team the ability to dramatically sculpt its muscular shape. An integrated hood vent is molded-in-color Carbon Black and fender vents are painted body color. Raptor logos on the left and right of the hood bulge hint at the twin-turbo power underneath.

Inside, Bronco Raptor features a familiar heritage-inspired horizontal dash, integrating an all-digital 12-in. cluster. The cluster allows drivers to select from various views, including a Bronco Raptor-exclusive Performance View that emphasizes tachometer and gear readings and allows the customization of gauges. 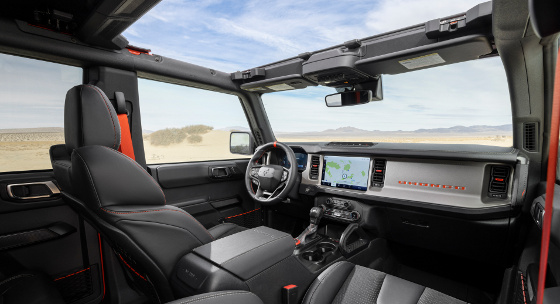 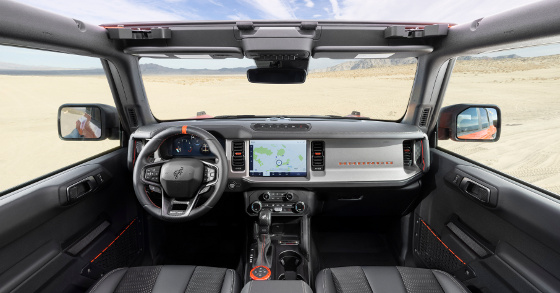 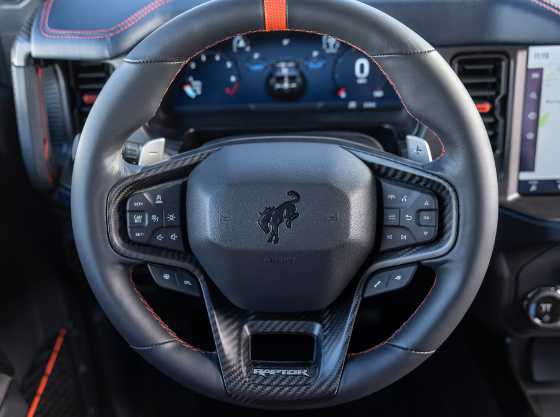 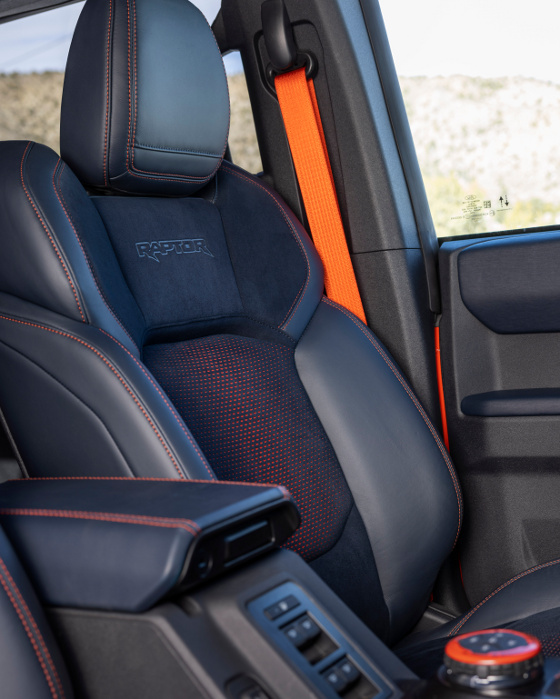 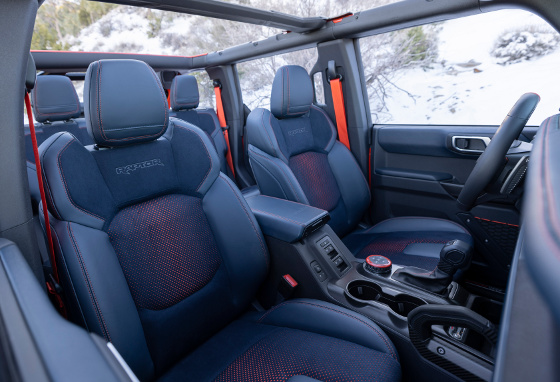 Bronco Raptor comes standard with a High Package that includes SYNC4 with 12-in. touchscreen with swipe capability, information on-demand panel, and enhanced voice recognition. Other technology features include an exterior camera with 360-degree viewing capability. The Lux Package is available for customers looking for even more human-centered technology, such as an available 10-speaker B&O audio system and Adaptive Cruise Control.

Ford did not release pricing, but Car and Driver says the 2022 Ford Bronco Raptor will start at $69,995.

Customers can begin placing orders in March. Go to ford.com/bronco/ for updates. There is no official Ford page for this vehicle yet -- you will just have to check back or sign up for updates. 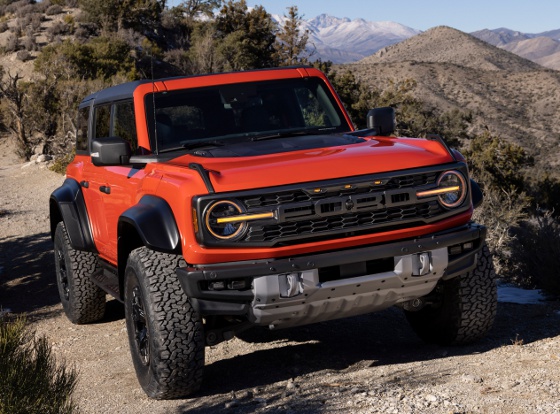