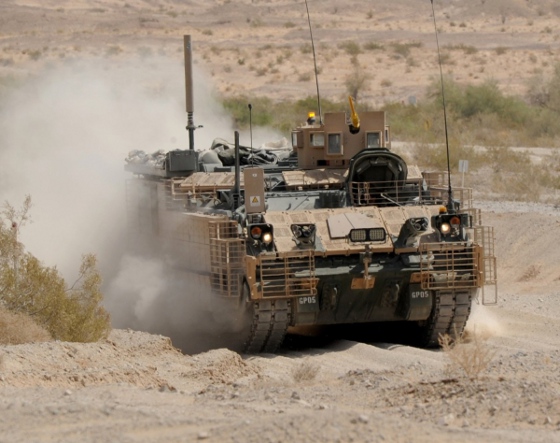 Soldiers are getting a chance to evaluate and train with a new armored turret system for the Armored Multi-Purpose Vehicle, the latest U.S. Army platform within the high-priority Next Generation Combat Vehicle modernization program.

The OCWS system, which addresses the ongoing need to develop advanced armor protection and capabilities for Soldiers, is part of the broad sweep of modernization efforts within the U.S. Army. The advanced protection kit has a new armor alloy and a titanium hatch design.

The OCWS turret protects the vehicle commander, who operates as the gunner on the top side of the vehicle. Essential features include periscopes, motorized rotation, and a spacious interior that allows the gunner to perform complex missions under protection. The weapon mount on the system gives the gunner full access to the suite of crew served weapons, providing a range of firepower options.

"The OCWS is definitely one of our more sophisticated turret systems," said Thomas Kiel, who leads the engineering activity for U.S. Army and U.S. Marine Corps armored and tactical vehicle turrets within the DEVCOM Armaments Center Force Protection team. "The AMPV was developed to operate on the front lines of the battlefield, and our team had to accommodate the challenging requirements associated with that." 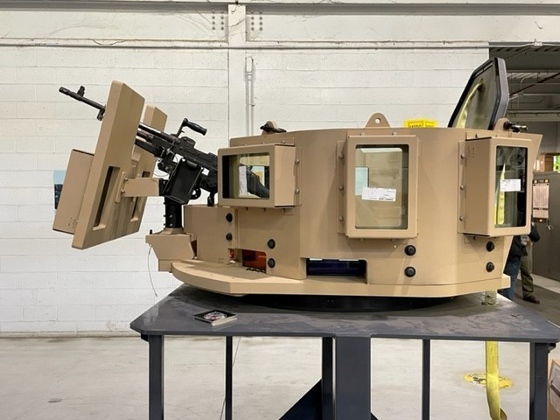 The new Objective Commander's Weapon Station turret protects the Vehicle Commander, who operates as the gunner on the top side of the vehicle. Essential features include the periscopes, motorized rotation, and a spacious interior that allow the gunner to perform complex missions under protection. [Credit: U.S. Army photo]

The OCWS includes a combination of opaque and transparent armor that is specially configured to provide advanced protection and situational awareness for the Commander. The Armaments Center works closely with DEVCOM's Army Research Laboratory to ensure that the high-performing armor materials are lightweight, affordable, and readily available.

"Our initial prototype was integrated with the vehicle at the test site for a formal user evaluation," said Narayan Bhagavatula, program lead for Gunner Protection Systems within Program Manager Soldier Lethality, also located at Picatinny Arsenal.

Experienced warfighters, program managers, and Picatinny engineers participated in a Human Systems Integration event at the Aberdeen Test Center for a complete evaluation of every aspect of the new turret. "It is critical that the OCWS meets the needs of the Soldier," said Bhagavatula. "User feedback is the most important aspect of our development process."

At the Soldier-centered event, the turret team gathers all comments and recommendations from Soldiers and incorporates them into the design. Engineering analysis of the updated computer models follows each design change.

"We're able to really push the envelope on system complexity and performance because of recent advances in modeling and simulation," said Kiel. The engineers work closely with the Gaming, Interactive Technologies & Multimedia team at the Armaments Center to evaluate computer models within a virtual environment that simulates various battlefield scenarios, from dense urban combat to open terrain, under certain weather conditions. 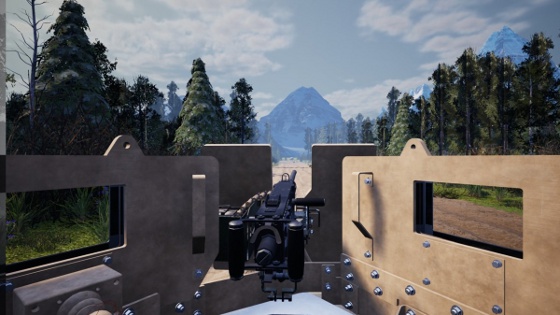 A computer simulation from the gunner's perspective allows users to evaluate various design options for the turret, as well as to evaluate target-engagement performance and situational awareness. The system can be operated remotely over a network, making it possible to receive instant feedback from experienced warfighters from around the country. [Credit: U.S. Army photo]

In collaboration with Rowan University in Glassboro, New Jersey, the Armaments Center is acquiring new simulation technologies and toolsets that make it possible to evaluate the overall effectiveness of new weapon systems through fully immersive environments.

"Through advanced modeling, we can predict the behavior of our turrets under extreme stress, as well as understand how the system will be used during combat," said Kiel. "The engineering data we generate is treated as a weapon system and is managed and secured as such," he added.

The DEVCOM Armaments Center has the lead within the DOD in the development of Tactical Vehicle Turret Systems. More than 50,000 systems have been fielded on a variety of platforms, including the Humvee, Mine Resistant Ambush Protected Vehicles, the MRAP All-Terrain Vehicle, and others. Objective Gunner Protection Kit Turrets are standard for the Joint Light Tactical Vehicle.

At least 14 patents have been issued related to the development of turret systems, including three that were selected as Army's Greatest Inventions [Motorized Traversing Unit (allows for continuous firing while rotating), Objective Weapon Elevation Kit (increases weapons pointing from 67 to 80 degrees), and the Picatinny Blast Shield (lightweight, quick-install flank protection system designed for maximum IED blast deflection)]. Army's Greatest Inventions awards are considered somewhat of a "Soldier's Choice Award" because nominations are judged by a panel of noncommissioned officers with recent combat experience as well as practical, hands-on experience.

The Product Data Management team at Picatinny is responsible for processing and maintaining all aspects of weapon system data, which is used throughout the Armaments Center enterprise for various functions such as prototype fabrication, structural modeling, and cost analysis. "The technical data itself is a strategic asset for the U.S. Army and a crucial component in achieving military advantage," Kiel said.

"We built all of the prototype OCWS turrets in-house over the last 18 months," said Bhagavatula. "Meeting the aggressive test schedule was a top priority, along with finalizing the technical data package for the start of low-rate production," he added. Assembled within its Prototype Integration Facility, the Armaments Center provided 20 OCWS turrets for test and evaluation.

Follow-on operational testing of the AMPV with Soldiers is underway.