Ford and Rice U. turning plastic from end-of-life F-150 trucks into high-value graphene for new vehicles

The part of an old car that gets turned into graphene could come back as a better part for a new car. 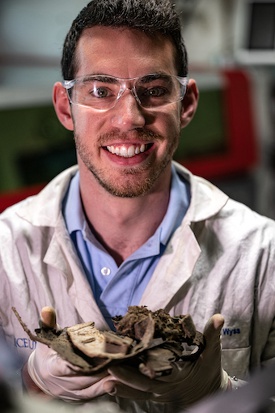 Rice graduate student Kevin Wyss holds untreated parts from an end-of-life truck that get ground into powder and turned into graphene via the lab's flash Joule heating process. [Credit: Photo by Jeff Fitlow]

The average SUV contains up to 350 kg (771 lb) of plastic that could sit in a landfill for centuries but for the recycling process reported in the debut issue of a new Nature journal, Communications Engineering.

The goal of the project led by Rice chemist James Tour and graduate student and lead author Kevin Wyss was to reuse that graphene to make enhanced polyurethane foam for new vehicles. Tests showed the graphene-infused foam had a 34% increase in tensile strength and a 25% increase in low-frequency noise absorption. That's with only 0.1% by weight or less of graphene.

And when that new car is old, the foam can be flashed into graphene again.

"Ford sent us 10 pounds of mixed plastic waste from a vehicle shredding facility," Tour said. "It was muddy and wet. We flashed it, we sent the graphene back to Ford, they put it into new foam composites, and it did everything it was supposed to do.

"Then they sent us the new composites, and we flashed those and turned them back into graphene," he said. "It's a great example of circular recycling."

The researchers cited a study that estimates the amount of plastic used in vehicles has increased by 75% in just the past six years as a means to reduce weight and increase fuel economy.

Segregating mixed end-of-life plastic by type for recycling has been a long-term problem for the auto industry, Tour said, and it's becoming more critical because of potential environmental regulations around end-of-life vehicles. "In Europe, cars come back to the manufacturer, which is allowed to landfill only 5% of a vehicle," he said. "That means they must recycle 95%, and it's just overwhelming to them."

Much of the mixed plastic ends up being incinerated, according to co-author Deborah Mielewski, technical fellow for sustainability at Ford, who noted the U.S. shreds 10 to 15 million vehicles each year, with more than 27 million shredded globally.

"We have hundreds of different combinations of plastic resin, filler, and reinforcements on vehicles that make the materials impossible to separate," she said. "Every application has a specific loading/mixture that most economically meets the requirements."

"These aren't recyclables like plastic bottles, so they can't melt and reshape them," Tour said. "So, when Ford researchers spotted our paper on flash Joule heating plastic into graphene, they reached out."

Flash Joule heating to make graphene, introduced by the Tour lab in 2020, packs mixed ground plastic and a coke additive (for conductivity) between electrodes in a tube and blasts it with high voltage. The sudden, intense heat -- up to nearly 5,000 degrees F -- vaporizes other elements and leaves behind easy-to-solubilize, turbostratic graphene.

Flash heating offers significant environmental benefits, as the process does not require solvents and uses a minimum of energy to produce graphene.

To test whether end-of-life, mixed plastic could be transformed, the Rice lab ground the shredder "fluff" made of plastic bumpers, gaskets, carpets, mats, seating, and door casings from end-of-life F-150 pickup trucks to a fine powder without washing or pre-sorting the components.

The lab flashed the powder in two steps, first under low current and then high current in a heater Wyss custom designed for the experiment.

Powder heated between 10 to 16 seconds in low current produced a highly carbonized plastic accounting for about 30% of the initial bulk. The other 70% was outgassed or recovered as hydrocarbon-rich waxes and oils that Wyss suggested could also be recycled.

The carbonized plastic was then subjected to high-current flashing, converting 85% of it into graphene while outgassing hydrogen, oxygen, chlorine, silicon, and trace metal impurities.

When asked if any hazardous chemicals/substances are released from the flashing process, Tour told Designfax, "When industrialized, all gases will be trapped upon exit. The hydrogen (H2) will be used to power the equipment, small hydrocarbons the same, other gases tapped for separation and sale or proper disposal, and oligomers sold for making more polymer or lubricants." 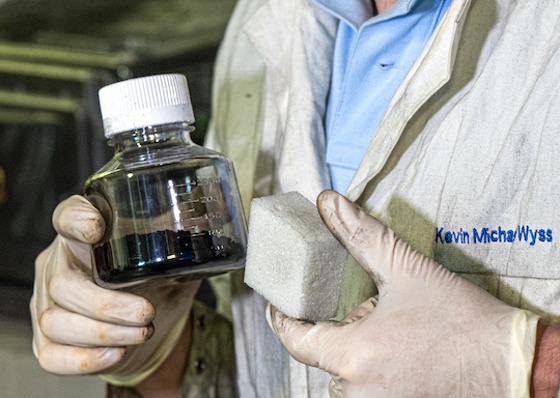 Rice graduate student Kevin Wyss holds a vial of graphene and samples of the graphene-reinforced polyurethane made by the Ford Motor Company. [Credit: Photo by Jeff Fitlow]

The chance to incorporate life-cycle analysis (LCA) into a Rice research project was also a draw for Wyss. "I'm driven by sustainability, and it's where I want to focus in my career," he said.

The LCA involved comparing graphene from flashed car parts to that produced by other methods, and evaluating recycling efficiency. Their results showed flash Joule heating produced graphene with a substantial reduction in energy, greenhouse gas emissions, and water use when compared to other methods, even including the energy required to reduce the plastic shredder fluff to powder.

Ford has been using up to 60 lb of polyurethane foam in its vehicles, with about 2 lb of that being graphene-reinforced since 2018, according to co-author Alper Kiziltas, a technical expert at Ford research who focuses on sustainability and emerging materials. "When we got the graphene back from Rice, we incorporated it into our foam in very small quantities and saw significant improvement," he said. "It exceeded our expectations in providing both excellent mechanical and physical properties for our applications."

Graphene clearly has a future at Ford. The company first introduced it into a variety of other under-the-hood components and in 2020 added a graphene-reinforced engine cover. Kiziltas said the company expects to use it to reinforce hard plastics as well.

"Our collaborative discovery with Rice will become even more relevant as Ford transitions to electric vehicles," Mielewski said. "When you take away the noise generated by the internal combustion engine, you can hear everything else in and outside the vehicle that much more clearly."

"It's much more critical to be able to mitigate noise," she said. "So we desperately need foam materials that are better noise and vibration absorbers. This is exactly where graphene can provide amazing noise mitigation using extremely low levels."