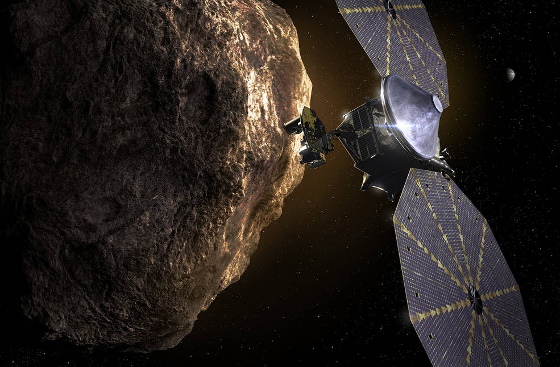 Lucy was mere hours into its 12-year flight, but an unexpected challenge had surfaced for the first-ever Trojan asteroids mission. Data indicated that one of Lucy's two solar arrays powering the spacecraft's systems -- designed to unfurl like a hand fan -- hadn't fully opened and latched, and the team was figuring out what to do next.

Teams from NASA and Lucy mission partners quickly came together to troubleshoot. On the phone were team members at Lockheed Martin's Mission Support Area outside of Denver, who were in direct contact with the spacecraft.

The conversation was quiet, yet intense. At one end of the room, an engineer sat with furrowed brow, folding and unfolding a paper plate in the same manner that Lucy's huge circular solar arrays operate.

There were so many questions. What happened? Was the array open at all? Was there a way to fix it? Would Lucy be able to safely perform the maneuvers needed to accomplish its science mission without a fully deployed array?

With Lucy already speeding on its way through space, the stakes were high.

VIDEO: Lucy's solar-powered journey continues. Lucy made a picture-perfect launch on October 16, 2021, but when the spacecraft began to unfurl its solar arrays, it encountered an anomaly. [Credit: NASA's Goddard Space Flight Center]

"This is a talented team, firmly committed to the success of Lucy," said Donya Douglas-Bradshaw, former Lucy project manager from NASA Goddard. "They have the same grit and dedication that got us to a successful launch during a once-in-a-lifetime pandemic."

United in their pursuit to ensure Lucy would reach its fullest potential, the team began an exhaustive deep dive to determine the cause of the issue and develop the best path forward.

Given that the spacecraft was otherwise perfectly healthy, the team wasn't rushing into anything.

"We have an incredibly talented team, but it was important to give them time to figure out what happened and how to move forward," said Hal Levison, Lucy's principal investigator from SwRI. "Fortunately, the spacecraft was where it was supposed to be, functioning nominally, and -- most importantly -- safe. We had time."

Staying focused during many long days and nights, the team worked through options. To evaluate Lucy's solar array configuration in real time, the team fired thrusters on the spacecraft and gathered data on how those forces made the solar array vibrate. Next, they fed the data into a detailed model of the array's motor assembly to infer how rigid Lucy's array was -- which helped uncover the source of the issue.

At last, they closed in on the root cause: a lanyard designed to pull Lucy's massive solar array open was likely snarled on its bobbin-like spool.

In one, they would pull harder on the lanyard by running the array's back-up deployment motor at the same time as its primary motor. The power from two motors should allow the jammed lanyard to wind in further and engage array's latching mechanism. While both motors were never originally intended to operate at the same time, the team used models to ensure the concept would work. 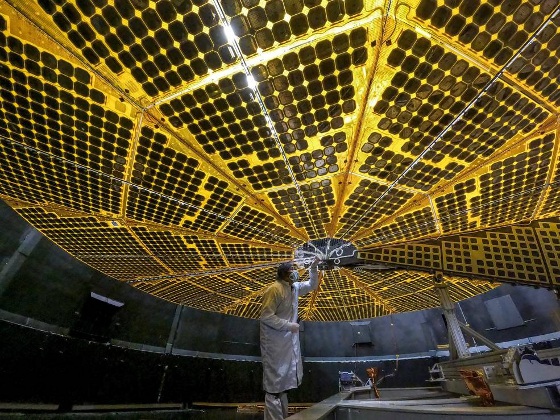 The second option: use the array as it was -- nearly fully deployed and generating more than 90% of its expected power.

"Each path carried some element of risk to achieve the baseline science objectives," said Barry Noakes, Lockheed Martin's deep space exploration chief engineer. "A big part of our effort was identifying proactive actions that mitigate risk in either scenario."

The team mapped out and tested possible outcomes for both options. They analyzed hours of the array's test footage, constructed a ground-based replica of the array's motor assembly, and tested the replica past its limits to better understand risks of further deployment attempts. They also developed special, high-fidelity software to simulate Lucy in space and gauge any potential ripple effects a redeployment attempt could have on the spacecraft.

After months of simulations and testing, NASA decided to move forward with the first option -- a multi-step attempt to fully redeploy the solar array. On seven occasions in May and June, the team commanded the spacecraft to simultaneously run the primary and back-up solar array deployment motors. The effort succeeded, pulling in the lanyard, and further opening and tensioning the array.

The mission now estimates that Lucy's solar array is between 353 degrees and 357 degrees open (out of 360 total degrees for a fully deployed array). While the array is not fully latched, it is under substantially more tension, making it stable enough for the spacecraft to operate as needed for mission operations.

The spacecraft is now ready and able to complete the next big mission milestone: an Earth-gravity assist in October 2022. Lucy is scheduled to arrive at its first asteroid target in 2025.