Attendees at North America's leading machine tool show (IMTS) are experiencing how the all-new collaborative, industrial cobot from Universal Robots delivers the longest reach and payload in its class, offering the ability to automate even more hard-to-staff tasks in a market struggling to hire. 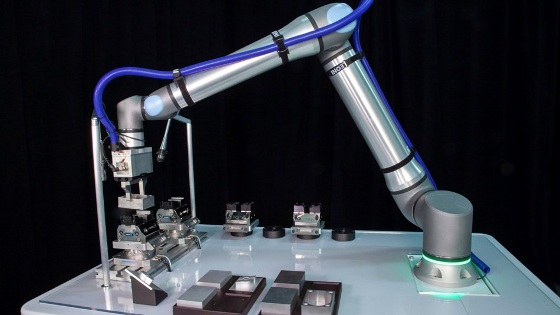 The new UR20 from Universal Robots greatly expands automation opportunities such as the ability to reach farther into machines, tend several machines in the same cycle, and handle 25% heavier parts.

The tedious task of loading and unloading parts into machines has long been a bread-and-butter application for cobots gaining significant traction in the industry. With its 1,750-mm (68.9-in.) reach and 20-kg (44.1 lb) payload, the new UR20 from Universal Robots greatly expands automation opportunities such as the ability to reach farther into machines, tend several machines in the same cycle, and handle 25% heavier parts. Despite being UR's heaviest robot, the UR20 is the lightest cobot in its class, weighing only 64 kg (141.1 lb), making it both a versatile technical tool and a manual laborer.

"More than half of all U.S. manufacturing tasks are automatable, a fact that businesses start to realize as they simply cannot fill open positions," says Joe Campbell, Universal Robots' senior manager of Applications Development and Strategic Mrketing. "We are launching a redefined cobot that has been completely re-engineered from the ground up, focused on freeing up more manpower within a wide range of human-scale automation tasks." 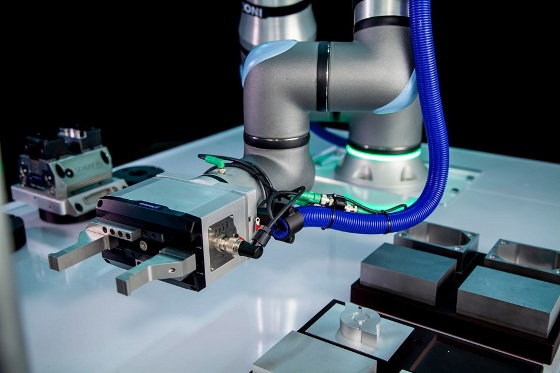 At IMTS, the UR20 will be equipped with the new EGU universal parallel electric gripper from SCHUNK.

At Universal Robots' IMTS booth #236949 in Chicago, attendees will experience first-hand what that looks like as the UR20 loads and unloads heavy workpieces into a machine fixture requiring a long reach. "We have completely re-engineered the cobot's field-serviceable joints that deliver 30% more speed and torque within a closed capsule," says Universal Robots' VP of Innovation and Strategy, Anders Beck, explaining how the UR20's base joint produces 700 Nm of torque. "This is more than a performance-model Tesla produces on all of its wheels. Even with the increase in reach and torque, we've managed to retain the cobot's 50 microns repeatability, while still using standard single-phase power."

Universal Robots also kept the intuitive user interface, pioneered by the company, while incorporating advanced software enhancements, giving users unprecedented motion control capabilities. The rapidly expanding UR+ ecosystem of third-party components and application kits, certified to be plug-and-play with UR cobots, also supports the UR20. At IMTS, UR+ partner SCHUNK will launch the EGU universal parallel electric gripper with the ability to handle varying part dimensions. The new gripper integrates seamlessly with the new UR20 through a URCap (software handshake between the peripheral and the robot arm).

Growing number of UR cobot-powered OEM solutions showcased
Universal Robots recently posted a robust 30% growth across the first two quarters of 2022 compared to the first half of 2021. A significant contributor to UR's growth is OEMs that now increasingly incorporate UR cobots into full solutions, a sales channel that grew 39% year over year. At IMTS, UR has invited several OEM and UR+ partners to its booth, including Vectis Automation, Hirebotics, VersaBuilt Robotics, Robotiq, Kane Robotics, PCC Robotics, and Mid Atlantic Machinery.

New applications for fabricating, machine tending, and finishing tasks
For fabricators, Vectis Automation will demo the water-cooled version of its Cobot Welding Tool, delivering heavy-duty welds along with the Vectis Cobot Plasma Cutting Tool that enables complex cuts on high-mix 3D parts and tubes for a fraction of the cost of existing 3D shape-cutting automation. Hirebotics will showcase its Cobot Welder with a rotary positioner to demonstrate how the system can communicate with positioners to weld parts that aren't possible with just the cobot. The Press Brake Operator Package from Mid Atlantic Machinery showcases a UR10e on a modular parts cart with a machine tool interface and a zone safety scanner that ensures shop safety. 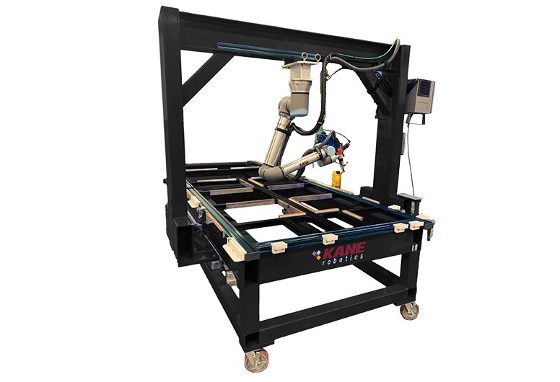 New innovative ways for cobots to interact with CNCs will be highlighted by Robotiq's new Machine Tending Solution that emulates the machine operator with no need to modify or alter the machine controls. Since it is non-intrusive, the new Robotiq solution will work with any brand of CNC. VersaBuilt's UR+ certified Mill Automation System with MultiGrip automation work-holding will allow machinists to easily add any new CNC parts that can be held with a vise. PCC Robotics will demonstrate an efficient machine cell setup as a UR10e equipped with OnRobot's dual 3FG15 gripper mounted on EasyRobotics' ProFeeder feeds parts to an air vise.

For a finishing touch, Kane Robotics will show the GRITâ ¢ XL-X robotic system that is ideal for sanding, grinding, and finishing, including customized programming and robust data solutions.

Free cobot training sessions at the show
Attendees looking to use cobots for automation tasks but unsure where to begin or how to program them are invited to attend free hands-on training sessions inside McCormick Place at IMTS. Each session is tailored to a specific application taught by certified UR product trainers. "Our cobots will be in more than 20 other booths at the show as well, each showcasing different ways to incorporate cobots into machining applications," says UR's Campbell. "We're looking forward to meet every IMTS attendee no matter where they're at in their automation journey."