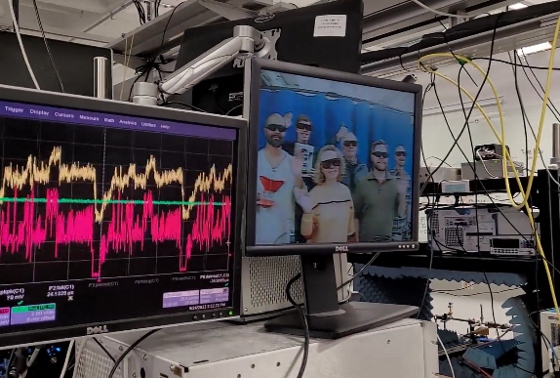 Researchers at the U.S. National Institute of Standards and Technology (NIST) have adapted their atom-based radio receiver to detect and display live color television and video games.

Atom-based communications systems are of practical interest because they could be physically smaller and more tolerant of noisy environments than conventional electronics. Adding video capability could enhance radio systems in, for example, remote locations or emergency situations.

"We figured out how to stream and receive videos through the Rydberg atom sensors," said project leader Chris Holloway. "Now we are doing video streaming and quantum gaming, streaming video games through the atoms. We basically encoded the video game onto a signal and detected it with the atoms. The output is fed directly into the TV."

VIDEO: NIST scientists demonstrate using rubidium atoms in a Rydberg state as receivers that can pick up live video, and even play video games. A stable radio signal is applied to the glass container filled with atoms in a Rydberg state. The modulated output is then fed to a television where an analog-to-digital converter transforms the signal into a video graphics array format for display. This work is part of the NIST on a Chip program.

Researchers use two different color lasers to prepare gaseous rubidium atoms in Rydberg states in a glass container. The team previously used the setup with cesium atoms to demonstrate the basic radio receiver, and a "headphone" appliance to boost sensitivity a hundredfold.

To prepare to receive video, a stable radio signal is applied to the glass container filled with atoms. The team can detect energy shifts in the Rydberg atoms that modulate this carrier signal. The modulated output is then fed to a television. An analog-to-digital converter transforms the signal into a video graphics array format for display.

To display a live video signal or video game, this input is sent from a video camera to modulate the original carrier signal, which is then fed to a horn antenna directing the transmission to the atoms. Researchers use the original carrier signal as a reference and compare it to the final video output detected through the atoms to evaluate the system.

The researchers studied the laser beam sizes, powers, and detection methods required for the atoms to receive video in standard-definition format. The beam size affects the average time the atoms remain in the laser interaction zone. This time is inversely related to the bandwidth of the receiver; that is, a shorter time and smaller beam produce more data. That's because atoms move in and out of the interaction zone, so smaller areas result in a higher signal "refresh rate" and better resolution.

Researchers found that small beam diameters (less than 100 micrometers) for both lasers led to much faster responses and color reception. The system achieved a data rate on the order of 100 megabits per second, considered an excellent speed for video gaming and household internet. Research is ongoing to increase the system's bandwidth and data rates.

This work was partially funded by the Defense Advanced Research Projects Agency (DARPA).