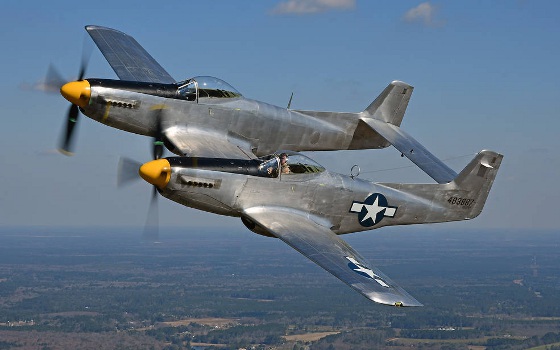 On Dec. 14, 1949, an XF-82 Twin Mustang aircraft hit patches of ice and skidded sideways off the runway after completing a research flight for the NACA's (National Advisory Committee for Aeronautics) Flight Propulsion Laboratory (today, NASA Glenn) in Cleveland, OH. The XF-82's wheels sank deep into the mud caused by two unseasonable 60-degree days earlier that week. The pilots were uninjured, but the damage was severe enough that the center decided to scrap the aircraft. Thus began the XF-82's long journey and eventual return to flight 70 years later in 2019.

In the post-War years, the F-82 performed escort and night fighter roles and scored the United States' first air-to-air victory in the Korean War. 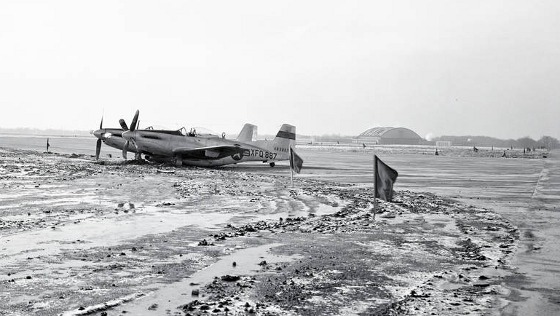 The XF-82 after sliding off the runway at Cleveland Municipal Airport on Dec. 14, 1949. The propeller and radiator housing were damaged, and the wheels sunk into the mud. The NACA hangar is in the background. [Credits: NASA]

The NACA's Cleveland laboratory acquired one of the XF-82s (tail number 44-83887) in October 1947 to support the study of ramjet engines as they accelerated through the transonic and supersonic realms. At the time, there were no NACA wind tunnels capable of testing engines at those speeds. The flight program, conducted from 1948 to 1953, consisted of a series of launches of ramjet-powered missiles over the Atlantic Ocean near Wallops Island, VA. 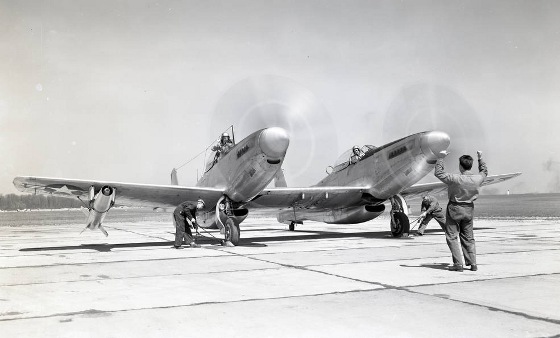 The XF-82 is prepared for takeoff with an experimental ramjet missile underneath its right wing on April 22, 1949. [Credits: NASA]

The 16-ft-long missiles were mounted underneath the XF-82's right wingspan. Pilots Joseph Walker and William Swan flew the aircraft to 30,000 ft and Mach 0.5 before firing the experimental engine. The missile sent pressure and temperature data back to ground stations as it accelerated to the desired speeds before impacting the ocean.

The earlier XF-82 accident interrupted the program for several months in early 1950 until the NACA obtained another F-82E (tail number 44-65168) to resume the flights.

The XF-82 runway incident, which had caused significant damage to the left propeller, the center wingspan, radiators, and wheel struts, was just the start of the aircraft's woes. The NACA towed it to a remote section of the airfield and removed the engines and propellers.

It was sold shortly thereafter to Walter Soplata, a local collector of retired military aircraft. Soplata cut the aircraft in half to transport it to his farm in Newbury, OH, and sold several key components over the decades. The military subsequently borrowed the right fuselage for destructive testing.

Decades later in 1997, veteran aircraft restorer Tom Reilly paid a visit to Soplata's boneyard and came across the badly damaged XF-82. Even though the aircraft was not for sale, Reilly began searching for parts and financial backers. In 2008, Soplata agreed to sell the XF-82, and the restoration began in earnest. 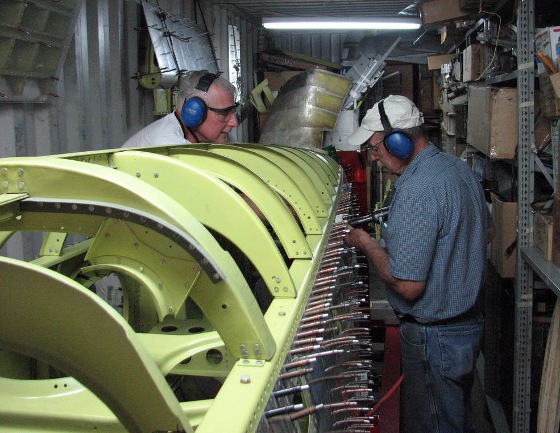 Reilly was joined by a cadre of aviation enthusiasts at his base in Douglas, GA. Parts were salvaged from around the world, including the site of a 1950 F-82 crash in Alaska. Over the next decade, the team spent 207,000 hours replacing every missing component, from the extremely rare Rolls-Royce Merlin V-1650 engines to the stencil lettering.

After a series of final hurdles had been cleared, the XF-82 officially took flight for the first time on Jan. 28, 2019, in Georgia. Reilly showed his work off publicly that summer at the Experimental Aircraft Association's AirVenture event in Oshkosh, WI.

The XF-82 is currently displayed at the Warbird Museum in Titusville, FL.

* The F-82 aircraft were originally designated as P-82s. In 1948 they were redesignated as F-82s to reflect the change of their primary mission from pursuit to fighter. This aircraft is referred to as XF-82 in the NACA logbooks.

Editor's Note: TomsAviation has a video of an interview with Reilly from May 2020 that has lots of interesting details about the restored plane, the restoration process, and how it flies today. The end of the video also contains footage of the plane in the air. You can view the video here.