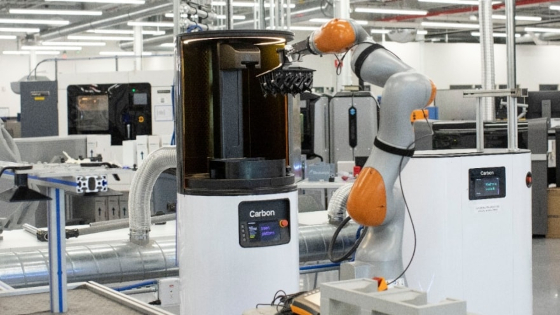 Using a mobile robot, Ford now operates 3D printers autonomously. The company has filed several patents for the technology in its drive to innovate.

At Ford's Advanced Manufacturing Center in Redford, MI, Javier is tasked with operating the 3D printers completely on his own.

He is always on time, very precise in his movements, and he works most of the day -- taking only a short break to charge up. This innovative robot on wheels from supplier KUKA, nicknamed "Javier" by Ford's additive manufacturing operators, is integral to the company's development of an industry-first process to operate 3D Carbon printers with an autonomous mobile robot rather than a fixed, stationary unit.

"This new process has the ability to change the way we use robotics in our manufacturing facilities," said Jason Ryska, director, Global Manufacturing Technology Development. "Not only does it enable Ford to scale its 3D-printer operations, it extends into other aspects of our manufacturing processes. This technology will allow us to simplify equipment and be even more flexible on the assembly line."

Ford has achieved great accuracy with Javier, using his feedback to significantly reduce margins of error. In addition to 3D printers, the method can be applied to a vast array of robots already working at the company to increase efficiency and reduce costs. In its drive to innovate, Ford has filed several patents related to the overall process, communication interfaces, and precise positioning of the robot, which does not require use of a camera vision system to "see." 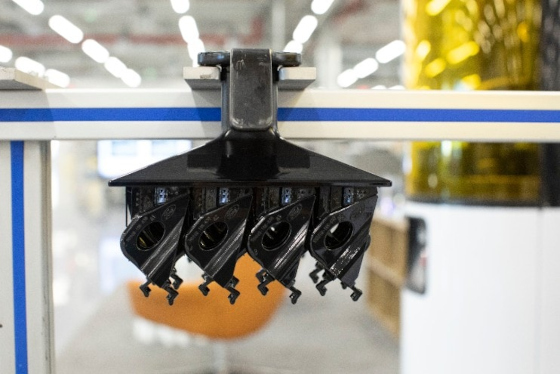 Ford has used Carbon 3D printers to make low-volume, custom parts, such as a brake line bracket for the Mustang Shelby GT500.

Typically, different pieces of equipment from various suppliers are unable to interact because they do not run the same communication interface. Ford developed an application interface program that allows different pieces of equipment to "speak the same language" and send constant feedback to each other. For example, a Carbon 3D printer tells the KUKA autonomous mobile robot when the printed product will be finished, then the robot lets the printer know the robot has arrived and is ready for pick-up. This innovative communication is what makes the whole process possible.

Javier enables Ford to operate its 3D printers all night long, even after employees have left for the day. Not only does this increase throughput, it reduces the cost of custom-printed products. Ford has used the printer to make low-volume, custom parts, such as a brake line bracket for the Performance Package-equipped Mustang Shelby GT500.

While the process itself is autonomous, Ford operators are responsible for uploading 3D designs to the printer and maintaining the machinery, and for engineering new ways to use the technology.