Design: LiDAR and radar sensors may fit in headlights

Today's vehicles are able to take on more and more functions without requiring driver input. Cruise control automatically maintains the right distance from the car in front, lane departure warning systems correct the vehicle's path if necessary, and emergency braking kicks in if the driver is caught off guard.

All this is possible thanks to cameras in the passenger area and radar sensors in the radiator grille, and the future is set to see cars do even more by themselves. Making this happen means using significantly more sensors, but cramming grilles full of electronic components isn't something that car designers favor.

Radar and LiDAR sensors integrated into headlights
In Germany, five Fraunhofer institutes, including the Institute for High-Frequency Physics and Radar Techniques (FHR), have joined forces as part of the Smart Headlight project, which aims to figure out how to install more and more sensors in a way that is both space saving and as subtle as possible -- without compromising on function or performance.

The project seeks to develop a sensor-integrated headlight for driver assistance systems that makes it possible to combine a range of sensor elements with adaptive light systems. The aim is to improve the sensors' ability to identify objects on the road -- and especially other road users, such as pedestrians. LiDAR (Light Detection And Ranging) sensors, for instance, can be used in electronic brake assist or distance control systems. 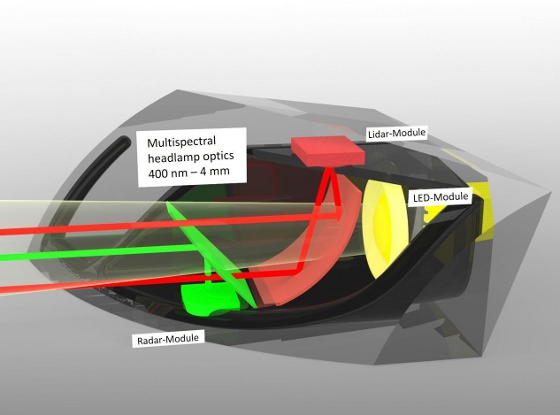 "We're integrating radar and LiDAR sensors into headlights that are already there anyway, and what's more, they're the parts that ensure the best possible transmission for optical sensors and light sources and are able to keep things clean," says Tim Freialdenhoven, a researcher at Fraunhofer FHR. LiDAR sensors operate using a measuring principle that is based on determining the time between a laser pulse being emitted and the reflected light being received, a method that produces exceptionally precise distance measurements.

The first stage in creating headlight sensors involves designing a LiDAR system that is suitable for integration into automotive technology. This needs to consider the fact that the light beamed onto the road by the headlight cannot be impeded by the two additional sensors, even though the LEDs that are responsible for the light are located far back in the headlight.

For this reason, the researchers are positioning the LiDAR sensors at the top and the radar sensors at the bottom of the headlight casing. At the same time, the beams from both sensor systems need to follow the same path as the LED light -- something that is made more difficult by the fact that all the beams involved have different wavelengths.

According to the researchers, the visible light from the headlight measures in the region of 400 to 750 nm, while infrared LiDAR beams range from 860 to 1,550 nm, close to the visible light range. Radar beams, on the other hand, have a wavelength of 4 mm.

"These three wavelengths need to be merged coaxially -- that is, along the same axis -- and this is where what we call a multispectral combiner comes in," says Freialdenhoven.

Guiding the beams coaxially in this way is crucial for preventing parallax errors, which are complicated to untangle. Additionally, arranging the sensors next to one another would take up significantly more space than a coaxial configuration, so the researchers are getting around this using what are known as bi-combiners. 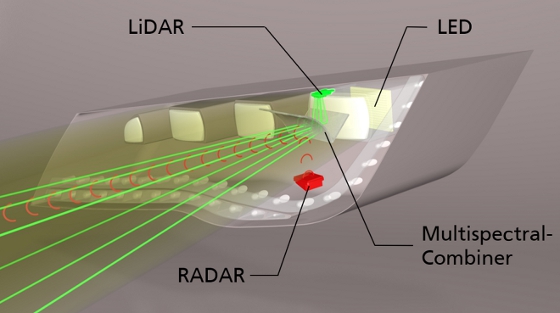 To combine LED light and LiDAR light, this solution uses a dichroic mirror with a special coating, which guides the two beam bundles along a single axis by means of wavelength-selective reflection. The same effect happens in the second combiner (albeit in a more complex way, due to the very different wavelengths), where the LED light, LiDAR light, and radar are combined. As radar sensors are already in widespread use in the automotive sector, bi-combiner designs have to allow manufacturers to continue using existing sensors without the need for modifications.

Radar systems and penetrating the fog
So why combine optical systems, LiDAR, and radar at all?

"Each individual system has its strengths, but also its weaknesses," says Freialdenhoven.

Optical systems, for instance, demonstrate limited performance in situations where visibility is poor, such as foggy and dusty environments. Radar systems, on the other hand, are able to take dense clouds of fog in their stride but are not very good at categorization. Although they are able to tell whether something is a person or a tree, their abilities have nothing on LiDAR systems.

"We're also working on merging data from radar and LiDAR -- something which will add huge value, especially when it comes to reliability," says Freialdenhoven.

The team has already submitted a patent application and is now hard at work on creating a prototype.

The technology could create a whole host of additional options for integrating sensors into driver assistance systems. Smaller light modules, more compact LiDAR sensors, and integrated radar sensors will make it possible to create multi-sensor concepts, particularly with a view to self-driving vehicle technology, where design requirements are becoming more exacting and installation space is limited. As a result, future self-driving systems may be able to not only detect a person, but also analyze their speed, how far away they are, and the angle at which they are positioned in relation to the vehicle.