World's whitest paint now thinner than ever -- ideal for vehicles 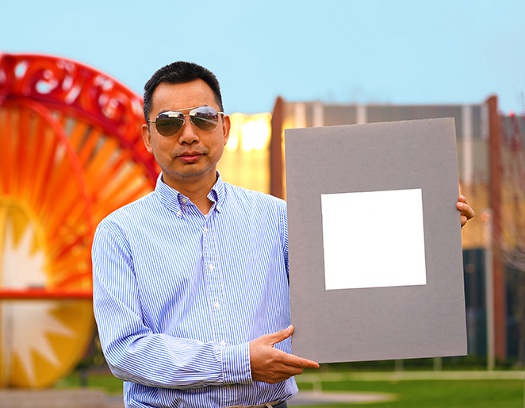 The world's whitest paint, seen in this year's edition of Guinness World Records, keeps surfaces so cool it could reduce the need for air conditioning in some cases. Now, the Purdue University researchers who created the paint have developed a new formulation that is thinner and lighter -- ideal for radiating heat away from cars, trains, and airplanes.

The researchers believe this white may be the closest equivalent of the blackest black, "Vantablack," which absorbs up to 99.9% of visible light.

"I've been contacted by everyone from spacecraft manufacturers to architects to companies that make clothes and shoes," said Xiulin Ruan, a Purdue professor of mechanical engineering and developer of the paint. "They mostly had two questions: Where can I buy it, and can you make it thinner?"

The original world's whitest paint used nanoparticles of barium sulfate to reflect 98.1% of sunlight, cooling outdoor surfaces more than 4.5Â°C below ambient temperature. Cover your roof in that paint, and you could essentially cool your home with much less air conditioning, but there's a problem.

"To achieve this level of radiative cooling below the ambient temperature, we had to apply a layer of paint at least 400 microns thick," Ruan said. "That's fine if you're painting a robust stationary structure, like the roof of a building. But in applications that have precise size and weight requirements, the paint needs to be thinner and lighter."

That's why Ruan's team began experimenting with other materials, pushing the limit of materials' capability to scatter sunlight. Their latest formulation is a nanoporous paint incorporating hexagonal boron nitride as the pigment, a substance mostly used in lubricants. This new paint achieves nearly the same benchmark of solar reflectance (97.9%) with just a single 150-micron layer of paint.

Their research has been published in Cell Reports Physical Science. 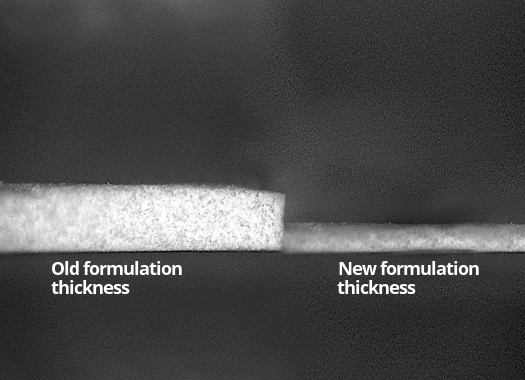 "Hexagonal boron nitride has a high refractive index, which leads to strong scattering of sunlight," said Andrea Felicelli, a Purdue PhD student in mechanical engineering who worked on the project. "The particles of this material also have a unique morphology, which we call nanoplatelets."

Ioanna Katsamba, another PhD student in mechanical engineering at Purdue, ran computer simulations to understand if the nanoplatelet morphology offers any benefits. "The models showed us that the nanoplatelets are more effective in bouncing back the solar radiation than spherical nanoparticles used in previous cooling paints," Katsamba said.

The paint also incorporates voids of air, which make it highly porous on a nanoscale. This lower density, together with the thinness, provides another huge benefit: reduced weight. The newer paint weighs 80% less than barium sulfate paint yet achieves nearly identical solar reflectance.

"This light weight opens the doors to all kinds of applications," said George Chiu, a Purdue professor of mechanical engineering and an expert in inkjet printing. "Now this paint has the potential to cool the exteriors of airplanes, cars, or trains. An airplane sitting on the tarmac on a hot summer day won't have to run its air conditioning as hard to cool the inside, saving large amounts of energy. Spacecraft also have to be as light as possible, and this paint can be a part of that."

As to that other big question -- where can I buy the paint? -- Ruan said, "We are in discussions right now to commercialize it. There are still a few issues that need to be addressed, but progress is being made."

Either way, these Purdue researchers look forward to what the paint could accomplish. "Using this paint will help cool surfaces and greatly reduce the need for air conditioning," Ruan said. "This not only saves money, but it reduces energy usage, which in turn reduces greenhouse gas emissions. And unlike other cooling methods, this paint radiates all the heat into deep space, which also directly cools down our planet. It's pretty amazing that a paint can do all that."

Patent applications for the paint formulation have been filed through the Purdue Research Foundation Office of Technology Commercialization. For further discussion on this intellectual property, contact Will Buchanan at wdbuchanan@prf.org and reference code 2022-RUAN-69542.