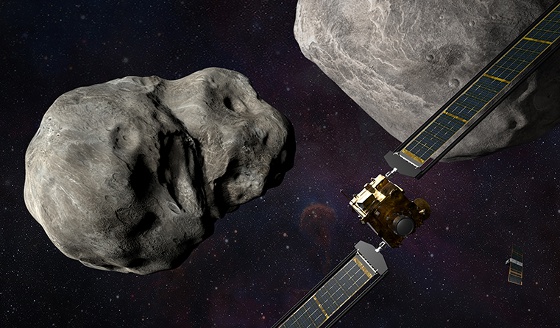 Analysis by NASA's DART investigation team of data obtained during the two weeks after the spacecraft slammed into its target asteroid, Dimorphos, shows the spacecraft's kinetic impact successfully altered the asteroid's orbit. This marks humanity's first time purposely changing the motion of a celestial object and the first full-scale demonstration of asteroid deflection technology.

Prior to DART's impact, it took Dimorphos 11 hours and 55 minutes to orbit its larger parent asteroid, Didymos. Since DART's intentional collision with Dimorphos on Sept. 26, astronomers have been using telescopes on Earth to measure how much that time has changed. Now, the investigation team has confirmed the spacecraft's impact altered Dimorphos' orbit around Didymos by 32 minutes, shortening the 11-hour 55-minute orbit to 11 hours 23 minutes. According to the research team, this measurement has a margin of uncertainty of approximately plus or minus 2 minutes.

Before its encounter, NASA had defined a minimum successful orbit period change of Dimorphos as a change of 73 seconds or more. This early data shows DART surpassed this minimum benchmark by more than 25 times.

"This result is one important step toward understanding the full effect of DART's impact with its target asteroid" said Lori Glaze, director of NASA's Planetary Science Division at NASA Headquarters in Washington. "As new data come in each day, astronomers will be able to better assess whether, and how, a mission like DART could be used in the future to help protect Earth from a collision with an asteroid if we ever discover one headed our way."

Mission background
DART sent a spacecraft about the size of a small car to impact a known asteroid that is not a threat to Earth in order to see if it could change its motion in a way that can be measured accurately via ground-based telescopic observations. DART aimed to show that a spacecraft can autonomously navigate to a target asteroid and intentionally collide with it. It's a method called kinetic impact, and the test was designed to provide important data to help humankind better prepare for an asteroid that might present an impact hazard to Earth.

DART was launched Nov. 24, 2021, from Space Launch Complex 4 East at Vandenberg Space Force Base in California.

DART's one-way trip was to the Didymos asteroid system, which comprises a pair of asteroids -- one small, the other large -- that orbit a common center of gravity. DART's target was the asteroid moonlet Dimorphos, which is approximately 530 ft (160 m) in diameter and orbits Didymos (which means "twin" in Greek), which is approximately 2,560 ft (780 m) in diameter (about a half-mile across). Since Dimorphos orbits the larger asteroid Didymos at a much slower relative speed than the pair orbits the Sun, the slight orbit change resulting from DART's kinetic impact within the binary system can be measured much more easily than a change in the orbit of a single asteroid around the Sun.

According to NASA, "The orbit of Didymos ranges from just outside the orbit of Earth (about 1 AU) to a bit beyond the orbit of Mars (about 2.27 AU) and is slightly inclined with respect to the plane of the planets (called the ecliptic) by about 3 degrees. It takes 2.11 years to make each trip around the Sun."

The asteroid binary system was 6.8 million miles (11 million km) from Earth at the time of impact.

More data still coming in
The investigation team is still acquiring data with ground-based observatories around the world, as well as with radar facilities at NASA Jet Propulsion Laboratory's Goldstone planetary radar in California and the National Science Foundation's Green Bank Observatory in West Virginia. They are updating the period measurement with frequent observations to improve its precision.

Focus now is shifting toward measuring the efficiency of momentum transfer from DART's roughly 14,000-mph collision with its target. This includes further analysis of the "ejecta" -- the many tons of asteroidal rock displaced and launched into space by the impact. The recoil from this blast of debris substantially enhanced DART's push against Dimorphos -- a little like a jet of air streaming out of a balloon sends the balloon in the opposite direction. 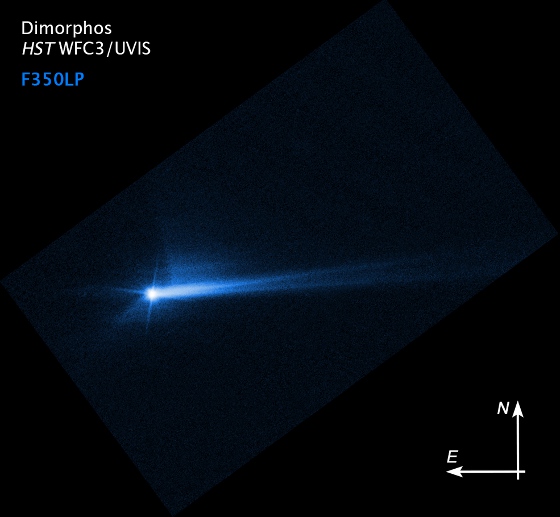 This imagery from NASA's Hubble Space Telescope from Oct. 8, 2022, shows the debris blasted from the surface of Dimorphos 285 hours after the asteroid was intentionally impacted by NASA's DART spacecraft on Sept. 26. The shape of the tail has changed over time. Scientists are continuing to study this material and how it moves in space to better understand the asteroid. [Credits: NASA/ESA/STScI/Hubble]

To understand the effect of the recoil from the ejecta, more information on the asteroid's physical properties, such as the characteristics of its surface and how strong or weak it is, is needed. These issues are still being investigated.

"DART has given us some fascinating data about both asteroid properties and the effectiveness of a kinetic impactor as a planetary defense technology," said Nancy Chabot, the DART coordination lead from the Johns Hopkins Applied Physics Laboratory (APL) in Laurel, MD.

For this analysis, astronomers will continue to study imagery of Dimorphos from DART's terminal approach and from the mission's companion Light Italian CubeSat for Imaging of Asteroids (LICIACube), provided by the Italian Space Agency, to approximate the asteroid's mass and shape. Roughly four years from now, the European Space Agency's Hera project is also planned to conduct detailed surveys of both Dimorphos and Didymos, with a particular focus on the crater left by DART's collision and a precise measurement of Dimorphos' mass.

Johns Hopkins APL built and operated the DART spacecraft and manages the DART mission for NASA's Planetary Defense Coordination Office as a project of the agency's Planetary Missions Program Office.

Neither Dimorphos nor Didymos poses any hazard to Earth before or after DART's controlled collision with Dimorphos.

For more information about the DART mission, go to nasa.gov/dart.