The automotive sector is driven by the need for quality parts, delivered in a timely fashion, and at a competitive price. As such, for various applications, 3D printing is a good fit, allowing the manufacture of impossibly complex geometries in a variety of robust materials in a speedy and cost-effective fashion. Here at 3DPRINTUK, we have experience working with a number of automotive OEMs and Tier 1 and 2 supply chain companies producing both prototypes and small-batch production runs using different powder bed fusion (PBF) technologies for a wide variety of applications. 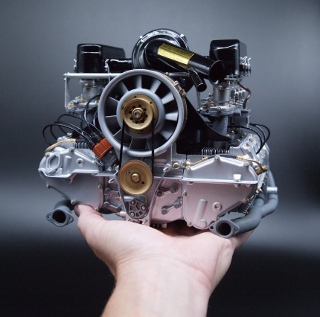 Miniature demo is a real piece of art: A super-accurate 1:4-scale model of the very first Porsche 911 engine ever produced (1965). Almost everything in the photo is SLA printed, including the tiny little nuts and spring clips on the air box. The fan belt is printed by 3DPRINTUK. You can read all about it in detail at wiesnerdesign.com/engine-art.

One company that we are pleased to be working with in the automotive sector is Wiesner Design, a company that combines a passion for classic Porsches and additive manufacturing (AM) to bring rare and no-longer-available parts back to life. Wiesner Design focuses on items that are uneconomical to injection mold in low volumes, especially where complex geometries are involved. In all cases, the company employs AM to produce parts as good as the original or indeed sometimes better.

I was delighted to catch up with the owner of Wiesner Design, Martin Wiesner, to discover his views on 3D printing, how he uses the technology, and his ways of working with us as a specialist 3D-printing bureau. I began by asking Wiesner to explain what it was that he did at Wiesner Design, how long he had been using 3D printing as a technology, and what he used it for.

"I design and manufacture parts for the automotive aftermarket and electric vehicle conversion industries," says Wiesner. "Because of my long history with air-cooled Porsches, most of what I do is centered around classic 911 models and their racing derivatives. This ranges from recreating no-longer-available parts for old Porsches to the integration of modern technologies into such cars.

I bought my fist printer in 2016. It was a somewhat primitive, second-hand model but opened my eyes to what's possible. At the time, 3D printing was viewed by many as a hobby or, at best, a prototyping tool. However, I had other ideas and started experimenting with exotic materials to make end-use parts -- first for my own car, then later for friends, and eventually it became a business. I use 3D printing to produce non-structural or semi-structural automotive components that go into various parts of a car. Non-structural items could be knobs, buttons, air ducts, or electrical connector housings. Semi-structural items would require strength and rigidity (and often heat resistance) to hold parts in place or keep assemblies together."

For Wiesner Design, 3D printing is a preferred process, because production volumes are often not high enough to warrant injection molding and too price sensitive for CNC machining. Furthermore, 3D printing sometimes enables the use of geometries that would be hard or uneconomical to manufacture using traditional methods. These attributes are particularly advantageous in the motorsport and electric conversions industry where production volumes are often low and design methodologies are agile.

Wiesner explains, "I follow quite an elaborate decision tree when considering how to manufacture a part. The very first thing to keep in mind is that not everything can be 3D printed, and not everything that can be 3D printed should be 3D printed. It's important to know when to apply each a specific manufacturing method and when not to. Having said that, 3D-printing technology is steadily evolving, and ever more parts can be printed neatly, strongly, and economically."

"The main factors I base my manufacturing decisions on are strength, heat resistance, surface finish (including detail), and cost. Strength could be divided into impact strength, tensile strength, and more, but to keep it simple let's just ask whether this is a part that needs to be strong, heat resistant, and not brittle. A bracket that goes into the engine bay of a rally car needs to be very strong, heat resistant, and obviously cannot be brittle. This eliminates resin as a solution, because heat-resistant resins tend to be brittle and impact resistant resins can't handle heat. The remaining choice is between FDM and MultiJet fusion (MJF) and/or Selective Laser Sintering (SLS)."

"Now the shape becomes a factor. Could this part be printed strongly and neatly on an FDM machine? This is normally a cheaper option than MJF/SLS and yields a lighter end result. Unfortunately, unless a part was specifically designed for FDM printing, chances are good that it won't be neat and strong at the same time.

"FDM has three weaknesses. First, it easily breaks along layer lines. Second, it may require support structures to print, which results in rough-looking overhangs. Third, it's hard to overlook those amateur-looking layer lines. If none of this is a problem, then FDM is the way to go. However, I always first check what MJF/SLS would cost. Sometimes the price difference doesn't warrant the effort of FDM printing, and I end up using MJF/SLS anyway, enjoying the bonus of a professional-looking part which is stronger than FDM." 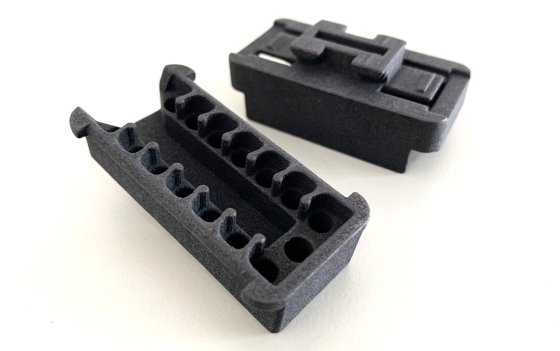 Electrical connector housings found in older Porsches. The originals tend to become brittle after decades of use, whereas the modern PA12 version won't suffer the same fate.

"If a part is customer facing (which includes mechanics, racing drivers, and bystanders peeking into engine bays), it becomes very hard to justify FDM unless the part geometry lends itself towards a neat and strong print at the same time. In many cases, it's worth the extra cost to have such a part MJF/SLS printed to get a strong and visually appealing end result. If the part has a logo or text on it, FDM becomes even less of an option. On the opposite end of the scale are cosmetic things like knobs, buttons, emblems, and items requiring high detail and smooth surfaces. These parts generally require not much strength, never see heat, and could therefore be printed using resin."

Wiesner adopts a pragmatic view of 3D printing and maintains that AM as a technology doesn't magically replace all the old tools in the toolbox. Instead, it's an incredibly powerful new tool that complements the existing tools in ways never thought possible.

Wiesner's advice to any manufacturer is to reach out to an expert who understands the technology from a production perspective, not only as a prototyping tool, and see how it could complement what you are already doing.

For Wiesner, the beauty of AM is it's agility, meaning it can be phased in easily and cost effectively by first targeting low-hanging fruit in your business. It usually starts with something as simple as a jig or fixture that would be somewhat tricky to make otherwise, or finally trying out that oddly shaped item that your development team or engineers have been shying away from. That's how Wiesner ended up designing and manufacturing parts for some globally respected Porsche tuners and manufacturers, by helping them test the water first and showing them a glimpse of what's possible. After that, the technology finds its own way into existing and new projects. 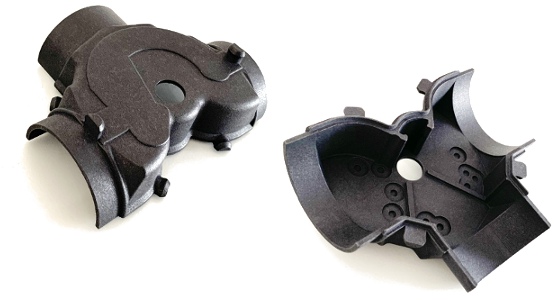 Wiesner provides an example of 3D printing's usefulness compared to alternative routes to market. "The best example is probably the notoriously complex and no-longer-available classic Porsche 911 air distribution box and its internals, which I now manufacture. The originals were made from bakelite, which became brittle over time and eventually cracked or completely broke. A good percentage of old Porsches need one or more parts from this assembly replaced. Because of its odd shape, it is expensive to manufacture using traditional methods, and FDM printing falls short for the same reason. However, it's possible on an industrial MJF or SLS machine, and I now have those parts printed by 3DPRINTUK. This is where one of AM's other strengths comes into play: I don't have to keep stock. I have these items printed on demand, as and when they are ordered."

When the demand is for SLS/MJF, Wiesner Design works with 3DPRINTUK, which has years of experience working with PBF technologies. Wiesner first worked with 3DPRINTUK at the beginning of 2021, a key stimulus being the superior user interface, an easy-to-understand and competitive pricing structure, and the production of consistently high-quality parts. I asked Wiesner by way of conclusion what he thought about 3DPRINTUK, and his views on the company from a customer perspective.

"Consistency and reliability are probably 3DPRINTUK's strongest attributes in my view," he says. If there were five things he would want someone reading this to know about them, they would be: "First, any technology has its limitations and 3DPRINTUK doesn't shy away from theirs, instead they help their customers to make the most of what the technology offers. Second, I enjoy sending designs their way knowing that they will be printed on the latest industrial machines that I don't have to own or maintain myself. Third, their user interface. Try it! Fourth, they can't perform miracles but have actually pulled it off once or twice for me. Fifth, they are a fun bunch who likes cars, technology, and printing nice stuff for people."

EDITOR'S NOTE: Wiesner Design's accurate, 3D-printed 1:4-scale model of the very first Porsche 911 engine (1965) is an incredibly interesting story on its own. You can read all about it in detail at wiesnerdesign.com/engine-art.