Industry's smallest inverter-equipped EV motor system is half the dimensions of existing systems.

Mitsubishi Electric Corporation has developed a prototype electric vehicle (EV) motor system with a built-in silicon carbide inverter. The EV motor system is the smallest of its kind, measuring just half the dimensions of Mitsubishi Electric's existing motor system that uses an external inverter, and loss is below half that of silicon-based systems, according to the company.

The new motor system is expected to enable manufacturers to develop EVs offering more passenger space and greater energy efficiency. The company plans to commercialize the motor system after finalizing other technologies for motor/inverter cooling, downsizing, and efficiency. 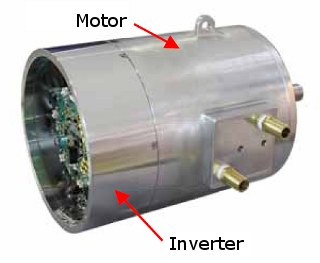 The global demand for EVs and hybrid EVs (HEVs) has been growing in recent years, reflecting increasingly strict regulation of fuel efficiency and growing public interest in saving energy resources and reducing carbon dioxide emissions. As EVs and HEVs require relatively large spaces to accommodate their robust battery systems, there is a strong need to reduce the size and weight of motor systems and other equipment to ensure sufficient room in passenger compartments.

1) Inverter-equipped design just half the dimensions of existing system
Mitsubishi Electric's existing system consists of separate motors and inverters driving the motors, which requires more space for these components and their wiring.

The newly developed, cylinder-shaped inverter matches the diameter of the motor, enabling them to be connected coaxially within a chassis, resulting in a substantial downsizing of the motor system.

2) SiC inverter loss is reduced by more than 50% compared to silicon-based systems
Silicon chips have been widely used in power devices for inverter switching. Silicon carbide, however, is now recognized as a more suitable material for chips, owing to its electrical characteristics, including a breakdown electric field that is 10 times greater compared to silicon chips. This greater breakdown electric field enables thinner chips, which reduces electrical resistance and lowers loss.

All power chips in the inverter are silicon carbide based, resulting in over 50% reduction of loss compared to the company's silicon-based inverter system.

3) Improved winding density and magnetic efficiency achieve smaller motor with higher output
The motor is a permanent-magnet motor that uses a neodymium magnet. Mitsubishi Electric's proprietary dense-winding structure enabled the company to utilize its poki-poki motor production technologies to reduce the size of the motor.

The size and configuration of the stator and rotator poles were optimized using Mitsubishi Electric's high-level magnetic-design technology. As a result, magnetic efficiency was increased and power output was improved by 5% over previous motors. Mitsubishi did not release output specs for this motor.