Converting a 1960s nuclear-proof bunker into a museum is full of challenges, one of which was to repurpose heavy nuclear-safe doors as fire doors.

Between 1963 and 1968, the Danish government secretly burrowed 197 ft into a chalk hill on the northern tip of Denmark to build a nuclear-safe bunker that would protect the government and royal family in the event of a nuclear threat. 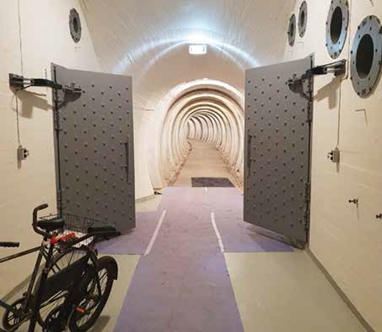 The government declassified the REGAN Vest bunker in 2003 and decided in 2014, after the space spent years in hibernation, to open the facility to the public as a museum. This presented some significant technical challenges, not the least of which was adapting the heavy entrance doors for use as fire doors. A pair of heavy-duty electric actuators from Thomson Industries came to the rescue.

Frozen in time
The 60,000-sq-ft facility was designed to support 300 people for weeks. Unlike most other declassified bunkers throughout the world, everything in the REGAN Vest facility remains intact. Ministerial offices, encryption rooms, dormitories, and doctors' examination rooms, for example, are undisturbed. Even the chambers designed for royalty have retained all original furniture and objects.

As such, the safe space presents a unique glimpse of history as well as an opportunity to educate the public about the Danish participation in the Cold War, especially during the period following the Cuban Missile Crisis in the 1960s. Making the facility safe for the public, however, required some updates, such as having functioning fire doors.

Thomson Electrak HD electric linear actuators provide load handling up to 16 kN, up to 1,000-mm stroke lengths, up to 75 mm/s of speed, and high environmental resistance, including IP69K.

Overcoming inertia
The metal entry doors were designed to withstand nuclear explosions and were more than adequate for protection, but the challenge was in moving them easily. Each entrance door weighs 3 tons and is about 4 ft wide and 7.5 ft high. Their massive size presented more inertia than traditional fire-door opening and closing technology could handle, so the museum planner reached out to automation supplier AVN Teknik A/S, the authorized distributor of Thomson in Denmark.

"If you've ever tried to move large, wooden doors in public buildings, you know how much inertia they have. Just imagine what it might take to move a solid metal door of the same size," said AVN Teknik A/S Product Specialist Flemming Blauert.

Tons of capacity
After inspecting the site, Blauert recommended implementing heavy-duty Thomson Electrak® HD electric linear actuators, which function as electrical control arms. They are anchored to the wall and attached to the doors using specially made fittings.

"The high tensile strength of the Electrak HD actuator and its robust construction make it ideal for tasks of this caliber. It can handle very powerful static loads, and both starting and braking functions. At the same time, their compressive force of up to 2 tons provides the necessary closing pressure in the event of a fire," Blauert said.

The Electrak HD actuators have onboard electronics that can eliminate the need for standalone controls. They meet the most extreme OEM component environmental acceptance tests, including IP69K. Furthermore, to ensure continuous operation, HD actuators are backed up by an uninterruptible power supply (UPS).

Opening soon
Designers are putting the finishing touches on the museum and are targeting a grand opening in February 2023. Thanks to the system design expertise of AVN Teknik A/S and the heavy-duty actuators from Thomson, REGAN Vest visitors will be able to enjoy a safe, truly in-depth and historical experience.