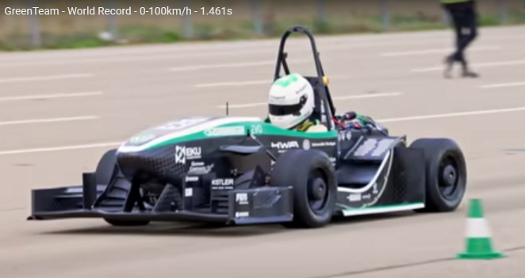 What's the fastest electric vehicle off the line ... a Tesla, a Porsche, an exotic Rimac Nevera? Nope. It's a blistering-fast self-built electric racing car designed and constructed by students from the University of Stuttgart in Germany, and it hit 0 to 100 km/h (0 to 62 mph) in 1.461 sec recently to snag the new Guinness World Record for EV acceleration.

The record was set on Friday, Sept. 23, 2022, on a racetrack at the Bosch site in Renningen in the district of BÃ¶blingen in Baden-WÃ¼rttemberg. The U. Stuttgart GreenTeam consisted of 20 students.

Technical problems thwarted the students' first attempt to break the world record in early September, but a second try weeks later was a success. Guinness World Records confirmed the new world record for the fastest accelerating electric vehicle on Oct. 6, 2022.

"We are delighted that we broke the world record and brought it back to Germany!" said Pavel Povolni, first chairman of the FÃ¶rderverein GreenTeam Uni Stuttgart e.V. The window for breaking the record this year was getting smaller and smaller because of the weather. During the afternoon of the successful run, the temperatures were already almost too cool for the racing car.

"We made the best of the situation, despite the weather. We can be proud of that," said Marius Goletz, who is responsible for the car's adjustment control.

The driver of the e-racing car, Diogo Silva, said, "It was exhausting, but a unique experience and it was definitely worth the hard work." 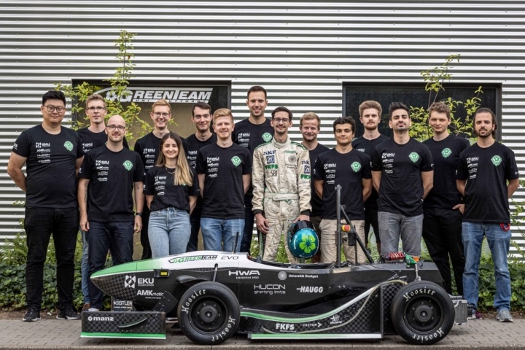 The University of Stuttgart's GreenTeam has broken the EV acceleration world record. The majority of this year's team is shown here. [Credit: Photo by Maximilian Partenfelder/GreenTeam]

The 20 members of the GreenTeam university group and the associated support association have been preparing for the world record attempt for almost a year. The young team members study a range of different subjects at the University of Stuttgart and designed and built the e-vehicle in their own workshop on Campus Vaihingen.

The carbon-fiber racing car weighs just under 145 kg (320 lb) and has a maximum output of 180 kW on the road thanks to the four-wheel drive with motors developed at the university, and a newly designed high-voltage battery pack. According to the university, due to the low vehicle weight, this corresponds to 1,750 hp per ton. The vehicle can thus achieve a peak acceleration of 2.5 g, which is roughly equivalent to the force experienced by astronauts when a rocket re-enters the Earth's atmosphere.

VIDEO: Tech specs and more: The car behind the GreenTeam's mission to break the EV acceleration world record. (Please make sure captions/subtitles are turned on.)

Although victory was sweet, there have been many challenges and failures for the project and its GreenTeam.

"We suffered a bitter setback at the end of July," said Povolni. During a test run for the world record, the vehicle broke away at high speed and crashed into a stack of tires that served as a track barrier. "Fortunately, the driver was unharmed, but the vehicle suffered enormous damage," he said. "Everything was repaired, and then came the next shock: We suffered technical problems the evening before making a new attempt at the world record. Therefore, the trial had to be postponed again at short notice by three weeks to September 23, 2022."

In 2012, the GreenTeam first broke the record with an acceleration from 0 to 100 km/h in 2.681 sec. After this record was broken by teams from the Netherlands and Switzerland, the Stuttgart team managed to break the record again in 2015, setting a new best time of 1.779 sec. In 2016, the Swiss team beat this run with a time of 1.513 sec. This has remained the record to beat ever since.

The new best time is 1.461 sec, bringing the record back to Stuttgart.

The university's GreenTeam Uni Stuttgart e.V. was founded in 2009 and has since regularly participated in the "Formula Student" international student design competition. For the competition, students independently design and build an e-racing car that is evaluated in various disciplines, such as acceleration and endurance. In total, the GreenTeam has about 70 members as well as a support association consisting of about 140 GreenTeam alumni. Of these, 20 students joined forces to break the world record.