A look back 104 years ago: Final Allied offensive of World War I decided fate of Europe

By mid-September 1918, the French and U.S. armies under the command of Gen. John J. Pershing had achieved victory in a critical campaign, driving back the Germans from the Saint-Mihiel salient.

With that area secured, about 600,000 Americans, along with some 220,000 French and Italian troops, moved 40 miles to the northwest along the bank of the Meuse River in the Meuse-Argonne region of France. 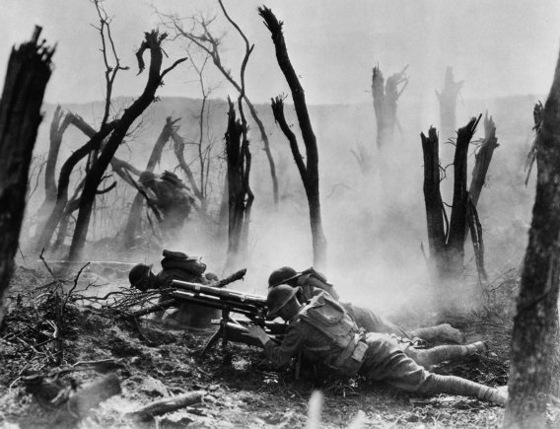 This movement of forces took about two weeks and was confined to the hours of darkness to maintain secrecy, said Brian F. Neumann, a historian who authored the Center of Military History pamphlet, "The U.S. Army in the World War I Era."

The transfer of forces took place without a serious setback, he said. This was largely attributable to the careful supervision of a young staff officer from Pershing's First Army, Col. George C. Marshall. Marshall would later become the Army's chief of staff during World War II.

That large-scale operation, known as the Meuse-Argonne Offensive, lasted right up to the armistice, Nov. 11, 1918. A total of 220 Allied divisions participated in the offensive, 42 of which belonged to the American Expeditionary Forces.

Imposing defenses
On the east side of the American sector was the unfordable Meuse River with the dense Argonne Forest on the west. The Argonne was on high ground, from which the Germans rained artillery fire on U.S. forces, Neumann said.

Since the Germans had occupied the area for several years, they had developed an elaborate defensive system of four fortified lines featuring a dense network of wire entanglements, machine-gun positions with interlocking fires, and concrete fighting positions. In between the trench lines, the Germans had developed a series of intermediate strong points in the numerous woods and knolls. The defensive system was about 15 miles deep, with five divisions on line and another seven in reserve, Neumann said.

Against this imposing defense, the American First Army's 600,000 men would attack with nine divisions on line and another five in reserve, with III Corps on the east flank, V Corps in the center, and I Corps on the west flank. A total of 2,700 pieces of artillery, 189 tanks, and 821 aircraft supported the American infantrymen, Neumann said.

Initial assault
At 5:30 a.m., Sept. 26, after a three-hour artillery bombardment, the three corps launched their attacks. Despite a heavy fog, the rugged terrain, and the network of barbed wire, the weight of the American onslaught quickly overran the Germans' forward positions. On both flanks, the corps made good progress, he said.

In the center, however, the V Corps experienced problems, but nonetheless seized their objective on the following day, he said.

Throughout the remainder of September, First Army slowly plodded forward. Heavy rains on Sept. 27 and 28 bogged down the few tanks that had not already succumbed to mechanical failure. The rains also interfered with the forward movement of the supporting artillery and the resupply efforts as the already congested roads became muddy, he noted.

Moreover, the Germans had used the delay to rush in their reserves, Neumann said. The American advance had become a continuous series of bloody, hard-fought engagements.

Fog of war
Not all of First Army's difficulties came from the enemy or the weather, Neumann said. Of the nine divisions in the initial assault, only three, the 4th, 28th, and 77th, had significant combat experience. The 79th Division, which had the critical mission to take the town of Montfaucon, had been in France for only seven weeks. The heavy fog and rain and the broken terrain exacerbated the situation for the inexperienced troops.

Many divisions suffered from a lack of coordination among their own units and liaison with adjoining and higher units, he continued. Teamwork between the Infantry and their Artillery often proved awkward and ineffective, especially in those divisions that had to rely on Artillery brigades from other divisions because their own brigades were unavailable.

Overcoming these problems, the First Army advanced eight miles into the German lines by the end of September. Remarkably, it had fought through some of the strongest positions on the Western Front and captured 9,000 prisoners and a large amount of war supplies, including 100 guns, Neumann said. With the severity of the fighting and the intermingling of units in the twisted terrain, Pershing had little choice but to pause to reorganize.

Elsewhere on the Western Front, French and British forces had also slowed and then paused to improve their interior lines of communications, Neumann said.

During the first days of October, Pershing took advantage of the pause to rotate three battle-hardened divisions, the 3rd, 32nd, and 1st, into the line, relieving some of the less experienced, the 37th, 79th and 35th. As First Army reorganized its line, the Germans also strengthened their position with six new divisions brought into the area, for a total of 11. The numerical odds were beginning to even.

At 5:30 a.m., Oct. 4, First Army renewed its attack, but progress was slow and severe, Neumann said.

As new American divisions were rotated into line, the Germans continued their reinforcement efforts as well. By Oct. 6, the Germans had 27 divisions in the area.

On Oct. 14, First Army launched a general assault all along the German lines. By the third week in October, First Army had reached most of the objectives of the first phase of the campaign: penetration of the third German line and clearing of the Argonne Forest, Neumann said.

Northern lines
With the divisions of First Army fighting in the Meuse-Argonne region, other American divisions were providing crucial assistance to the French and British advances, Neumann said. To the north, two divisions of II Corps continued to support the British advance. The 2nd Division was operating with the French Fourth Army on the First Army's western flank.

On Oct. 10, the 36th Division relieved the 2nd Division and advanced to the Aisne River by Oct. 13, which brought the French Fourth Army on line with the American First Army, Neumann said.

Decentralized command
By mid-October, Pershing realized that too much of the operational and tactical direction of the war was concentrated in his hands. As AEF commander, he was the American theater commander responsible for the administration, training, and supplying of the American troops in France, as well as coordination with the other national commanders. In addition, he was the field commander for three corps consisting of 14 divisions in a desperate fight over rough terrain.

Objectives achieved
Over the remainder of October and early November, the Americans made substantial progress, and by Nov. 4, First Army had elements along the heights overlooking the Meuse River, Neumann said. The Americans had achieved their objective.

Infantry and Artillery coordination was superb. Troops pushed through and around German strong points, while special assault troops reduced them. Improved staff work and coordination afforded First Army the flexibility to bypass German defenses. Unlike former attacks that made strong first-day gains followed by smaller ones, this attack was different. The American units had finally developed into a well-trained, well-organized fighting force, Neumann said.

The Germans had had enough. The fighting ended at the eleventh hour of Nov. 11, 1918, the time the armistice went into effect, ending the Great War.

The Meuse-Argonne Campaign was the greatest battle that the U.S. Army had fought in its history, Neumann concluded. Almost 1.25 million American troops had participated during the course of the 47-day campaign. American casualties were high -- over 117,000 -- but the results were impressive.

For example, First Army had driven 43 German divisions back about 30 miles over some of the most difficult terrain and most heavily fortified positions on the Western Front. It had inflicted over 120,000 casualties on the Germans and captured 468 guns.