Bugatti Mistral: Last to run on the W16 combustion engine 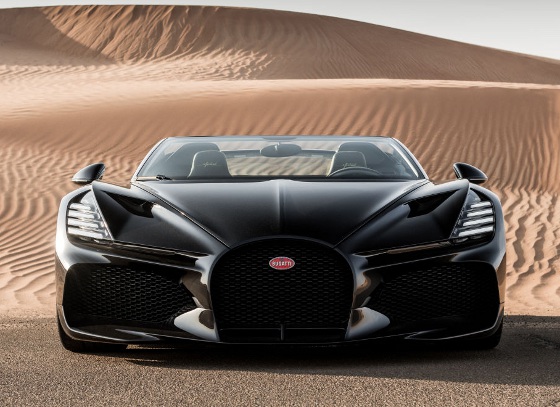 The 8.0-liter W16 engine has been propelling Bugatti's hyper sports cars for almost 20 years. It's the only 16-cylinder engine in the world to be used in a car, and now its days are officially numbered with the release of the 2024 Bugatti Mistral roadster, a 1,578-hp, 99-unit open-top that will be the last of its kind to feature the W16. The price tag is as big as the engine: $5 million.

After Mistral, all future Bugatti cars will be all electric or electric hybrids. It's the end of an era for Bugatti, both for the W16 and the combustion-engine-only supercars the brand is so well known for. 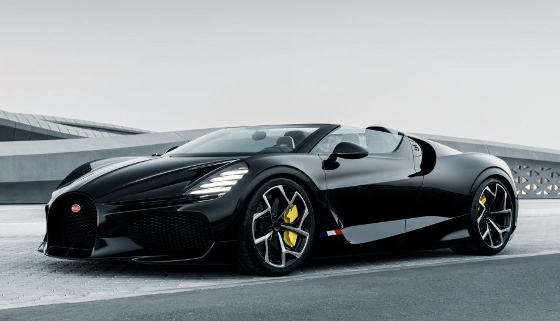 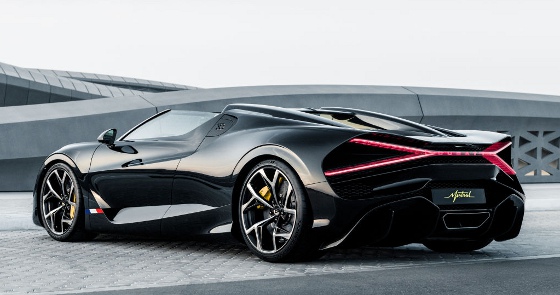 According to Emilio Scervo, Bugatti Rimac chief technology officer, "Managing both thermodynamics and aerodynamics effectively is key to achieving more than 420 km/h in an open-top car, even with 1,600 PS from perhaps the most advanced automotive engine ever created. We have to think very carefully about how we shape the W16 Mistral to guide air through the car and around the car to delicately balance both cooling and aerodynamics. But, of course, we must do all this with a sense of elegance befitting a Bugatti roadster. A car that is both designed for purpose, but simultaneously evokes a sense of timelessness."

At the front of W16 Mistral, a new wider, deeper, and more 3D iteration of the famous Bugatti horseshoe grille allows the high-temperature engine radiator to be fully fed purely from one intake, leaving the two side intakes to focus only on providing air to the intercoolers. 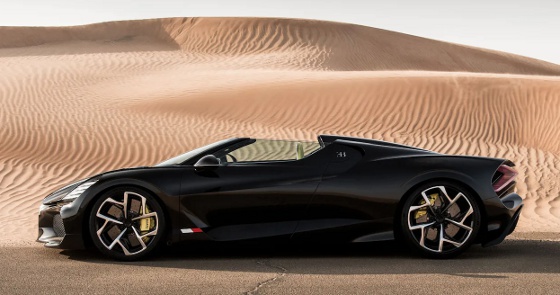 The Mistral borrows heavily from the Bugatti Chiron but also sports design touches from the limited-edition Divo, Centodieci, La Voiture Noire, and other super-rare models. However, it definitely holds its own as a unique design in total.

The front of the two-seater, mid-engine hyper car is dominated by two air intakes -- one by the wheel and one seamlessly integrated within a new three-dimensional headlamp design. The air is guided from an area of high pressure to a low-pressure area in the wheel well, which would otherwise create turbulence and drag. 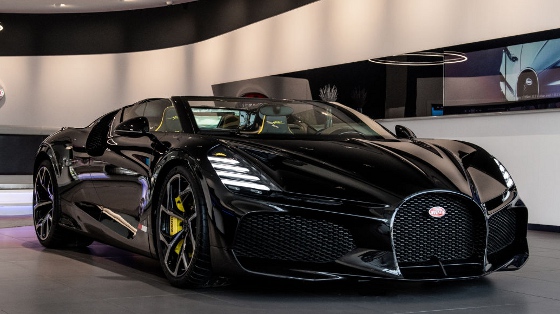 The windscreen wraps around like an elegant visor, and the front becomes more vertical to create a design that is both shaped for speed and beauty at the same time. The car was made for open-top driving and does not have a permanent roof, but according to Car and Driver, "The car will be offered with a temporary clip-in panel rather than a full top." 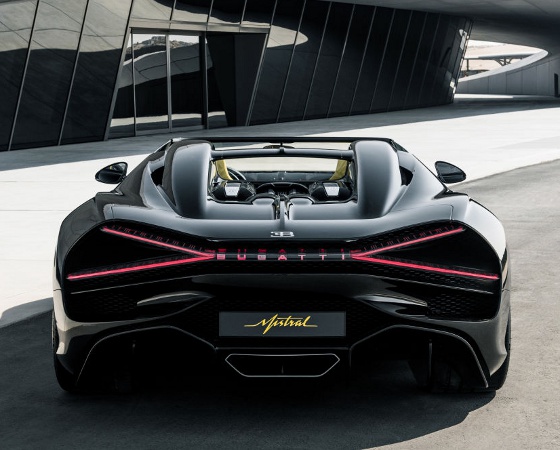 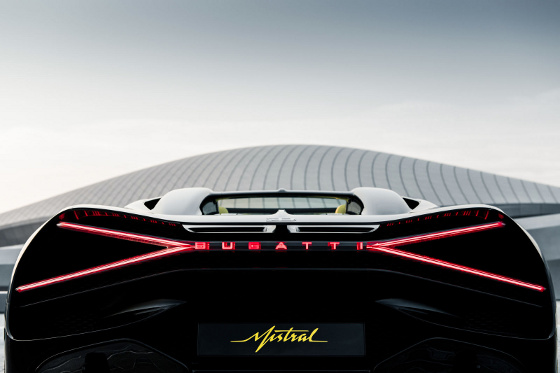 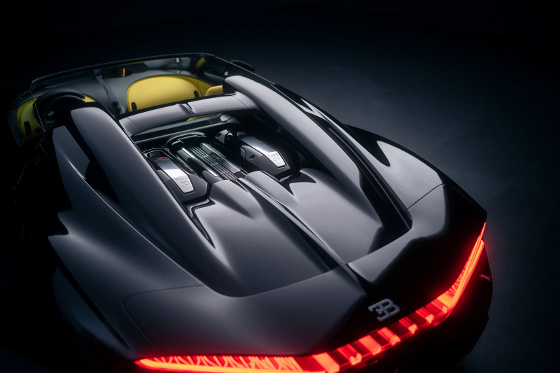 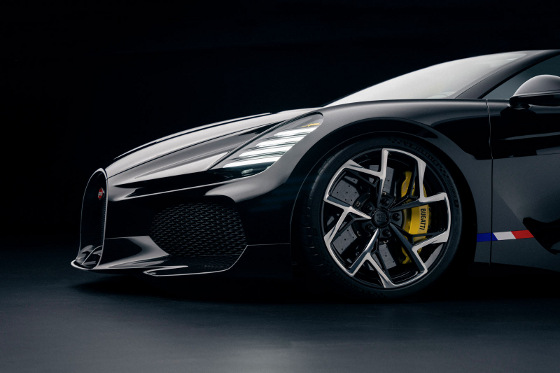 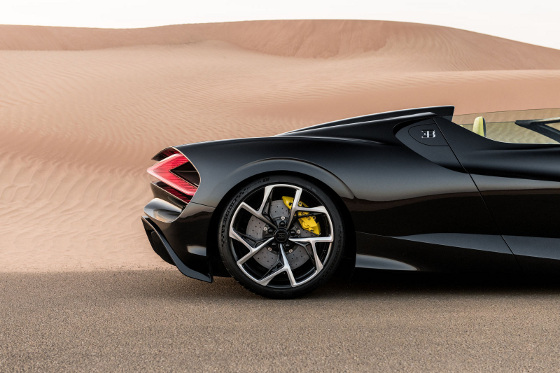 "To get it right we needed to separate the air intake for the engine from the air intake for the oil cooler," says Achim Anscheidt, Bugatti Rimac design director. "If we kept them together, the intake on each side of the car would have had to have been enlarged out of proportion. So, instead, we hark back to the Veyron 16.4 Vitesse and the Type 57 Roadster Grand Raid by incorporating engine air intakes behind the occupant headrests. This solution is both elegant, functional, and safe -- the svelte side intakes are proportionally perfect and feed air purely to the oil coolers, while the headrest engine intakes create a huge sense of aural drama, while also working to protect occupants in the event of a rollover." 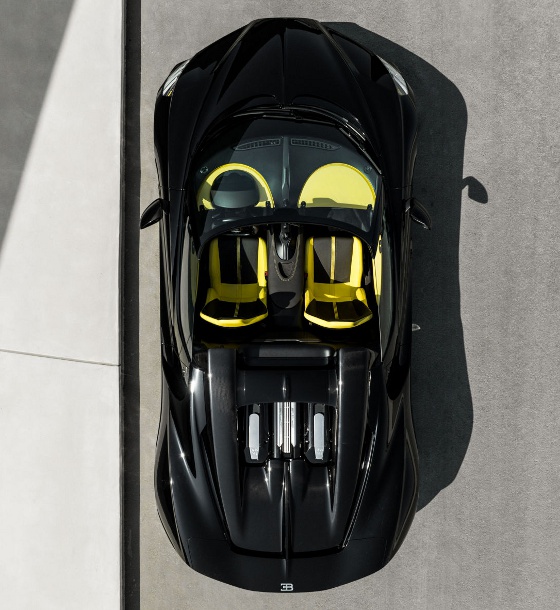 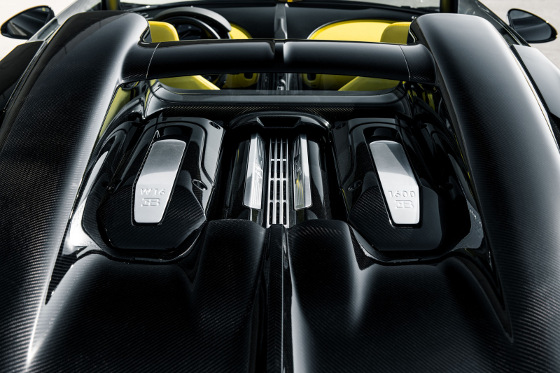 All air taken through the sides gets channeled across the two radiators (one on each side) over the rear wheels and then out through the W16 Mistral's X-shaped taillights, which is a reinvention of the Bolide's iconic design. The vents emerge in the triangular negative space between the X beams of the rear light, creating a pressure drop between the side intakes and the outlets at the back of the W16 Mistral that helps to manage the temperature of the engine, even under high loads.

Once its four turbochargers are fully engaged, top speed is 260 mph. According to Scervo, "The aero map of the W16 Mistral has been carefully defined. Through the synthesis of engineering prowess and design talent, W16 Mistral achieves a delicate balance of drag reduction and downforce through its carefully designed front splitter, aerodynamic underbody, and the high-energy air flow around the airfoil-shaped rear wing when deployed."

The rear diffuser edge has been elevated to increase its rake angle and expansion ratio, helping to maintain both the Mistral's sure-footed handling and its high-speed capabilities.

Inside, Mistral borrows heavily from the Chiron. 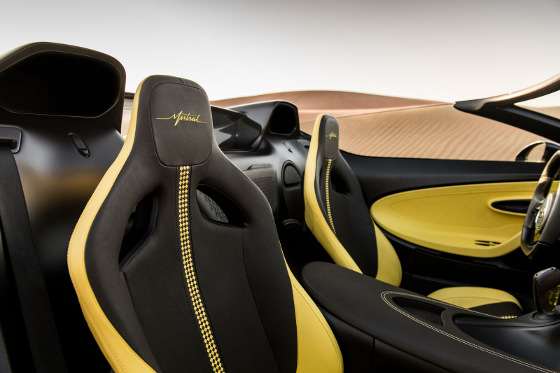 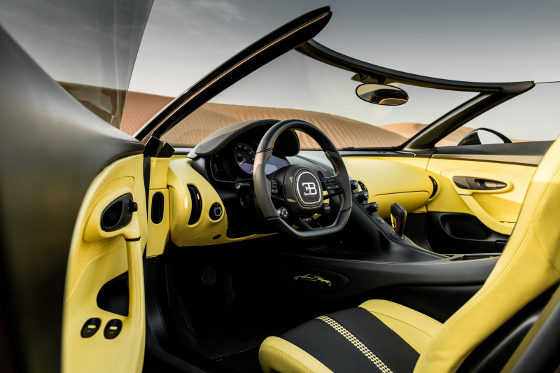 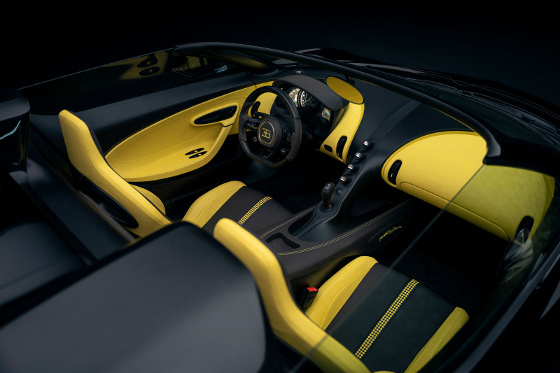 According to the company, in 1997, engineer Ferdinand Karl Piech, chairman of the board of Management of Volkswagen AG at the time, presented VW's Head of Engine Development Karl-Heinz Neumann with the initial idea to bring back a really big engine, drawing a design on an envelope while traveling on the Shinkansen high-speed train from Tokyo to Osaka. His idea was an engine with 18 cylinders, but it would subsequently be modified to become the W16 we know today -- a fitting homage to the 16-cylinder engine developed by Ettore Bugatti himself. 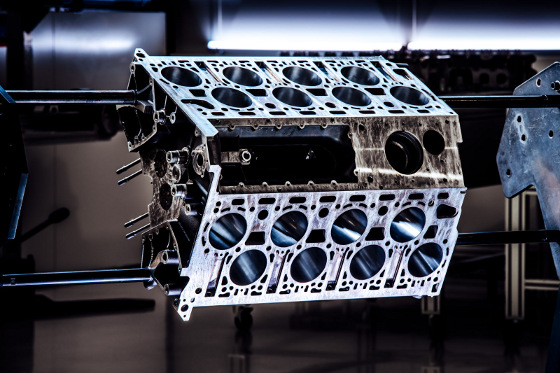 W16 engine assembly is done by hand in a special facility at the Volkswagen engine plant in Salzgitter, Germany, and the cars are fully assembled in Molsheim. [Images credit W16 engine section: Courtesy Bugatti/Â© BENJAMIN A. MONN]

Gregor Gries, who was one of the first Bugatti employees during its rebirth 20 years ago and, until February 2022, was the company's head of technical development, says, "At the time, no one really believed there could be a vehicle for the road that boasted 1,000 PS. We wanted to prove we could construct an engine that was not only powerful, but also manageable."

The engineers took Piech's sketch and evolved it into a production reality. No bigger than a V12 and weighing around 880 lb, the engine has the unique arrangement of cylinders in a W configuration to thank for its compact size. Two eight-cylinder blocks are set at an angle of 90 degrees to one another, boosted by four exhaust gas turbochargers.

Bringing the engine to life required more than 3,500 individual parts, each assembled by hand, and the work monitored throughout by test computers. On its first-ever test in 2001, the double biturbo engine achieved the required 1,000+1 PS right off the bat.

There were also new requirements not previously asked of a production vehicle, such as the fact the very hot exhaust gas needed to be channeled. A titanium exhaust system on a scale not previously seen in the automotive sector was ultimately part of the solution.

When Bugatti published the first technical details about the 16-cylinder engine being reborn in a new iteration for the Veyron 16.4 in 2005, it was big news in the super-car world. Never before had a production vehicle featured an engine that was so powerful, yet so compact and able to cruise as easily as it could obliterate acceleration records. Its power output was unparalleled at the time; acceleration from 0 to 100 km/h in just 2.5 sec and a top speed of over 250 mph.

When the Veyron 16.4 went into production, it marked a pioneering achievement for Bugatti and established an entirely new class of car in the process -- the Veyron was the world's first hyper sports car. 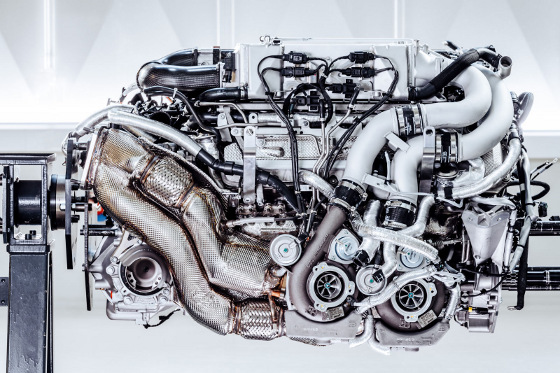 Bugatti unveiled Veyron's successor, the Chiron, in March 2016, which once again pumped up the amount of power available in a road car. It was an 8.0-liter W16 with four turbochargers, just like Veyron, but it achieved new levels of performance after engineers looked at every single component afresh. Most importantly, larger turbochargers and a duplex fuel injection system with 32 injection valves was fitted, with a greater use of carbon and titanium to help offset increases in weight. With its power output of 1,479 hp (1,500 PS) initially, subsequently increased to 1,578 hp (1,600 PS), and maximum torque of 1,600 Nm, the W16 engine changed the course of performance car history yet again.

The sound of the engine is as unique as the engine itself. Thanks to an entirely stand-alone, asymmetric firing order with firing gaps of just 45 degrees, its sound is unlike any other engine concept. Balanced and comfortable in the lower load range, it increasingly becomes a growling beast as the load increases.

Bugatti engineers have continued to optimize the engine over the years. With enlarged turbochargers and many other modifications, the W16 delivered 1,184 hp (1,200 PS) in the Veyron 16.4 Super Sport from 2010. That same year, the Super Sport set a speed record of 267.8 mph as the fastest road-legal production super sports car. 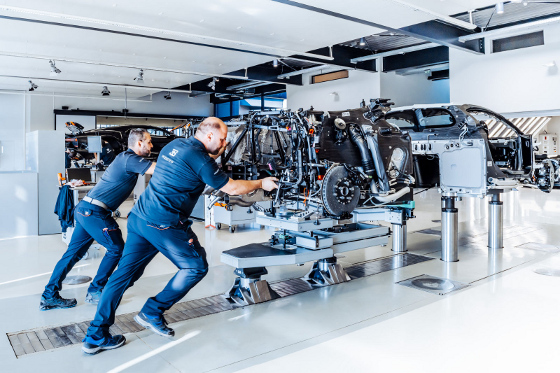 With the Chiron, the engineers faced the challenge of developing a sophisticated but even more luxurious and more powerful successor model. They wanted to make the W16 more powerful, quieter, and more cultivated. The only aspects the engineers kept were the compact engine shape and the pitch of 73 mm -- everything else was developed anew. This effort achieved a 50% increase in power over the original basic engine development of the Veyron 16.4 and an approximately 24% increase over the Veyron 16.4 Super Sport. Much of the engine's new performance comes from the exhaust gas turbochargers with special, new sequential turbocharging. Only when all four turbochargers -- two on each bank of cylinders -- are in use does the engine achieve its maximum power output.

The prototype Chiron engine ran for over 16,000 hours during development. In addition, more than 500,000 test kilometers were completed in the vehicle in order for the engine to live up to Bugatti's demanding quality standards. The engine is manufactured at the Volkswagen engine plant in Salzgitter, Germany, in a separate room reserved exclusively for building the W16 engine. It takes two experts six days to manually assemble the engine's 3,712 individual parts.

Mistral uses the W16 engine designed for the Chiron. It will be the last Bugatti to run on the W16 and on a purely combustion-based powerplant.