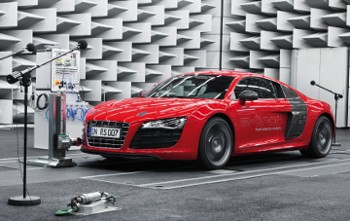 The Audi R8 e-tron on the acoustic test bed.

Audi's future e-tron models will cover long distances powered by practically silent electric motors. To ensure that pedestrians in urban settings will hear them, the brand has developed a synthetic solution: Audi e-sound.

Rudolf Halbmeir's workstation is not exactly typical of an Audi engineer. There is a digital piano on his desk, two studio-quality loudspeakers next to his computer monitor, and a pile of music magazines off to the side. "A car's sound," says Halbmeir, an acoustics engineer, "is similar to music."

Sound is an especially exciting aspect of a vehicle. Although it can be described in physical terms, there is no substitute for experiencing it firsthand. A car's sound is emotional, not intellectual. Although we consciously register a car's sounds only occasionally while on the road, they are always there  playing a crucial role in the driving experience. Sounds send signals. Low-range frequencies suggest power and composure, while mid-range frequencies emit sportiness and agility.

All Audi models produce sound signatures that are not only well-rounded and harmonious, but also broadcast performance, premium quality, and respectability. "Good sound design is a complex endeavor," explains Dr. Ralf Kunkel, head of Acoustics at Audi. "We have gathered a lot of expertise over the years. We have also learned how to amplify pleasant frequencies and to suppress unpleasant noises."

In a series-production Audi, a combustion engine currently supplies the music. Conversely, the motor in an electric-powered e-tron is not an option, as it is too quiet and its high frequencies are not exactly melodious. Audi's e-tron models will therefore feature a synthetic sound signature. Halbmeir teamed up with his colleagues Axel Brombach and Dr. Lars Hinrichsen to create it.

They used computers to do most of the work, using software to mix and listen to tones, assess, and then re-mix. Halbmeir is truly enthusiastic about the creative process. After all, in his spare time, he writes songs and composes music in his own recording studio  where he himself plays a lot of instruments. "I create one- of-a-kind emotional sound structures," says Halbmeir. "There aren't many differences between music and a vehicle's sound. I trust my instincts and have to try out new ideas to determine where they will take me." 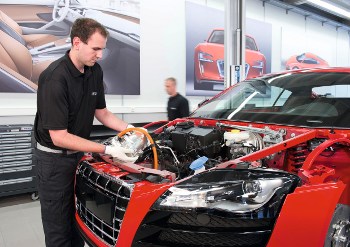 Which ideas, exactly? "Some science-fiction films provided inspiration suitable for certain frequency ranges," says Halbmeir. "But there was nothing in the real world which offered quite the right sound. When you compose music or sounds, you have to be true to your convictions. The moment you cut corners, you essentially end up with elevator music." Dr. Kunkel adds: "Because we here at Audi are all automotive experts, we have a great advantage over sound specialists elsewhere. We know our vehicles inside and out, not to mention how they operate and behave."

The e-sound by Audi may be artificial, but it is authentic. In fact, the e-tron itself generates its sound by the millisecond. Dr. Hinrichsen, the expert for hardware and software, explains: "Data relating to the electric motor's rotational speed, vehicle speed, loads, and other parameters is continuously supplied by the vehicle to the control unit. It then uses this data to generate sound."

The e-sound is played via a sturdy loudspeaker attached to the car's undercarriage. Brombach, the specialist in this field, shares details: "We designed it to handle as much as 40 watts, but during normal operation it ranges between five and eight watts. That's loud enough for nearby pedestrians and cyclists to hear the e-tron." A fraction of the sound signature enters the vehicle's interior via airborne and structure-borne sound waves. "We could utilize sound paths and mechanical actuators for more sound in the interior," explains Dr. Kunkel. "After all, a vehicle body is basically a large soundboard. But we believe strongly that our e-tron models call for an atmosphere of calm, which best conveys the unique experience of electric driving."

Key measurements: The acoustic test bed
The acoustic test bed at Audi HQ in Ingolstadt, Germany, is a large room on the building's ground floor, spanning some 350 m2, with a 7-m ceiling. Dense rows of wedges full of glass wool, each a meter in length, project from the walls. These wedges absorb a majority of any sound energy; things sound almost like they do outdoors. In the middle of the room is a dynamometer test bed, between two long rows of microphones atop tripods. The dynamometer serves primarily to measure noise as if the vehicle were driving by, with tires on the roller and the microphones gathering acoustic data.

Halbmeir and his colleagues used the acoustic test bed to achieve many key advancements for the R8 e-tron prototype, which features e-sound technology. All the while, they had to remain aware of regulatory developments. Dating back to early 2011, guidelines are being crafted in the United States regarding the volume of alerts emitted by electric vehicles. "We'll probably have to ensure audible alerts only up to 30 km/h; above that speed, the tires generate enough noise," says Dr. Kunkel. "But that isn't quite satisfactory  we'll surely increase the upper limit for alerts."

"The test bed was a key development tool for us," says Brombach. "It did not, however, allow us to genuinely evaluate the e-sound. We were missing everyday conditions such as motion, wind, and other vehicles. So we then drove on actual roads. Listening, seeing, feeling: They all go together."

Out of the building and to the street. A red Audi R8 e-tron pulls up around the corner, purring gently. But when Halbmeir taps the gas pedal, the purr turns into a cultivated growl. Though not unlike an elegant V8, it is especially pure and nuanced, and is shrouded in bright and innovative overtones. The Audi R8 e-tron certainly sounds like a sports car, but also a one of a kind and very futuristic. Halbmeir stops the car and inquires with a grin: "Great, isn't it?"

And e-sound for this electric-powered high-performance sports car is just the beginning. Each and every Audi e-tron model will have a sound signature all its own  similar, yes, but each one unique. Because an Audi's sound is not just any music: it is Vorsprung durch Technik to one's ears.