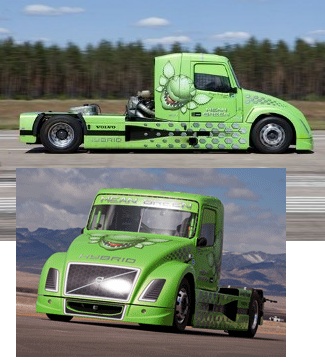 In building the Mean Green, Volvo's team of hybrid technology experts adapted Volvo's hybrid driveline to the chassis requirements of a world-class truck built for speed. Engineers then outfitted Mean Green with a highly tuned Volvo D16 engine and a modified version of Volvo's automated I-Shift gearbox, which interacts with the hybrid's electric motor.

"The result is a lightning-speed boost from start-off without any of the customary diesel-engine delay," said Boije Ovebrink, Mean Green's owner and driver. "It's like a champagne cork, but without the sound effects. For the first couple of seconds the truck just makes a slight whistle until the diesel engine, which runs on renewable liquid rosin diesel, starts delivering with explosive force."

"We are very pleased with Mean Green's performance, especially at such a high altitude," said Ovebrink. "We knew Wendover would present challenges, because it's more than 4,200 feet (1,280 meters) above sea level. To compensate for the thinner air and help prevent overheating, we reduced the truck's power by nearly 20 percent. Even with the reduction in total output potential, Mean Green had ample power to surpass the previous records."

The speed record attempts were sanctioned by the United States Auto Club, an extension of the Federation Internationale de l'Automobile (FIA), motoring's international governing body. The new world records are subject to FIA recognition, which will occur in about 30 to 60 days.