New Energy reported recently that the collaboration has successfully collected and transported electricity using a virtually invisible conductive wiring system developed for SolarWindow, New Energy's branded name for the product. The ability to transport electricity on glass windows while remaining see-through is especially important to the eventual deployment of an aesthetically pleasing commercial product.

Currently under ongoing development, the conductive system's ultra-fine grid-like pattern is deposited on to SolarWindow and is rendered virtually invisible when viewing objects through New Energy's electricity-generating glass. Researchers anticipate that a fully functional system could help transport the electricity generated on glass surfaces, improving power, efficiency, and overall performance of the SolarWindow. 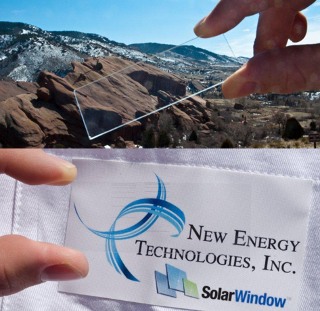 NREL is among the world's most respected and advanced solar-photovoltaic research institutions, and over its 35-year history has been credited for ground-floor support of many of the commercial technologies employed by today's renewable energy industries. NREL and New Energy have been working through a cooperative research and development agreement to advance the SolarWindow technology for generating electricity on glass windows.

"It's very exciting that we've not only achieved an important milestone with respect to the size of our SolarWindow, but we are now able to confidently tackle two of the most important factors to eventual commercialization  the structure and transparency of the wiring system which transports the electricity generated on see-through glass, and overall performance," said John A. Conklin, president and CEO of New Energy Technologies.

The prospect of generating electricity on SolarWindow is made possible when researchers creatively layer and arrange unique, ultra-small see-through solar cells onto glass. Each of these cells is arranged in a network and interconnected by way of the 'invisible' grid-like wiring system. Until now, such systems used in early SolarWindow prototypes were relatively thick and bulky, and applied to glass in ways that obstructed light, prevented the absorbance of light energy necessary to produce electricity, and significantly reduced transparency.

The 'invisible' wiring system is especially important to the ongoing development of SolarWindow, most notably allowing for more efficient collection and transport of electrons, both important for improving circuit current and overall efficiency. The system helps mitigate electrical "road-blocks," which restrict the flow of electrons with regions of high resistance, by creating a kind of low-resistance "highway" for electron transport; without the benefit of a conductive grid system, resistive losses can significantly reduce power production. A fully functional and optimized system could improve the reliability of SolarWindow by providing a stable network of connections among each of the interconnected solar cells on the see-through glass.

Researchers developing New Energy's SolarWindow technology have achieved significant improvements to the transparency of their newly unveiled grid-like system since unveiling the company's first-generation working prototype to a standing-room crowd of mainstream media, investors, academics, and commercial glass companies over one year ago.

Scientists demonstrated numerous features of New Energy's SolarWindow, including its ability to remain see-through while generating electricity. Both natural and artificial light were used in demonstrations.

At the demonstration event, scientists powered lights on a scale-model house by exposing New Energy's see-through SolarWindow to artificial light from fluorescent lamps, mimicking lighting typically installed inside offices. In artificial light, SolarWindow technology outperforms today's commercial solar and thin-films by as much as 10-fold under low-intensity irradiance.

Researchers then repeatedly opened and closed the boardroom's window shades, successfully powering LED lights each time SolarWindow was exposed to natural light. This demonstration mimicked outdoor exposure such as sunlight on the exterior face of commercial buildings, which are New Energy's initial target market and a promising early application of its technology.

Importantly, scientists at the event demonstrated SolarWindow's ability to generate voltage and current necessary to power lighting and mechanical devices and appliances. In addition to lighting, scientists successfully powered the mechanical rotor blades of a small helicopter using only a single, small-scale SolarWindow prototype during their public demonstration.