In a bid to further increase the fuel efficiency of vehicles with stop/start systems, DENSO Corporation has developed a new lithium-ion battery pack. The battery pack allows the stop/start system to use more regenerative power than current conventional systems that use a single lead-acid battery. DENSO's battery pack consists of a battery management unit and power supply control switch, as well as battery cells that are provided by a third-party source. 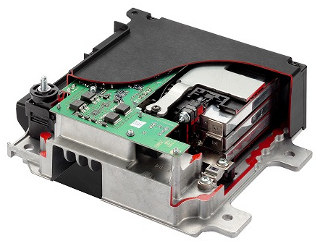 The new pack stores regenerated power and then supplies the stored regenerated power to the electrical and electronic components, such as the car navigation and audio systems. This reduces the power generation required by the alternator, which results in an overall load reduction on the engine and improves the vehicle's fuel economy.

The battery pack is naturally air-cooled and therefore does not require a dedicated battery cooling system. Because there is no need for auxiliary cooling components, this allows the battery to be lighter and more compact. This enables automakers more design flexibility, which is important for vehicles with limited space.

DENSO supplies the lithium ion battery pack, the TS starter, and Cold Storage Evaporator on the Suzuki Wagon R, which Suzuki Motor Corporation launched in the Japanese market earlier this month. DENSO will continue its efforts to expand these technologies to other automakers and other regions in the world.