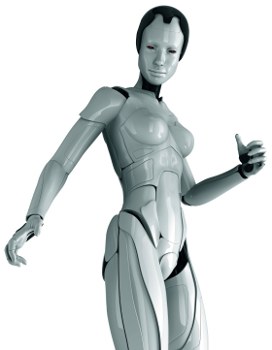 For a long time, people have dreamed of creating artificial human beings. Nowadays, modern technology is capable of realizing that dream in the form of the humanoid robot. Even if there is still a considerable amount of development work necessary, every project has to take those first steps.

As an initial stage in this process, a humanoid service robot that works autonomously already offers a wide range of benefits. Apart from the interaction of the many components used, the main challenge is the power supply and the space required for the various parts. Microdrives represent an ideal solution for resolving these two key issues. Their considerable power density, combined with high efficiency and minimal space requirement, improve the power-to-weight ratio and allow the robot to operate for long periods without having to recharge batteries.

The more human-like a robot is, the more sophisticated the mechatronic engineering input necessary. Particularly in sectors requiring "human social behaviors" (e.g., for service functions or providing information in places such as museums, airports, or hospitals), sophisticated technology for robot construction is a must.

For many years, the Barcelona-based company Pal Robotics S.L. has been working on the construction of humanoid robots for special applications. Non-verbal communication (body language) also plays an important role in increasing the acceptance of humanoid robots. In order to accommodate as many functions as possible in the predefined robot body, the robotics experts have been working with Germany-based microdrive specialist FAULHABER. The outcome has been a robot model that most definitely exhibits human traits and is capable of emphasizing certain statements by means of "body language."

Service robots for practical applications
Humanoid robots intended to perform everyday functions have to satisfy certain conditions. The developers wanted to integrate capabilities such as information output, minor transport tasks, and service functions into their new REEM robots. This resulted in a robot height of 1.65 m (5.24 ft), so that it can communicate with humans at eye level. It was also important that the robot should not be excessively heavy, although there was a need for a low center of gravity and space to house the necessary batteries.

The current robot model weighs around 90 kg (198 lb), sufficient for one set of batteries that provide 8 hr of autonomous operation. In addition to its unladen weight, this service robot can also carry up to 30 kg (66 lb) effective load on its lower loading platform. Each arm can move up to 3 kg (6.6 lb) independently. In this case, wheels located in the base of the robot ensure effective locomotion. On the one hand, this ensures minimal power consumption and quiet running. On the other hand, the design provides sufficient mobility for the planned application of up to 4 km/h (1.86 mph). As well as a touch screen for the various programmable applications, the REEM is also equipped with a microphone, stereo camera, laser and ultrasound sensors, accelerometers, and gyroscopes. These devices enable the robot to identify its current position in the room, move around autonomously in its area of work, and avoid sudden obstacles or people walking across its path.

Two DC microdrives in the robot's neck and waist provide the necessary expressiveness. Thanks to their compact dimensions, the drives can be readily used even in these two "constricted" areas. The small actuators can move head and torso independently of one another and allow them to assume different postures. This enables the robot to imitate human traits using body language suited to its respective situation.

Microdrives offer flexibility
Microdrives do not just replicate larger motors. Because of the physics involved, they often offer better dynamics, higher output, or greater efficiency than you would expect as a result of a mere reduction in size. In practice, this means that very high short-term overload capabilities are possible without affecting service life. This trait proves particularly advantageous when it comes to executing the less frequent but temporary actions necessary to mimic specific gestures. The various models of microdrives come with further benefits, depending on the application at hand:

Intelligent motion controllers can control the drive in four-quadrant operation and reduce the load on the robot controller. By means of different gearmotor combinations, all miniature devices can be set to an application-specific speed or the required output torque.

Video caption: The iCub is a humanoid robot developed at the Istituto Italiano di Tecnologia(IIT) as part of the EU project RobotCub. This robotic platform has been adopted by more than 20 laboratories worldwide. It has 53 motors that move the head, arms and hands, waist, and legs. 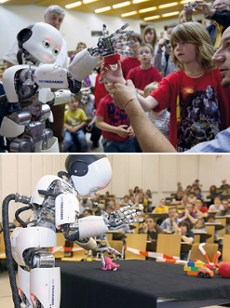 The fact that micromotors have, for a long time, already been in use in "robotized" aids such as motor-powered hand and leg prostheses shows that they meet the most stringent requirements -- not just for human robotics.

The applications for modern microdrives vary widely, with a wide range of designs available depending on application. However, a universal microdrive solution has yet to be created. This is where the system concept comes into play. It is the extensive range of accessories, from control modules such as motion controllers, encoders, bus connections, various gear heads, and ultimately the adapted, flexible control electronics, that make microdrives the ideal mechanical "muscle" in robot manufacture. 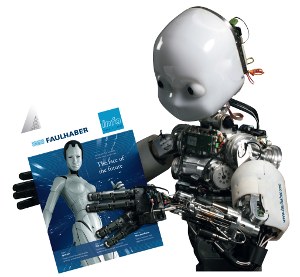