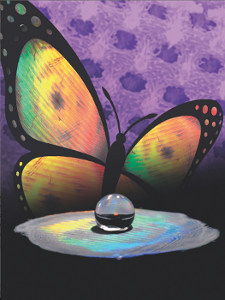 A group of researchers at Penn's School of Engineering has a new way of combining the structural color and superhydrophobicity found in butterfly wings.[Credit: AFM]

The colors of a butterfly's wings are unusually bright and beautiful and are the result of an unusual trait; the way they reflect light is fundamentally different from how color works most of the time.

A team of researchers at the University of Pennsylvania has found a way to generate this kind of "structural color" that has the added benefit of another trait of butterfly wings: super-hydrophobicity, or the ability to strongly repel water.

The research was led by Shu Yang, associate professor in the Department of Materials Science and Engineering at Penn's School of Engineering and Applied Science, and included other members of her group: Jie Li, Guanquan Liang and Xuelian Zhu.

Their research was published in the journal Advanced Functional Materials.

"A lot of research over the last 10 years has gone into trying to create structural colors like those found in nature, in things like butterfly wings and opals," Yang said." People have also been interested in creating superhydrophobic surfaces which is found in things like lotus leaves, and in butterfly wings, too, since they couldn't stay in air with raindrops clinging to them."

When light strikes the surface of a periodic lattice, the surface's scattered, interfered, or diffracted at a wavelength comparable to the lattice size, producing a particularly bright and intense color that is much stronger than color obtained from pigments or dyes.

When water lands on a hydrophobic surface, its roughness reduces the effective contact area between water and a solid area where it can adhere, resulting in an increase of water contact angle and water droplet mobility on such surface. 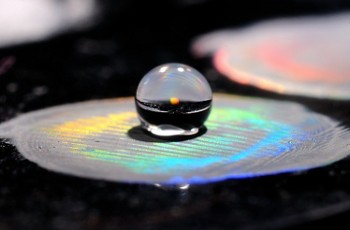 A drop of water sits on a material with structural color and superhydrophobicity. [Credit: AFM]

While trying to combine these traits, engineers have to go through complicated, multi-step processes, first to create color-providing 3D structures out of a polymer, followed by additional steps to make them rough in the nanoscale. These secondary steps, such as nanoparticle assembly, or plasma etching, must be performed very carefully as to not vary the optical property determined by the 3D periodic lattice created in the first step.

Yang's method begins with a non-conventional photolithography technique, holographic lithography, where a laser creates a cross-linked 3D network from a material called a photoresist. The photoresist material in the regions that are not exposed to the laser light are later removed by a solvent, leaving the "holes" in the 3D lattice that provides structural color.

Instead of using nanoparticles or plasma etching, Yang's team was able to add the desired nano-roughness to the structures by simply changing solvents after washing away the photoresist. The trick was to use a poor solvent; the better a solvent is, the more it tries to maximize the contact with the material. Bad solvents have the opposite effect, which the team used to its advantage at the end of the photolithography step.

"The good solvent causes the structure to swell," Yang said. "Once it has swollen, we put in the poor solvent. Because the polymer hates the poor solvent, it crunches in and shrivels, forming nanospheres within the 3D lattice.

"We found that the worse the solvent we used, the more rough we could make the structures," Yang said.

Both superhydrophobicity and structural color are in high demand for a variety of applications. Materials with structural color could be used as light-based analogs of semiconductors, for example, for light guiding, lasing, and sensing. As they repel liquids, superhydrophobic coatings are self-cleaning and waterproof. Since optical devices are highly dependent on their degree of light transmission, the ability to maintain the device surface's dryness and cleanliness will minimize the energy consumption and negative environmental impact without the use of intensive labors and chemicals. Yang has recently received a grant to develop such coatings for solar panels.

The researchers have ideas for how the two traits could be combined in one application, as well.

"Specifically, we're interested in putting this kind of material on the outside of buildings," Yang said. "The structural color we can produce is bright and highly decorative, and it won't fade away like conventional pigmentation color dies. The introduction of nano-roughness will offer additional benefits, such as energy efficiency and environmental friendliness.

"It could be a high-end facade for the aesthetics alone, in addition to the appeal of its self-cleaning properties. We are also developing energy-efficient building skins that will integrate such materials in optical sensors."

The research was supported by the Office of Naval Research and the National Science Foundation.