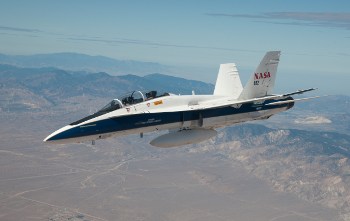 NASA's F/A-18B mission support aircraft 852 is pictured flying over the high desert near the Tehachapi Mountains northwest of Mojave, CA. The aircraft is flying a series of low-supersonic, high-altitude flight profiles during the Farfield Investigation of No Boom Threshold, or FaINT, flight research project at NASA Dryden. [Photo credit: NASA/Jim Ross]

NASA's Supersonics Project embarked on its latest effort to soften sonic booms when a NASA F/A-18 aircraft took to the air in a project called Farfield Investigation of No Boom Threshold, or FaINT, that began in late October.

As the latest in a continuing progression of NASA supersonics research projects aimed at reducing or mitigating the effect of sonic booms, FaINT is designed to enable engineers to better understand evanescent waves, an acoustic phenomenon that occurs at the very edges or just outside of the normal sonic boom envelope.

For an aircraft flying at a supersonic speed of about Mach 1.2 or less at an altitude above 35,000 ft, the shockwaves being produced typically do not reach the ground, so no sonic boom is heard. This is because shockwaves from an aircraft flying supersonically at higher altitudes are refracted, or bent upwards, as they enter warmer air closer to the ground, due to the fact that the speed of sound increases with air temperature.

But when sonic booms curve upward, they create a series of sonic boom waves that are focused along a line. This line is called a caustic line. The side of the caustic line opposite of the sonic boom waves is called the "shadow side," where the evanescent waves are generated. This is the area that NASA researchers are studying during FaINT. 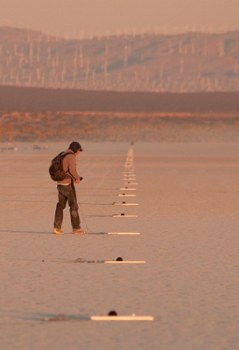 A FaINT project researcher adjusts one of the microphones in a linear array nearly 1.5 miles long laid out by the project team to record and measure sonic booms. [Image credit: NASA/Tom Tschida]

"It's exciting to help lead a new area in sonic boom flight research," says Larry Cliatt, principal investigator for the FaINT flight project at NASA's Dryden Flight Research Center. "We are investigating supersonic technology and research that is relatively raw in the modern sense. When overland supersonic commercial travel is commonplace, it will be efforts like this that helped get us there."

All planned evanescent wave flights are occurring over Edwards Air Force Base in California, where special microphone arrays placed on the southern portion of Rogers Dry Lake will again be the NASA Dryden researcher's sensor of choice.

For the FaINT flight project, capturing the fleeting sounds of evanescent waves coming off sonic boom shockwaves are a challenge. Similar to the shadow the sun creates behind a building, if some light were to still leak around the edges it would not get completely dark, but it would get darker the further you move away from the edge. Certain conditions and refractions create a similar "shadow side" of a sonic boom where evanescent waves are generated, sounding similar to distant thunder. These waves quickly fade and disappear because supersonic shockwaves act similar to boat wakes on water, decreasing with distance.

"The FaINT team has been working hard on the development and design of the FaINTproject for the last six months," says Brett Pauer, FaINT deputy project manager at NASA Dryden. "NASA, along with our seven industry and university partners, is ready to collect data and expand our collective knowledge of sonic boom propagation effects near the shadow side of them."

Characterizing the effects of both normal and loud sonic booms in order to provide the data necessary for engineers to design future low-boom supersonic aircraft has required an amazing amount of work and tenacity by NASA engineers from the agency's Dryden and Langley research centers, and industry partners as well. 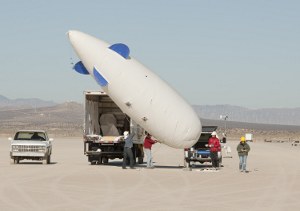 Cessna researchers prepare to launch a blimp that carries several microphones used to record sonic booms for the FaINT project. The tethered blimp flies at an altitude of about 3,000 ft above ground to collect sonic boom data at that altitude. [Image credit: NASA/Tom Tschida]

Related sonic boom research projects preceding FaINT date back several years. Recent efforts include the Superboom Caustic Analysis and Measurement Program (SCAMP), which produced and measured amped-up, super-loud sonic booms, and the Waveforms and Sonic boom Perception and Response (WSPR) project, which gathered data from a select group of volunteer Edwards Air Force Base residents on their individual perceptions of sonic booms produced by aircraft in supersonic flight over Edwards.

The overarching goal of NASA's sonic boom reduction research is to shrink the sonic boom "footprint" in order to make commercial supersonic flight over land practical. This research is funded by NASA's Aeronautics Research Mission Directorate at NASA Headquarters in Washington, DC.

Editor's note: Another good read is, "Sonic boom heads for a thump," which addresses commercial airliner development at NASA/Dryden.