The integration of the two technologies eliminates the need for a separate electronic control unit in the system network, as the EPB control functions are performed within the upgraded ESC electro-hydraulic control unit. 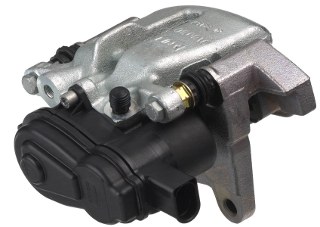 The EPBi system, as with TRW's production EPB system, helps to enhance driving safety and comfort, as well as providing greater freedom in interior design and packaging. EPB and EPBi include additional functions such as drive-away assist, automatic hill hold, and electronically controlled deceleration -- features that are not available with conventional mechanical park brake systems.

"Since TRW launched its first ESC and EPB systems over a decade ago, the company has continually added more features and functions while making the products smaller, lighter, and less expensive," says Pickenhahn. "By integrating the two technologies, we are able to bring the benefits of two highly sophisticated braking technologies to market where we have proven experience, both in terms of advanced engineering and systems integration."

The system will launch on C, D, E, and MPV vehicle segments in Europe and in China.