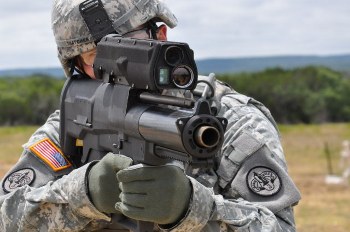 Program managers are seeking to expedite development of the system, refine and improve the technology, and ultimately begin formal production by the fall of 2014, service officials said during a roundtable, Sept. 20, at Maneuver Center of Excellence, Fort Benning, GA.

The weapon fires a high-explosive airburst round capable of detonating at a specific, pre-determined point in space near an enemy target hidden or otherwise obscured by terrain or other obstacles.

"The XM25 brings a new capability to the Soldier for the counter-defilade fight, allowing him to be able to engage enemy combatants behind walls, behind trees or in buildings," said Col. Scott Armstrong, project manager, Soldier Weapons. "The weapon fires a programmable airburst 25-mm smart round. It consists of the weapons system with a target-acquisition control system mounted on top. Development of the system is going well."

The XM25 represents the state-of-the art in terms of airburst technology, consisting of a programmable 25-mm round, a sensor, and a fire-control system, said Dr. Scott Fish, Army chief scientist.

Using laser-rangefinder technology, the fire-control system on the weapon uses computer technology to calculate the distance the round must travel in order to explode at a particular, pre-determined point in space, he explained.

"The laser rangefinder sends a pulse of light out to the target. This light pulse hits the target and is reflected back, allowing the fire-control system to calculate the distance based on the time it takes the light pulse to travel," Fish said. "Since the speed of light is known, the exact distance to the target can then be determined. Once you determine how far the distance is to the target, a computer then calculates how long it will take the round to get there."

The sensor and computer in the fire-control system calculate the time it will take the round to reach the target by factoring in the distance it needs to travel and the speed at which it travels, Fish added.

The 25-mm round is engineered with a small, chip-based sensor able to track distance in flight so that the round detonates at precisely the right distance, Fish said.

Earlier prototypes of the XM25 recently completed 14 months of Forward Operational Assessments in Afghanistan, an effort designed to provide Soldiers in combat with the advantage of having airburst technology and harvest important feedback needed to improve and refine development of the weapon's final design for production.

"The Army has learned many valuable lessons from these deployments regarding how the weapon can be deployed and how tactics can be changed to better refine the design of the weapon. Based on feedback from Soldiers and contractor testing, we have already incorporated more than 100 improvements to the systems related to ergonomics, performance, and fire control," Armstrong said.

During its initial Forward Operational Assessment, the XM25 provided a decisive advantage to Soldiers in combat in Afghanistan. While on patrol in Southern Afghanistan, Soldiers with the 3rd Brigade, 10th Mountain Division used the XM25 to engage and successfully defeat enemy forces hiding behind 3- to 4-ft walls used by Afghans to grow grapes, said Command Sgt. Maj. James Carabello, MCoE, a combat veteran who recently led infantry units in Afghanistan with the Army's 10th Mountain Division.

"We defeated any enemy force that we deployed the weapon against. The XM25 is a devastating weapons system that changes the face of battle when we are in direct-fire contact with the enemy," he said.

In fact, the latest version of the XM25 slated to deploy with Soldiers in Afghanistan in January of next year includes a range of key design improvements based on lessons learned from combat. Units using several prototype XM25s in theater were accompanied by teams of weapons experts focused on analyzing the system's performance with a mind to making needed improvements, Armstrong said.

"The kids are calling it the 'Punisher,'" Brig. Gen. Peter N. Fuller, who heads up the Program Executive Office Soldier, said in a 2011 interview referencing the Soldiers initially testing it in Afghanistan. "I don't know what we're going to title this product, but it seems to be game-changing. You no longer can shoot at American forces and then hide behind something. We're going to reach out and touch you."

Modernization and improvements to the XM25 and other weapons are also based heavily upon Soldiers' experience in combat and the tactics, techniques, and procedures used to maximize their effect.

Therefore, the Army initiated a pilot program aimed at helping Soldiers train and prepare for the many contingencies of combat. The Advanced Situational Awareness Training program at Fort Benning's Maneuver Center of Excellence consists of either a five- or 22-day "train the trainer" course with intense classroom teaching and field exercises, said Command Sgt. Maj. Shawn Cook, 197th Infantry Brigade.

"We are required to put our Soldiers in harm's way, and greater situational awareness provides them with more mission success and a safer environment. This training allows Soldiers to better recognize human behaviors in their surroundings, enabling them to make better decisions. Soldiers who have deployed after this training say that it makes a big difference in the outcomes on the battlefield, increases effectiveness, and saves lives," Cook said.