It's all about texture:
New surface design could improve condenser performance 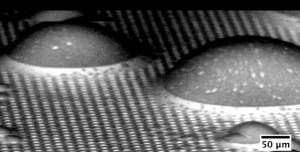 Condensers are a crucial part of today's power-generation systems: About 80% of all the world's powerplants use them to turn steam back to water after it comes out of the turbines that turn generators. They are also a key element in desalination plants, a fast-growing contributor to the world's supply of fresh water.

Now, a new surface architecture designed by researchers at MIT holds the promise of significantly boosting the performance of such condensers. The research is described in a paper just published online in the journal ACS Nano by MIT postdoc Sushant Anand; Kripa Varanasi, the Doherty Associate Professor of Ocean Utilization; and graduate student Adam Paxson, postdoc Rajeev Dhiman, and research affiliate Dave Smith, all of Varanasi's research group at MIT.

The key to the improved hydrophobic (water-shedding) surface is a combination of microscopic patterning -- a surface covered with tiny bumps or posts just 10 micrometers (millionths of a meter) across, about the size of a red blood cell -- and a coating of a lubricant, such as oil. The tiny spaces between the posts hold the oil in place through capillary action, the researchers found.

The team discovered that droplets of water condensing on this surface moved 10,000 times faster than on surfaces with just the hydrophobic patterning. The speed of this droplet motion is key to allowing the droplets to fall from the surface so that new ones can form, increasing the efficiency of heat transfer in a powerplant condenser, or the rate of water production in a desalination plant.

With this new treatment, "drops can glide on the surface," Varanasi says, floating like pucks on an air-hockey table and looking like hovering UFOs -- a behavior Varanasi says he has never seen in more than a decade of work on hydrophobic surfaces. "These are just crazy velocities."

The amount of lubricant required is minimal: It forms a thin coating and is securely pinned in place by the posts. Any lubricant that is lost is easily replaced from a small reservoir at the edge of the surface. The lubricant can be designed to have such low vapor pressure that, Varanasi says, "You can even put it in a vacuum, and it won't evaporate."

Another advantage of the new system is that it doesn't depend on any particular configuration of the tiny textures on the surface, as long as they have about the right dimensions. "It can be manufactured easily," Varanasi says. After the surface is textured, the material can be mechanically dipped in the lubricant and pulled out; most of the lubricant simply drains off, and "only the liquid in the cavities is held in by capillary forces," Anand says. Because the coating is so thin, he says, it only takes about a quarter- to a half-teaspoon of lubricant to coat a square yard of the material. The lubricant can also protect the underlying metal surface from corrosion.

Varanasi plans further research to quantify exactly how much improvement is possible by using the new technique in powerplants. Because steam-powered turbines are ubiquitous in the world's fossil-fuel powerplants, he says, "even if it saves 1%, that's huge" in its potential impact on global emissions of greenhouse gases.

The new approach works with a wide variety of surface textures and lubricants, the researchers say; they plan to focus ongoing research on finding optimal combinations for cost and durability. "There's a lot of science in how you design these liquids and textures," Varanasi says.

Daniel Beysens, research director of the Physics and Mechanics of Heterogeneous Media Laboratory at ESPCI in Paris, says the concept behind using a lubricant liquid trapped by a nanopatterned surface is "simple and beautiful. The drops will nucleate and then slide down quite easily. And it works!"

Further research will be aided by a new technique Varanasi has developed in collaboration with researchers including Konrad Rykaczewski, an MIT research scientist currently based at the National Institute of Standards and Technology (NIST) in Gaithersberg, MD, along with John Henry Scott and Marlon Walker of NIST and Trevan Landin of FEI Company. That technique is described in a separate paper, also just published in ACS Nano.

For the first time, this new technique obtains direct, detailed images of the interface between a surface and a liquid, such as droplets that condense on it. Normally, that interface -- the key to understanding wetting and water-shedding processes -- is hidden from view by the droplets themselves, Varanasi explains, so most analysis has relied on computer modeling. In the new process, droplets are rapidly frozen in place on the surface, sliced in cross-section with an ion beam, and then imaged using a scanning electron microscope.

"The method relies on preserving the geometry of the samples through rapid freezing in liquid-nitrogen slush at minus 210 degrees Celsius [minus 346 degrees Fahrenheit]," Rykaczewski says. "The freezing rate is so fast (about 20,000 degrees Celsius per second) that water and other liquids do not crystalize, and their geometry is preserved."

The technique could be used to study many different interactions between liquids or gases and solid surfaces, Varanasi says. "It's a completely new technique. For the first time, we're able to see the details of these surfaces."

The enhanced condensation research received funding from the National Science Foundation (NSF), the Masdar-MIT Energy Initiative program, and the MIT Deshpande Center. The direct imaging research used NIST facilities, with funding from an NSF grant and the Dupont-MIT Alliance.