Astrobotic Technology has completed assembly of a full-size prototype of Polaris, a solar-powered robot that will search for potentially rich deposits of water ice at the moon's poles. The first of its kind, Polaris can accommodate a drill to bore 1 m into the lunar surface and is being designed to operate in lunar regions characterized by dark, long shadows and a sun that hugs the horizon. 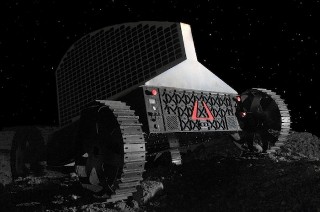 The 5 1/2-ft-tall Polaris aims to drill for water ice on the moon.

Astrobotic, a Carnegie Mellon University spinoff that develops robotics technology for planetary missions, is developing Polaris for an expedition to the moon's northern pole. It would launch from Cape Canaveral atop a SpaceX Falcon 9 launch vehicle. The company, in partnership with CMU, seeks to win the Google Lunar X Prize of more than $20 million.

Polaris is a flight prototype but has the same configuration as the rover that will eventually land on the moon. This will enable Astrobotic team members to spend the coming months testing and improving the robot's computer vision, navigation, and planning software, and software that can plot the rover's position on the moon within 10 ft. It includes a number of flight-worthy components, including wheels and chassis beams constructed of light, but tough, composite materials.

"It is the first rover developed specifically for drilling lunar ice," says William 'Red' Whittaker, Astrobotic CEO and founder of the Field Robotics Center at CMU's Robotics Institute. Other robots built by the Field Robotics Center have developed technologies necessary for lunar drilling, but none of those machines was ever meant to leave Earth. "What Polaris does is bring those many ideas together into a rover configuration that is capable of going to the moon to find ice," he says.

Observations by NASA and Indian spacecraft suggest that a substantial amount of water ice could exist at the lunar poles. That ice could be a source of water, fuel, and oxygen for future expeditions.

To find the ice, a rover must operate as close to the dark poles as possible, but not so far that it can't use solar arrays for power, Whittaker says. So Polaris has three large solar arrays, arranged vertically, to capture light from low on the horizon. The solar arrays will be capable of an average of 250 W of electrical power.

Polaris also makes use of software, pioneered in CMU's NASA-funded Hyperion robot, that keeps track of the rover's position relative to the sun's rays to maximize solar energy and husbands battery power for use in the long shadows and dark regions found at the poles.

Polaris, 5 1/2 ft tall, 7 ft wide, and almost 8 ft long, can move at about 1 ft/sec on 2-ft-diameter composite wheels. Like Scarab, a NASA-funded robot built by CMU, its suspension will enable the rover to rise up over rough terrain, but also lower itself to the ground to perform drilling. The rover will weigh 150 kg, or about 330 lb, and can accommodate a drill and science payload up to 70 kg, or a bit more than 150 lb.

"The composite materials are of aerospace quality, and that's a huge step up for us," Whittaker says. The lighter structural materials are essential for Polaris to accommodate the heavy drill as well as the massive batteries it will need for low-light operations. The carbon fiber and Kevlar materials also are important to the mission because they won't release gases in the moon's hard vacuum. The robot's science package will include gas sensors that could be disrupted by such out-gasing, he explains.

Whittaker says the lunar day lasts about 14 Earth days, though only about 10 days are suitable for water prospecting at the poles. The Astrobotic team expects Polaris could drill 10 to 100 holes during that time as it locates and characterizes water ice deposits. But if Polaris successfully survives the long, frigid lunar nights, as anticipated, the prospecting mission could be extended indefinitely.

Astrobotic has won nine lunar contracts from NASA worth $3.6 million, including one to evaluate how Polaris can accommodate NASA's ice-prospecting instruments during a three-mile traverse near the moon's north pole.

Astrobotic earlier developed a robot called Red Rover suitable for equatorial destinations. The design of Polaris is significantly different, reorienting the solar arrays to capture tangential light, rather than the overhead light of equatorial regions. It also is larger and generates more power to operate the science package. Griffin, a lunar landing vehicle being developed by Astrobotic, can accommodate either rover.