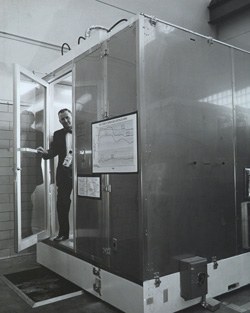 When Willis Whitfield invented the modern-day cleanroom 50 years ago, researchers and industrialists didn't believe it at first. But within a few short years, $50 billion worth of laminar-flow cleanrooms were being built worldwide -- and the invention is used in hospitals, laboratories, and manufacturing plants today.

The retired Sandia National Laboratories physicist, who passed away this November at age 92, was dubbed "Mr. Clean" by TIME Magazine at the time, but the travel, scientific presentations, and accolades didn't change the unassuming scientist, who was always modest about the invention that revolutionized manufacturing in electronics and pharmaceuticals, made hospital operating rooms safer, and helped further space exploration.

Sandia President and Labs Director Paul Hommert remembered Whitfield as a Sandia pioneer. "Willis Whitfield represented the very best of Sandia. An exemplary researcher, a physicist who became and an engineer's engineer, Willis lived in that sweet spot where the best technical work is always done, at the intersection of skill, experience, training, and intuition," Hommert said. "His breakthrough concept for a new kind of cleanroom, orders of magnitude more effective than anything else available in the early 1960s, came at just the right time to usher in a new era of electronics, health care, scientific research, and space exploration. His impact was immense; even immeasurable."

"When Willis invented the cleanroom, he did so to improve the reliability of miniature mechanical components for Sandia systems. Little did he know his invention would enable the semiconductor industry, and thereby enable all modern electronics, computers, and information technologies," Herrera said. "It has also enabled breakthroughs in biotechnology, nanotechnology, health sciences, and healthcare."

Today, cleanrooms and clean benches based on Sandia's design are used in the manufacture of precision mechanical assemblies for systems designed at the national security laboratory, Herrera said.

Whitfield, the son of Texas cotton farmers who learned to do for themselves by fixing their own equipment, was asked to solve a manufacturing problem for Sandia, so he invented the laminar-flow cleanroom. With slight modifications, it is still the standard.

"He built it, found out no one had done it that way before, and said, 'I don't understand why [no one had invented it]. It's so simple,'" recalled his son, Jim Whitfield, who was a young child at the time. "I heard someone ask him how long did it take him to think of that idea, and he said, 'Five minutes. I just did the obvious thing.'"

Sandia historian Rebecca Ullrich said it wasn't quite that easy.

Solving a problem
In 1959, nuclear weapons components -- mainly mechanical switching parts -- were becoming smaller, and microscopic dust particles were preventing Sandia from achieving the quality the laboratories needed. So Whitfield's supervisors asked his group to find a solution, Ullrich said.

While Whitfield might have come up with the idea quickly, months of research led up to that moment of discovery, Ullrich said. Whitfield discovered the practice at the time was to tightly seal cleanrooms, wear protective clothing, and vacuum often. Still, the airflow was turbulent in existing cleanrooms, and particles introduced were not removed. These measures didn't create the necessary conditions for manufacturing close-tolerance parts, she said.

Whitfield looked at blowers, vents, grading, and the cost per square foot to build his invention, so it would be something people could afford.

By the end of 1960, Whitfield had his initial drawings for a 10-by-6 cleanroom. His solution was to constantly flush out the room with highly filtered air. In that first model, Whitfield designed a workbench along one wall. Clean air entered the room from a bank of filters that were 99.97 percent efficient in removing particles larger than 0.3 microns. For example, cigarette smoke blown in one side comes out the other as clean air, according to a 1962 Sandia Lab News article.

The air is circulated in the room at a rate of 4,000 cubic feet or about 10 changes of air per minute, an amount of air movement that is barely perceptible to the workers inside. The linear speed of air is slightly more than 1 mph, which is about the same as that felt walking through a still room.

In a later modification, the air was passed down over the work area instead of across, getting an assist from gravity in carrying troublesome particles into the floor, which was covered with grating. Filters underneath clean the air, and it is circulated back around to re-enter the room. The constant flow of clean air performs a sweeping function.

When the first cleanroom was tested, "the dust counters went to nearly zero. We thought they were broken," Whitfield said in a 1993 videotaped interview at Sandia.

The laminar-flow cleanroom created a work environment that was more than 1,000 times cleaner than the cleanrooms in use at the time.

According to tests at the time, the laminar-flow cleanroom's work area contained an average of 750 dust particles one-third of a micron in size or larger per cubic foot of air. (A micron is equal to 40-millionths of an inch.) That's compared to average dust counts of more than 1 million particles per cubic foot of air in one of the best conventional cleanrooms in use at the time.

Bringing the cleanroom to the world
Whitfield gave his initial paper on what was then called the "ultra-cleanroom" at the Institute of Environmental Sciences meeting in Chicago in 1962. 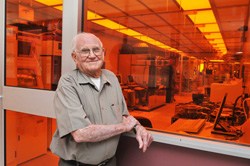 Whitfield lived long enough to see his invention mark its 50th anniversary this year. Here he pauses during a tour of a cleanroom in Sandia's Microsystems Engineering Sciences and Applications (MESA) complex. [Photo: Randy Montoya]

After the meeting and publicity, Whitfield's phone never stopped ringing, Ullrich said. "Industry jumped all over it."

But at a standing-room-only talk about a year later at the American Society for Contamination Control in Boston, manufacturers challenged the invention's claims, accusing Whitfield of perpetuating a hoax, Ullrich said.

Jim Whitfield remembers his father's story about that meeting: "The numbers he was showing were unbelievable. At this conference, people were telling him that can't be right. Then, one of his colleagues [from Bell Labs] got up and said he thought Whitfield was wrong. His numbers are 10 times too conservative. So, he knew at that point that it was a dramatic shift in the technology."

Others recognized it too, and within a couple years, $50 billion worth of cleanrooms had been built worldwide.

"When you have something that everyone wants, they come to you," Whitfield said in the 1993 interview. "The desperate need for this accelerated the gap between development and production drastically."

RCA and General Motors Co. were early adopters of the cleanroom, and the invention revolutionized the pharmaceuticals and microelectronics industries, Ullrich said.

Whitfield eventually worked with NASA to provide planetary quarantines during missions to the moon and Mars and spacecraft sterilization techniques, Ullrich said.

But fame did not change Whitfield.

"He's a nice guy, very honest, very straightforward," Ullrich said. "He's very modest about it. His values mean he's going to do the right thing. He makes sure other people share credit for things."

The cleanroom design also made it possible for Sandia to standardize cleanrooms for the first time in 1963 for the federal government.

Whitfield lived to see his invention turn 50 this year, but was unable to give an interview, so his son spoke for him, saying, "I'm sure in his heart, he feels very satisfied that he's made such a big and positive impact on society."